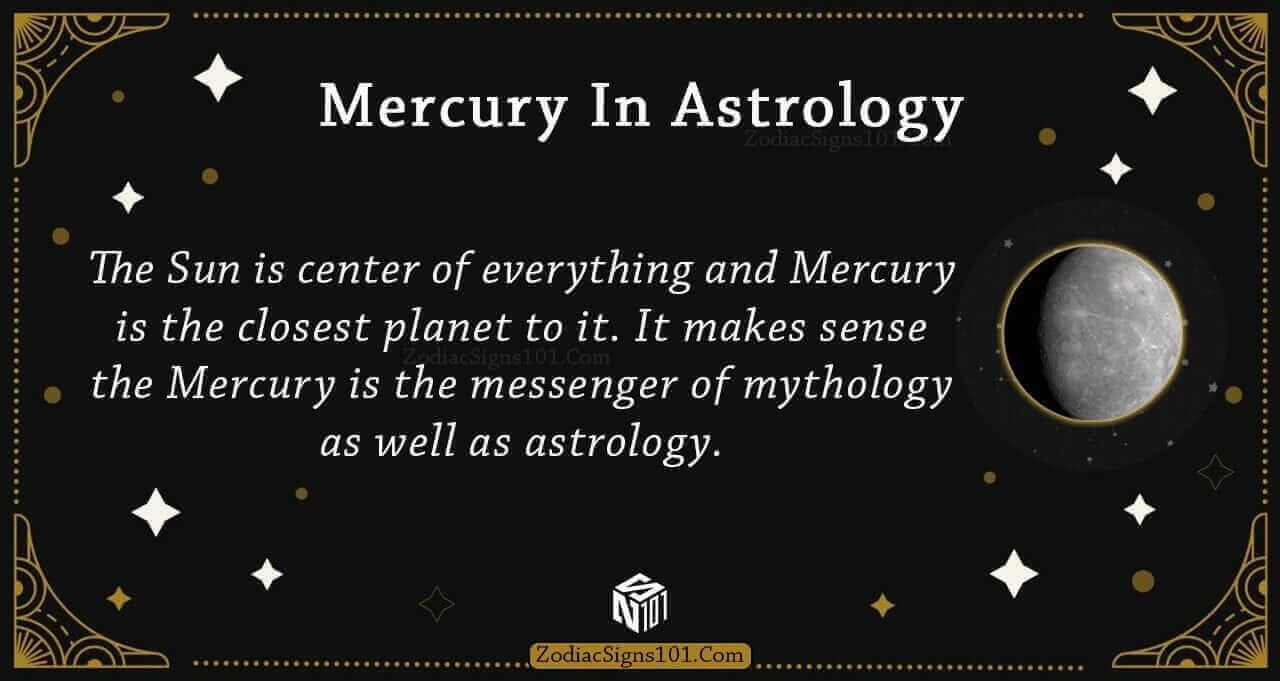 The Sun is center of everything and Mercury is the closest planet to it. It makes sense the Mercury is the messenger of mythology as well as astrology. Mercury in astrology is sometimes seen as a trickster like Loki in Norse mythology, but this little planet does not get enough credit for everything that it actually helps with.

While Mercury in astrology rules over Geminis and Virgos, it is important to know that it does more than just help those two zodiac signs. Mercury in astrology helps everyone with formulating thoughts and ideas, with coordination, and communicating. This is everyday life, as well. It is not simply a one-time thing. Mercury has a large role in how things happen for how small it is.

Mercury is the smallest planet in orbit and of the fastest. Earth has one year in time Mercury has three. Throughout history, many ancient peoples actually believed that the planet was two different stars because of how fast it moves. Depending on the time of year, Mercury was seen in the morning and again in the evening.

A planet being in retrograde is a terrible thing and it can really mess things up. When Mercury is retrograde, things get turned upside down. People are easily confused, plans bite the dust, people can not understand each other, and they things just stop going as they should.

People who are great at commuting with wit and sarcasm have trouble forming good ideas quickly and they have trouble voicing those ideas. On the other hand, the people that are awkward and can hardly get across with small-talk become smooth talking and have no trouble coming up with quips that they would usually come up with minutes too late.

Elements and Mercury in Astrology

Mercury in astrology works in different ways with each of the four elements: Air, Water, Earth, and Fire. When working with Air, Mercury is best suited to this element so people under this element are amazing at logical thinking and doing it rationally. Water and Mercury working together gives the person a bit of an emotional filter and give them a rather strong feeling for their instincts. Mercury and Earth leave no room for debate; they make a very strong and steadfast team. And lastly, Fire and Mercury create very fast, spur of the moment, inspirational, and instinctive thinkers.

How Mercury in Astrology Affects Personality

There are first impressions that people make on each other- it’s how we decide who we are friends or who we do and do not get along with. Since Mercury in astrology sets how humans analyze things and interact with each other, Mercury controls these first impressions. Mercury takes it one step further to set everyone’s senses of humor, how quickly they think and understand things, speech patterns, and how they communicate.

Mercury in astrology controls how people communicate the best. This planet determines how they best express themselves and then further helps them to use the mean as best they can. Whether you are loud and verbal or quiet and prefer to write things down; hiding your emotions or crying easily; bossing everyone else around or following orders. That is all decided by Mercury.

Much like how Mercury in astrology works with the different elements, the planet also works differently with each zodiac sign. Two people might agree on something, but they came to the same conclusion in two totally different ways. They might not understand how they got there, but they agree nonetheless. Maybe two people have the same way of thinking but they come to different answers or there is a combination of the two where they have a totally different way of thinking which leads them to totally two different answers.

All in all, Mercury has a role in the play of everything that is much larger than it is. Mercury in astrology controls how people talk to each other and see each other. It plays a part in who everyone is overall and how they think. It can be a little confusing to understand how Mercury plays such a large role, but when one starts looking into how all of the planets, elements, houses, and everything in astrology tie together to make a person, it is really impressive and interesting.