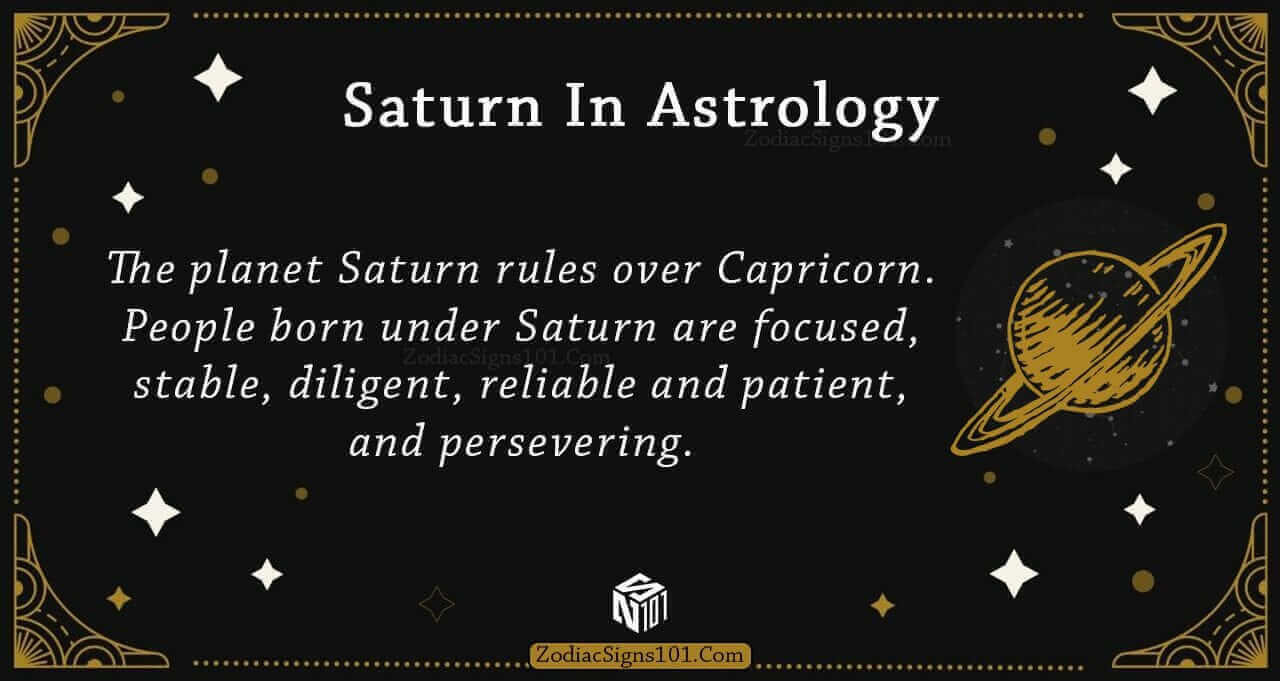 The planet Saturn rules over Capricorn.  Saturn in astrology rules over self-control, limitation, and restriction. These restrictions can come in just about anywhere by making sure we know when we are supposed to do things, what we are supposed to be doing those things and making sure we do not overstep a boundary somewhere along the way.  Saturn in astrology is also the known ruler of fathers or father figures, people who bring discipline and order to our lives, and tradition.

Saturn is one of the hardest planets to see from Earth. From Earth, it looks hazy at best. The planet is surrounded by rings composed of ice and dust. The thin, yet wide, ring around it does not make Saturn an ice giant. However, it does hint at the role the planet plays in astrology.

Unlike most planets, Saturn has 62 moons. Most of its moons are named after the different Titans in Greek mythology. However, not all the names come from Greek stories. Some names come from stories of Inuit, Norse, or Gallic origin.

It should be kept in mind that Saturn in retrograde does not always make things more intense; it depends on the person. This is the time when Saturn gets karma in motion. For people who work hard, they are likely to get a break when Saturn is in retrograde. On the other hand, if someone has been slacking, then they may be punished by Saturn. In this case, someone may have to work overtime or take on another person’s responsibilities.

How Saturn in Astrology Affects Personality

Saturn is the ruler of order in things. People heavily guided by this planet are often sterner than others. That does not mean they are mean, rude, or cruel. It just means that they can make decent leaders or helpers to the leaders. People born under Saturn are focused, stable, diligent, reliable and patient, and persevering.

Despite these people being good at keeping others in line, they can sometimes use a bit of reminding themselves. This because they have a habit of being a bit selfish. When someone who is best at teaching and disciplining is selfish, it can lead to a number of problems that can be difficult to correct quickly. The mentioned selfishness can cause others around them stress and self-doubt. Also, if someone knows that something bad is being done to someone else, and they do not act on it, they will be negatively affected.

Saturn is the second largest planet in the Solar System, but an even more interesting thing about this planet is that it makes gives off more energy than what it gets from the Sun. This is impressive. It is also the reason behind why Saturn in astrology is so great at leading the people following it to produce. The planet is teaching its followers to draw what energy it can from their reserves, but Saturn also makes sure that they replenish those later on.

There is a fun and somewhat meaningful lesson behind Saturn being the ruler of self-control. In Greek mythology, Saturn is called Cronus. Zeus, and some other Greek gods, are Cronus’s children. Cronus would eat his children so that none of them would dethrone him and end his rule. It was was his, Rhea, that ended his rule by having gotten him to swallow a rock or stone after Zeus was born. Perhaps, it is Saturn that controls these things so we are not met by an end brought by greed.

While Saturn is the control of limitation, there are times when a person cannot control their schedule. Sometimes there is a day where there is not a whole lot going on so people can breathe. It is Saturn that grants those because even limitations have their restrictions. The famous Oscar Wilde said: “Everything in moderation, including moderation.”  These sudden breaks do not just occur when the person has been working too hard for themselves. They can also when the person tries to do too much of someone else’s work. Stress can sometimes cause illness.This too is Saturn trying to make them rest after they have pushed themselves too hard too fast or for too long.

Saturn is the planet that keeps everyone on time and on task. They are good at it and by keeping others in line they themselves in line most of the time themselves. This planet keeps track of different things like what happened and when. When someone stays on task, they will be rewarded. Most of the time, this has to do with having more free time. When someone slacks, they can be punished by having to do more work.

People have a sense of what it is that they need to do in a day and how long they have to do it. That is part of the boundary setting that people get from Saturn. Saturn in astrology reminds people, sometimes in the kindest way, that people do have to stick to their promises and obligations even if they do not feel like it on a given day.

Saturn does not affect the careers that people consider like most of the other planets do. Saturn does not have a very strong effect on what someone’s interests or hobbies are, but it certainly does have a tilt on what someone is good at. Most people who are guided by Saturn prefer to make things with their hands. They do not make for good office workers because they prefer to work with raw materials instead.

Looking into raw materials, people guided by Saturn might want to try looking into practical hobbies. These might include farming, masonry, leather tanning, dying fabrics or paints, pottery, sweeping or going into plumbing, selling materials as a merchant, or even shoemaking.

Not all people are up for jobs like that but they still prefer something that keeps them moving. They are not likely to take on a boring desk job. Something more along the lines of Watchmen, miner, or jailer would be better for them.  This is the case if they do not have a job related to their hobby.

Saturn is the master of time, limitations, tasks and ambition, as well as karma. This planet keeps everyone in line concerning when they have to get something done. People born under Saturn might not be heavy into books and learning in the classroom, but they do love to learn. They can definitely get their hands on something and own it in a way you can not learn from a book.