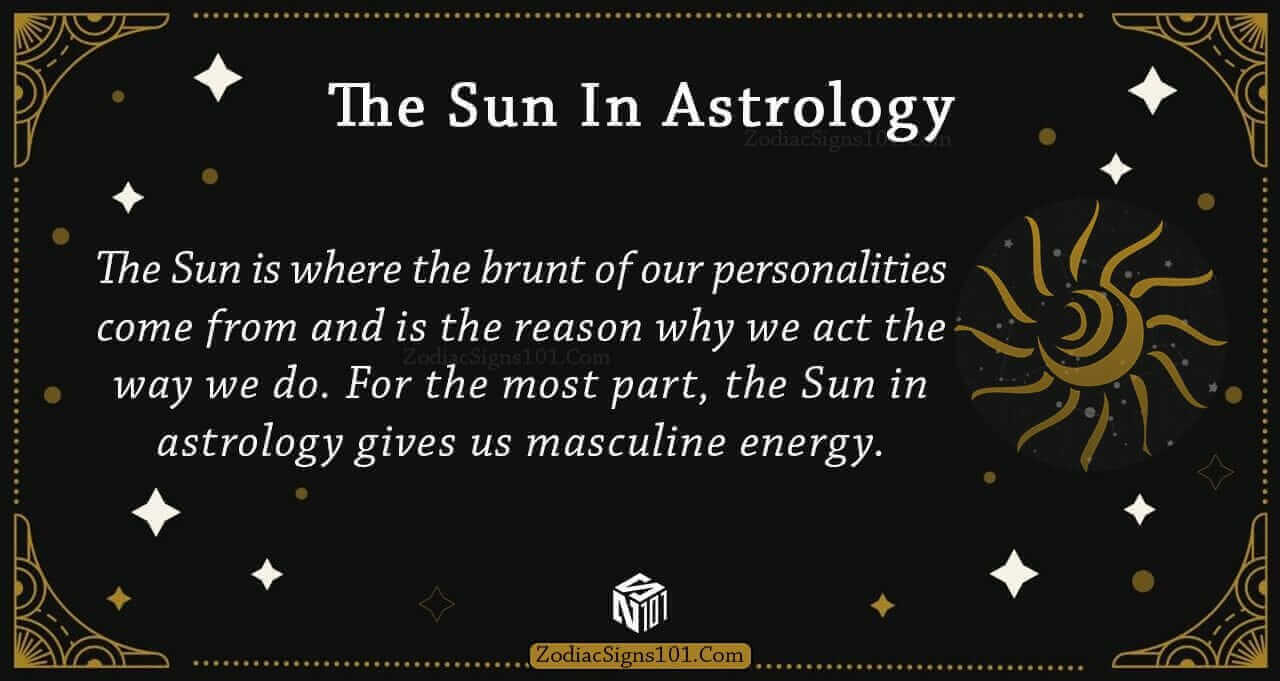 The Sun in Astrology

The Sun is where the brunt of our personalities come from and is the reason why we act the way we do. For the most part, the Sun in astrology gives us masculine energy. The Sun in astrology even gives women a bit of masculine energy, but that is mostly hinting at the men in their lives. Every adult has an inner child and every child has an inner adult. This comes from the Sun too. The sun gives aid when we need to make a decision about something.

The Sun, believe it or not, takes up 99 percent of the Solar System’s mass. Jupiter is the largest planet in orbit but is still all but pea-sized when compared to the Sun. It should also be noted that in astrology, the sun is considered a planet.

The Sun vs the Moon

When you look at the Moon in astrology, the Moon reflects on the past. However, without this planet’s influence here and now, the Moon’s job would be of little importance so it is important to have that balance. The two need to work together to complete a person. Without the Moon, there would be little to no growth from the memories that the Moon holds so dear and analyses so deeply.

So while the two are as different as can be, they need each other so that the people they are leading can exist in harmony with themselves and others around them. While a person’s sun sign affects their dominant personality traits, their moon sign also has a big part to play.

The Sun in Retrograde

The Sun, like the Moon, does not go into retrograde. This is helpful because the Sun has the final say on who people are how they act. The other planets might have a part in how someone’s personality goes, but the Sun in the person in their purest and rawest form.

When the other planets go in retrograde the Sun staying on its proper course can do wonders for help people to not lose the hold on who they are. Things or certain sides of someone might a bit backward but the sun keeps them from completely unraveling.

How the Sun Affects Personality

People who are guided by the Sun tend to be a little self-centered, which are understandable considering that the Sun is the center of the universe. This planet is where people get the feeling of joy and pride when they finish a project or do well on something. Like Mars and Jupiter, the Sun in astrology plays a part in the drive, dedication, and passion that people possess.

While all of the above sounds great, it should be noted that since this planet in the center of everything, that can result in people being guided by the Sun being arrogant. They can also build up a strong sense of self-confidence that can come back to nip them later if they let it go to their heads.

People who are in tune with the Sun are usually some of the happiest people you will meet. Some assume that their happiness is just in their nature, but that is not always case. Sometimes, the Sun has to give light on how to find that happiness and that can take a good while to get the hang of.

People guided by the Sun are strong leaders that make their own path. This can play into their ego to some degree. This planet gives people self-confidence and energy. That has a role in what the people are able to get done. By getting things done, people who are ruled by this planet can let that go to their heads. That is where their ego comes from.

While getting things done is good and the world needs good leaders, the leaders can get into the habit of bragging over the things they have done. However, people who have a high ego do not always use it to get what they want for personal gain. Some people use their ego to toss their own name around for a cause. While that can work for some things, they should be careful with that sort of thing.

The Sun in astrology likes to play around with the interests of the people who follow it. That means when and how people take risks, how patient someone is, and it plays with where our curiosity comes from by shining light the subject. So when someone picks up a habit or new class, it’s fair to say that this planet might have some influence on that. Since the Sun also has a role in people’s drive, passion, and dedication that affects our talents.

Talents and ego can affect each other. Getting good at something can increase the ego and put another feather in the hatband. The Sun in astrology, in a way, is feeding into itself. It helps us to find our talents which then feeds into our ego.

People guided by the Sun like jobs best where they are leading others or at the very least where people are not telling them what needs to be done. They should consider jobs like heads of a school board or district, being the director of a bank or company, or joining the military and working their way up the ranks (that also carries a strong amount of adventure that should please them).

The Sun ties our personalities and who we are together fully. The other planets have a role in who we are but seeing as this planet is the center of the Solar system, is thereby the center or core of our beings. Without the Sun, we would not be able to find things like our passions and talents as easily. This planet more or less keeps us check or at least tries its best. It tells us when and where to let our inner child out and when we have to real it back in.