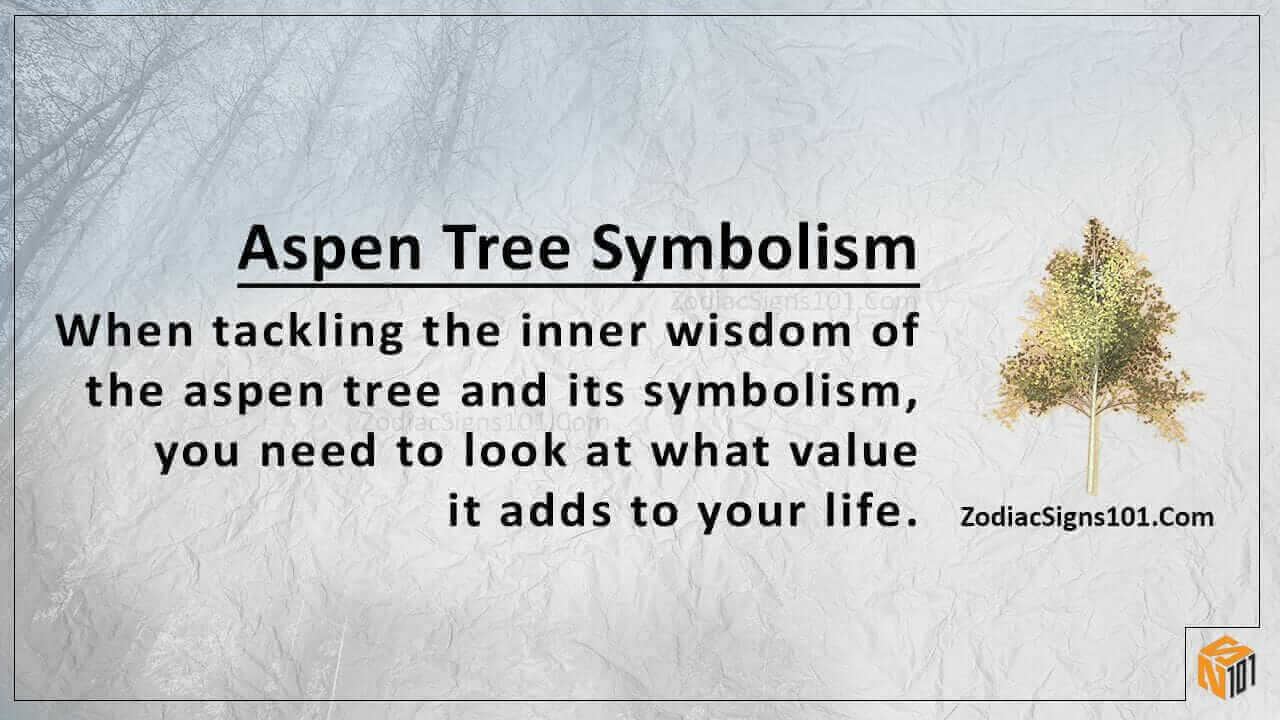 Aspen Tree Symbolism: What are Some of the Meaning and Importance of this Tree?

The aspen tree symbolism represents what one can call the natures purest form of beauty. This is because it has such an immaculate bark and golden leaves during the autumn. The sight of this tree is truly mesmerizing. It is one of the trees that are indigenous to the Northern part of the New World. Or you can say the United States of America.

The Native Americans thought of it as the accurate depiction of human life. Although, some of the used it as a way of making their tools. As people got to interact with this tree more and more, they got to appreciate their spiritual value. Also, some of the people in North America would use its roots for magic in the old days.

They had the belief that it would open up a portal from them into the spirit world. In the same sense, the roots of this tree have the symbol of enlightening one. It can give one higher wisdom and intuition of the spirit realm. Or, you can look at it as a way of bringing spiritual awareness to the people of the earth.

Symbolic Meaning of the Aspen Tree

When tackling the inner wisdom of the aspen tree and its symbolism, you need to look at what value it adds to your life. For example, there is the possibility that the aspen trees symbolize the need for adventure in life. Therefore, its power will push you to attain the real goals that you have in life.

After attaining such wisdom, you can soar and find your path. It provides you with the courage to go for the things that you need in life. Therefore, you will always express yourself more often. In some circles, the aspen tree is the force behind the truth of understanding true love. It will also show your love is one of the most influential powers of the universe. Moreover, with it, you can conquer the whole world.

You will also learn that you need to have confidence in the things that you learn. It will help apply to your life with a lot of confidence. Moreover, that physical pain is just a barrier from real happiness. Learn to master suffering and worry so that you can overcome both of them. By doing all of this, you will have the opportunity to know pure joy in your life.

The Aspen Tree in the Celtic Culture

The legends of the Celts depict the aspen tree as a dancing tree with many colors. As per their beliefs, they say that you had to watch the aspen tree closely to connect with its deeper meaningfully. So, they would let themselves in a trace or relaxed state of mind. Some of them would also meditate with their roots. This way you get to loosen up and view the world from a new perspective. Plus, the body will get time to release all the tension that it has.

In some days the skin/ bark of the tree shines in the lights during the whole tree signs or quivers in the wind. Try to set your gaze upon the magnificence of the tree. In time you will find yourself vibrating with the same frequency with the tree. Did you know that this one of the ways of the ancient druids? Moreover, they would teach people how to perform such trances. While in such a meditative state, they would also happen to foresee the future.

The aspen Celtic tree was there to teach the people the need to be one with nature and respect it. Also, they would use it to attain valuable lesson on how to be pure. On the other hand, they would need to have the opportunity to grab the opportunities they get in life with courage. Fear is not the way for the druids, so they taught on how to overcome it.

Aspen Tree Symbolism: The Religious Point of View of the Christians

This was because it was the wood used to make Christ’s crucifix. After brainwashing the people so much, the new generation of the Celts and druids developed doubt on the meaning of the aspen tree. They also associated with aspen tree to death and communication with the spirits of the dead. In most of the cases, the people thought that the rod made from the aspen tree would ensure that death was not the end of things.

The Pathway to the Spirit World

As the aspen would quiver and sign to the sways of the winds, the druids would say that this was the communication between worlds. So, one that wanted to hear what the trees were saying and join the conversation had to induce a trance on themselves. The discussion was a way of bringing inspiration and confidence to the living people. They then would know that death was not the end of life. Moreover, their ancestors were able to speak back to them.

In life, the aspen tree represents the purest form of faith on something that no one can see. This is because it can provide a pathway of commuting and talk with their ancestors. However, the meaning of this beautiful tree is getting lost to due to the interference of the Christians. This was after they made their way to the home of the ancient druids. They then changed the narrative of the aspen tree.