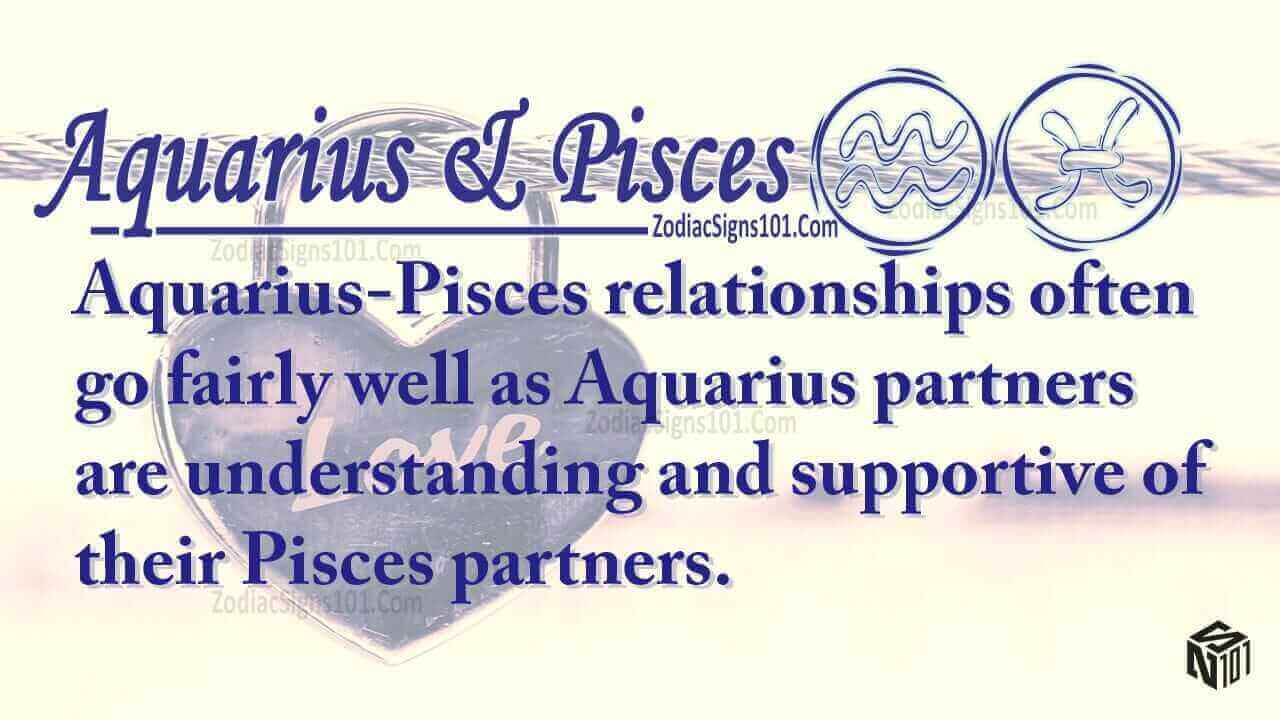 Aquarius Pisces love compatibility has its highs and lows. It has its challenges and benefits, and this article will explore them all.

Aquarius (January 21 – February 19) is known for their creative expression and independent spirit.  They’re as smart as they are creative, which shows in the way they talk as well as the work they produce.  While they can be artists, they can create beautiful things with just about anything through their exploration and thinking.  Whether it’s a combination of flavors using unique ingredient pairings or an architectural masterpiece, they’ll learn by trying until they’re happy with it.  They try not to put too much emotion in their work, which is why some people they meet consider them to be detached. But they’re good friends who’ll support others in their projects and passions with their contributions.  It isn’t likely to find them flipping burgers or selling t-shirts, so the way they make money won’t be anything that’ll bore them.  Their love life is full of engaging conversation and a common interest in exciting things.

Pisces (February 20 – March 20) is a daydreaming, passionate individual who loves to spend time with others.  It’s a bit more difficult for them to do things on their own, so working with others is best when it comes to finishing things.  They love to please others, and they’ll do so by going out of their way to make someone feel better.  Their intuition is very good at anticipating the needs and wants of others.    This sign is very romantic.  The intuitive attention they put into helping others is also a part of making their partner happy.  Their creative passion can be fun in the bedroom.  When they’re in a positive and supportive relationship, they’ll be able to balance their life and emotions.

The intuitive and imaginative personalities that these two signs have can make life interesting for them.  If they go into the relationship with preconceived ideas, they may not find what they’re looking for.  Instead, they’ll find something that’s complementary and beyond their expectations of a long–term relationship.

Aquarius is full of creative ideas and looks forward to the time that they can focus on their passions in life.  While they may not think they need someone to be supportive of their goals, they’ll find that support when they’re in a relationship with Pisces.  This sign will admire their strength and intelligence and show their pride to the point of bragging.

One of the best ways that Pisces can show how much they appreciate and admire their partner is by taking care of their needs.  Pisces will be more than happy to take care of household responsibilities like cooking, cleaning, and paying the bills.  All of these things aren’t Aquarius’ strong suits.  Their partner will also be in tune with their needs.  This can range from anything like preparing a cup of tea if they have a cough or recording favorite TV shows if they’re going to work through it.  Sometimes they’ll do little favors to get some attention, and it’ll work!

The only thing that Pisces will want out of all of their work is appreciation for their efforts and a little bit of love and attention.  And Aquarius will undoubtedly show their gratitude.  They may take their partner to places for a little bit of excitement and share something they love.  They’ll also show their appreciation in the bedroom.  Both of them are creative and willing to try new things, especially to stimulate their passionate side.  Pisces uses their sense of touch to bring their lover to satisfaction.  Aquarius can use that skill and try something new every night.  They’re only limited to their flexibility and energy, but many times that isn’t an issue.

It isn’t always easy for a relationship to get started with these two signs.  Even though they’re both considered to be social signs, it can be difficult for them to meet and start a conversation.  Aquarius comes across as uninterested while Pisces is shyer and won’t directly introduce themselves.  Their emotions can make them hesitant, and they won’t start something if they get a sense that they cannot make the other person happy.  They may test the waters with anonymous love notes or asking others to inquire of Aquarius’ interest.  Any attempts to connect are more likely to be a miss because of the lack of direct effort.

Their mismatch of emotions can also get in the way of a compatible, long-term relationship.  The emotional detachment of Aquarius can make them oblivious to anything that may be bothering their partner.  Pisces can be flexible, but they can also be moody.  They may hide it by not being direct and talking to their partner.  Confrontation isn’t something they’re comfortable with.  They’re more likely to hold on to those negative emotions until they cannot take it anymore.  Aquarius may have no idea what’s going on because they were left in the dark as to how it was affecting their partner. Communication is the only way to save each other from letting their emotions get out of control.

One of the worst fears for Pisces is getting their heart broken.  If Aquarius is looking for an affair, the lack of faithfulness will amplify Pisces’ feelings of low self-worth. Aquarius, on the other hand, sees nothing wrong with a relationship on the side.  If it’s going to be an all-or-nothing relationship, then Aquarius needs to make that decision before they make Pisces even clingier or more despondent.

When it comes to compatibility, these two signs can be a hit or a miss.  Their partnership can be filled with adventure and imagination as they complement each other with the strengths they bring into their love life.  There are many ways that they understand each other.  When they focus on each other, they’ll find that they have a lot to share. However, they need to be able to communicate how they feel, especially in the areas that they’re different.  Aquarius has to be honest about their faithfulness, and Pisces has to learn how to say no before they start to feel overwhelmed.  Pisces also needs to be able to get out of their shell more because the lack of confrontation can mean that their partner will take advantage of them.