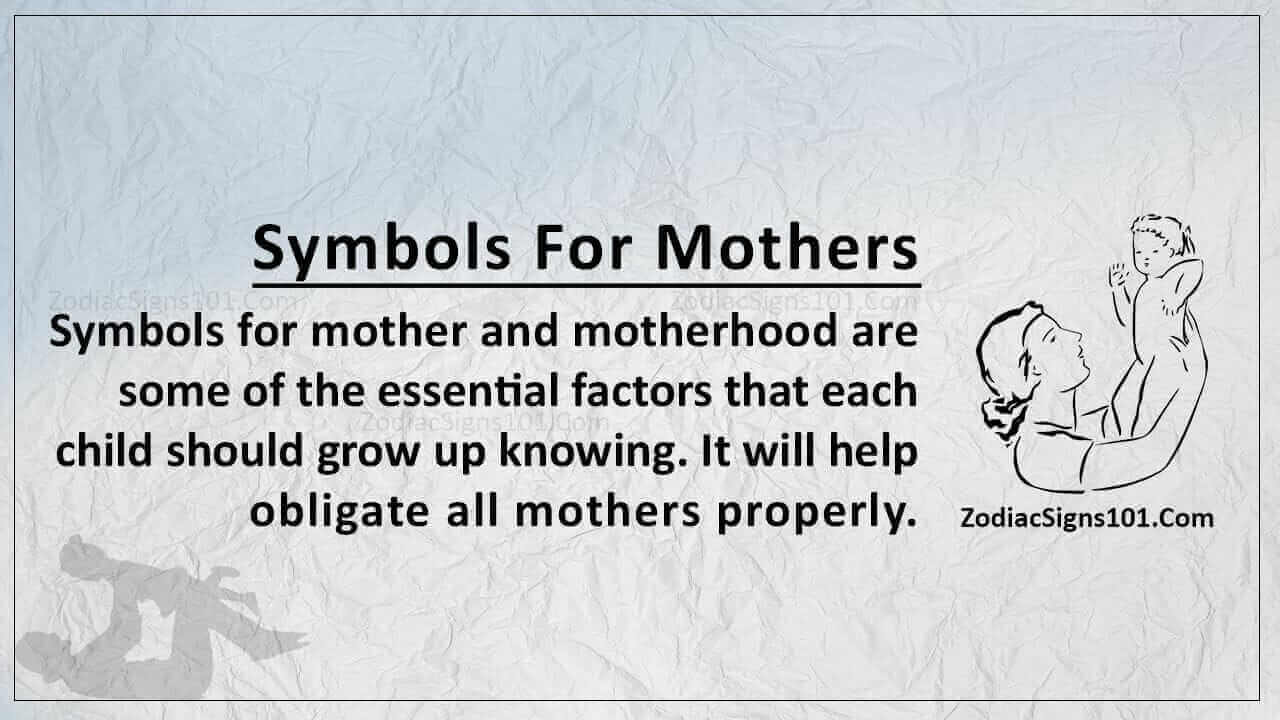 Symbols for Mothers: Some of the Special Influences of Maternal Love

As you’re tackling the meaning of symbols for mothers and motherhood symbols, you’ll realize that it doesn’t have a universal singular meaning. This is because there are several symbols from various cultures that represent motherhood. In most cases, I want to say the meaning of a mother is specific to a child or the family. However, some broad implications revolve around the significance of a mother that can sometimes be universal.

You should also remember that the symbols for mothers are everywhere, including the reference to mother Earth. This means that the Earth in its natural form has accepted everything on it as its children. Therefore, throughout the time, she has been nurturing and caring towards our needs. If you believe in such ideals, then you should take your time to appreciate mother Earth as you would your mother.

Symbols for Mothers: The various symbols that represent the meaning of motherhood

As we have discussed above, there are so many symbols that represent the meaning of motherhood. Here are some of them and their symbolic meanings.

Symbol of the Triskelion

Logo of the triple spiral that is also famously referred to as a triskelion symbol is one of the Celtic symbols that relate to the meaning of motherhood. It has a lot of powerful implications that revolves around the definition of spiritualism. in its form; the triskelion tries to show the significance of motherhood as a nurturing path. Therefore, it will require someone reliable to accept the virtue of womanhood and to become a mother. The triskelion also symbolizes the various stages that young lady takes to becoming a mother. These stages include becoming a maiden, mother, and a crone.

The Greek symbol of the goddess as a mother

There are many cultures in the world that uses the logo of motherhood to represent their goddesses. The best one comes from the mother goddess from the Greek culture that takes the form of a full moon. Like the Celtic representation of the mother symbols, the Greeks also have the same stages. However, they would depict them through the phases of the moon. Each of the steps would speak to the relationship that the mother goddess had with motherhood. Apart from that, it also defines that symbolic meaning of the cycle of life. Remember that cycle of experience include, birth, life itself, and then later death.

On the other hand, the Hindu culture has the meaning of mother symbols through the goddess Lakshmi. In this context, she is the mother goddess. In her form, she is such a beauty to behold. Also, she radiates with the highest level of benevolence. Most of the people visit and pray to her for aspects of good fortunes that she blesses them. Lakshmi also has the motherly representation through the symbolism of the Lotus flower.

The Hopi people also had symbols that represent motherhood, and they were quite scared. They mostly associated the meaning of mother to the Spirits of the Earth. Even the symbolism of a mother took root on some of the select locations like the summer solstice and the winter solstice. Moreover, the hope people also believe that the mother had a close association with the Crow. In many of the cases, the Crow will appear to the Hopi people with the big full of sprouts. This sign was symbolic in the sense that it will help them through their agricultural needs. People also believe that the mother what’s the symbol of an offering, being nurturing and loving to everyone.

The Hopi people use this symbol to signify the meaning of maternal energy. However, it was like a maze that represents the spiritual attachment of a fetus to its mother. Also, it will signify the various stages of life the oil people had to go through. The best part of it tends to remind the Hopi people that everyone begins the journey of experience from their mother. They are from as we are growing up the best person to get advice from is your mother. She is the one who will provide comfort and care to you throughout your life.

Symbols for Mothers: The symbolism of a Turtle as a mother

The best way to appreciate the mothers that we have is to honor them on Mother’s Day. This way, we can show them that we appreciate all the effort that they have put into our upbringing. However, we should not wait to celebrate our mothers, specifically on this day. Yes, they are the ones who brought us up we should show them that we care daily. Some so many people believe that Mother’s Day should be an international public holiday. Therefore, everybody should have an obligation to take care of their mother on that day. If your mother has passed on, you’ll be given that day off from work to remember her.

Symbols for mother and motherhood are some of the essential factors that each child should grow up knowing. Through this, they will learn to appreciate the kind of ladies their mothers are. Also, it will help obligate all mothers properly. I also believe that it will allow people to learn from different cultures the how’s of motherhood. Symbols of motherhood should also be taught to young people, especially the females. Doing this will show them the beauty and the responsibility that comes with being a mother. This way, it will also help to teach young people how to be responsible parents.