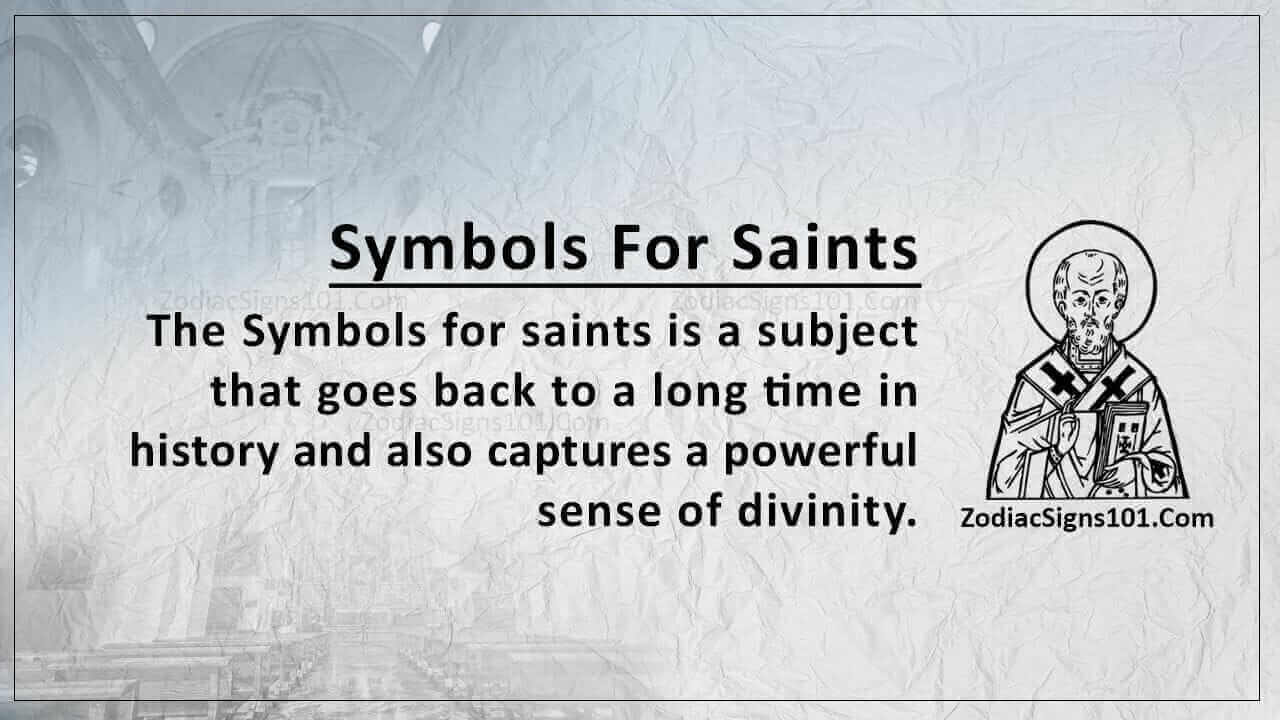 Symbols for Saints: Understanding their Path in Life

The Symbols for saints is a subject that goes back to a long time in history and also captures a powerful sense of divinity. However, who are the Saints? Or, who can be considered a saint? According to Christian teachings a saint is someone who has led an exemplary life of servitude and sacrifice to other people. Christian history has so many saints and people that have influenced the iconic lifestyle. The origin or the etymology of the word saint comes from the Greek verb hagios. The term hagios means to make holy.

Alternatively, it can also mean the process of sanctifying. This is the main reason why most people veiw the Saints as sacred. Moreover, their images also appear to be holy, and they even live through sanctified ideals. There is a common misconception that dictates that sainthood can only be awarded upon their death. However, this notion is not valid. According to the Christian rules, they would assign it to someone who was utterly faithful to their devotion to God.

Moreover, the church also has to recognize them as sanctified or sanctify them themselves. The church usually displays the pictures of the Saints in a specific way that is easy for other people to identify them. This is one way of artists to show that the person in question is a saint. Most of the artistic display of the Saints try to explain the life story on different canvases. One of the most renowned churches that use the symbolism of saints is the Catholic church.

Symbols for Saints: Some of the Famous Logos of Various Saints

Many symbols help us define the meaning of saints. Some Saints also have the symbols that are associated with them. Here is a sample of the emblems that represent specific Saints and their meaning

The Anchor sign is the symbol that most people believe that portrays Saint Nicholas. Also, the symbol of the anchor represents the meaning of protection of sailors by their patron saint Nicholas. There is a deep belief that any prayer of Saint Nicholas to God will bring blessings to sailors. You should also know that the patron saint of sailors was responsible for all ships and merchants at sea. There are other meanings of the anchor that you can look up to get a better view of its full purpose.

The arrow symbol of Saint Sebastian and Saint Ursula

This Insignia signifies the martyrdom or the source of heat that Sebastian witnessed in his life. You should also remember that Saint Sebastian died after being hit by an arrow by emperor Diocletian. During this period Sebastian took up the role of converting Romance to Catholicism. The emperor was opposed to the idea; therefore, he killed Sebastian after torturing him for days in the end.

This action itself sanctified Sebastian as the patron saint of Warriors, athletes, and soldiers. Remember also that saint Ursula was also one of the saints that her life got cut short by an arrow. In her time, she went to spread the word of god and Catholicism to the Huns. When the king of the Huns asked for the hand in marriage, she declined. Her actions and beliefs angered the King, who shot her with an arrow after which she died hence becoming a matter for her course. This, in turn, sanctified her as the patron saint of travelers, orphans and virgins.

Symbols for Saints: Symbol of an Axe of Saint Boniface and Josaphat

Once Upon a Time Boniface while spreading the word to the Norse people cut down one of their symbolic trees. Through his Faith, he was trying to stop the Norse people from worshipping an oak tree. The Oak tree was a dedication to the god Thor. When the tree fell, it took up the shape of the cross of Christ. This action that Boniface took sanctified him as the patron saint of youth and brewers.

On the other hand, Josaphat became The Saint Ukraine. The Ukrainians did not take lightly to him, defending his servants and friends from a mob. Out of anger, the Mob took Josaphat and Lynched him using an ax. At this point in life, the shaft became the symbol schism to help bridge the gap between the Roman Catholic church and the Orthodox one.

The symbol of a beehive of Saint Ambrose

When Ambrose was an infant, some bees swarm over his cradle. During this time, the bees made honey that dropped on his lips. When his father came and found babies doing this, you took this action as a sign. The father then said that it was the sign of Ambrose becoming a speaker of the word of god. This is why Saint Ambrose became the passion saint of candle making, bees, and beekeepers.

The symbol of a dragon of Saint Margaret

Margaret took up the role of defending people who got wrongly accused and tortured. At one point in life, the Matron Saint got tortured by Olybrius. The man had demanded Margaret to marry him also that she had to renounce her faith. Being the kind of Christian that she was Margaret declined to marry him. Some Legends the picked Margaret has been swallowed by a dragon. Despite being consumed by the Dragon, Margaret came out unharmed after being purged.

The Symbol of the Heart of Saint Augustine

The symbolism of the flaming heart has an association with St. Augustine. Moreover, many people thought of the heart of this saint to be that of fire and yearning for God’s word. This is because of the type of courage and enthusiasm that he displayed. Moreover, due to his need to learn more about the word of God, he became the Patron Saint of Theologians printmaking and students.

As we have seen above, there is a lot of symbolism that surrounds the meaning of a saint. Also, many signs capture various aspects of their life, and we can borrow a few lessons from them. Also, being a saint is a matter that requires self-sacrifice on behalf of yourself and other people. The sacrifice in question here should be selfless. By doing so, you will certify yourself that’s becoming one of the Chosen Saints of God.

Remember also that you have to show through your lifestyle, leading to the point of that sacrifice that you’re selfless. However, some other people got to be Saints from spontaneous actions that did not require much sacrifice. All of this try to teach you the symbolism of a saint is quite essential. Therefore you should learn them and also learn to pray to them. When one prays to a saint, they get the Divine guidance from God himself.