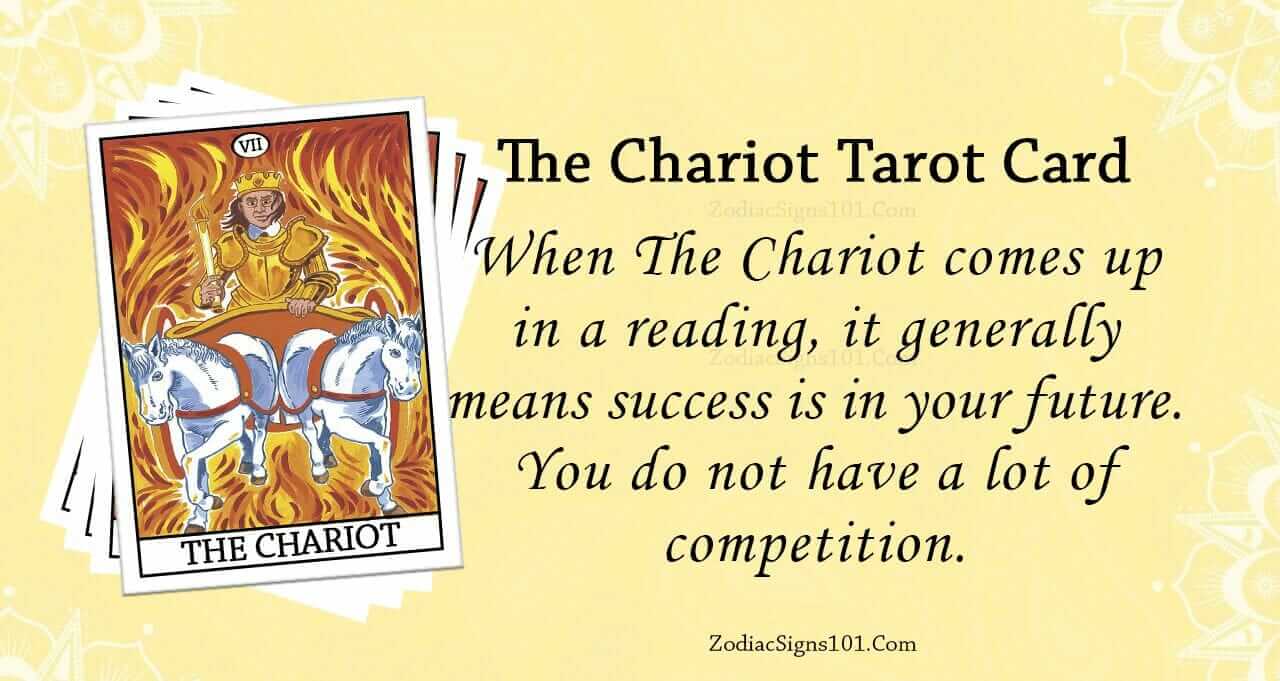 The Chariot Tarot card is the seventh numbered card of the 22 Major Arcana. In earlier decks, the driver depicted on The Chariot was female but newer decks usually show the driver as androgynous. Most of the illustrations for The Chariot tarot card show the chariot leaving a city behind it while and going into the night. On some decks, The Chariot flies into the heavens.

There is also a symbolic meaning to the creatures that pull the chariot. The creatures change from deck to deck, but what stays the same is that one is female and the other is male. This is important because it emphasizes the needed balance between males and females in the world. The world can learn best when the two sexes work off each other and together. When men and women work together, they can do anything. 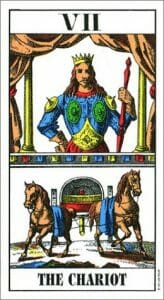 When shown upright, The Chariot means that you are making progress on or with whatever you are trying to achieve. This card can also mean that you are close to success. You will be rewarded nicely for all of the work and effort you have been putting forth.

However, it means something completely different when upside down, or reversed. When The Chariot is reversed, it means you or someone you have been working with is being narcissistic and pushing others down to get on top. It can also mean your ego is getting in your way and hurting others. A similar meaning is that you are not paying enough attention to the feelings and needs of the people around you.

When The Chariot comes up in a reading, it generally means success is in your future. You do not have a lot of competition. If you do, they do not amount to much. Therefore, you do not need to worry about them.

However, it is also a reminder that you should be coming about this win honestly and without cheating or gloating. It is okay to be proud of your victory, but it will come to a fast close if you flaunt it around someone’s head.

This card tells you that you have been doing something right by working evenly with people. This is the reason why you have the drive you need to get your task done. Do not take all the glory for what has been done when you have been working with a team. 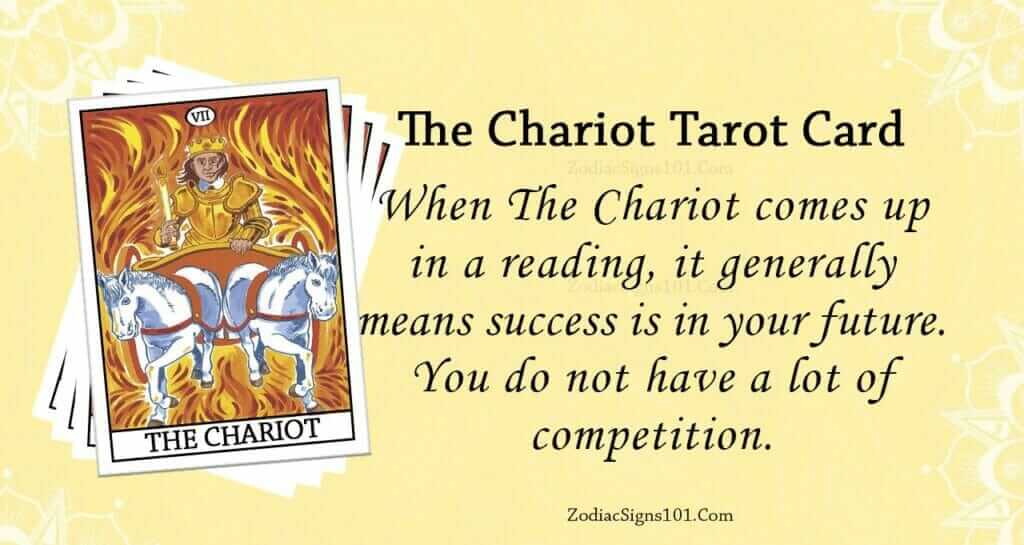 A love reading is one of the few places where The Chariot can be a confusing card. This card usually appears when you about to win something. You can not really “win” a relationship. So it usually serves as another reminder.

If you have just gotten out of a relationship, The Chariot tells you that you do not need the other person to be happy. You may have been happy with them, but you were also happy before them. Show you are still strong like the driver of The Chariot and leave the person behind you like the driver is leaving behind their city.

If you are doing a read for or about a lover, then it can tell you that your partner is going to be succeeding in something quite soon. However, if you do a reading about how your partner or a crush feels about you, The Chariot could change the way you feel about them. This card does not appear to tell you that someone thinks of others. They only think of their winnings and how they are going to be getting the next one. So, if you get this card, you should be careful so you do not get hurt in their conquest.

When doing a reading about your job, The Chariot is essentially a green light. If you have been thinking about getting a different job, taking that relocation, going for the promotion, or taking a vacation, do it. You have been working hard for a long time. This your time for a break or to get a better job so that you can increase the benefits you get for doing all the work. There is nothing wrong with going after something better.

The Chariot Tarot card reveals itself to people who have the drive they need to achieve what they want in life. If you see this card, then this is the perfect time to take a leap of faith. The cards are on your side.

The Chariot Tarot card is not really a good thing or a bad thing when you are doing a health reading. On one hand, it means that you are going to get sick or that you are still going to be sick for a little while longer if you are already ill. That is the bad side of this card.

When The Chariot comes to you in a reading about your family and or friends, it means that you have been doing well with the situation so far. However, you need to keep powering through. You might be upset and ready to explode right now, but you need to stay as calm as possible because things are going to be coming to an end soon and you can make it.

There is someone out there that is willing and able to help you. This way, you can rant and vent to them as much as you need to. However, you need to be careful around the people you are worried about upsetting. This is a saying ‘better safe than sorry’. If you are able to explain whatever is going on to the people in question, then only say as much as you can safely.

The Chariot Tarot card is usually a good one to see because of its tellings of victory. Though things have been hard, and they may continue to be for a little while, you should know that you have what it takes to get through it. You will be rewarded once you do. This card assures you that you are strong. You are able to do what it takes to get through to the very end. It can also mean that your hard work is done. You have won and you are going to be reaping in your pay or reward.