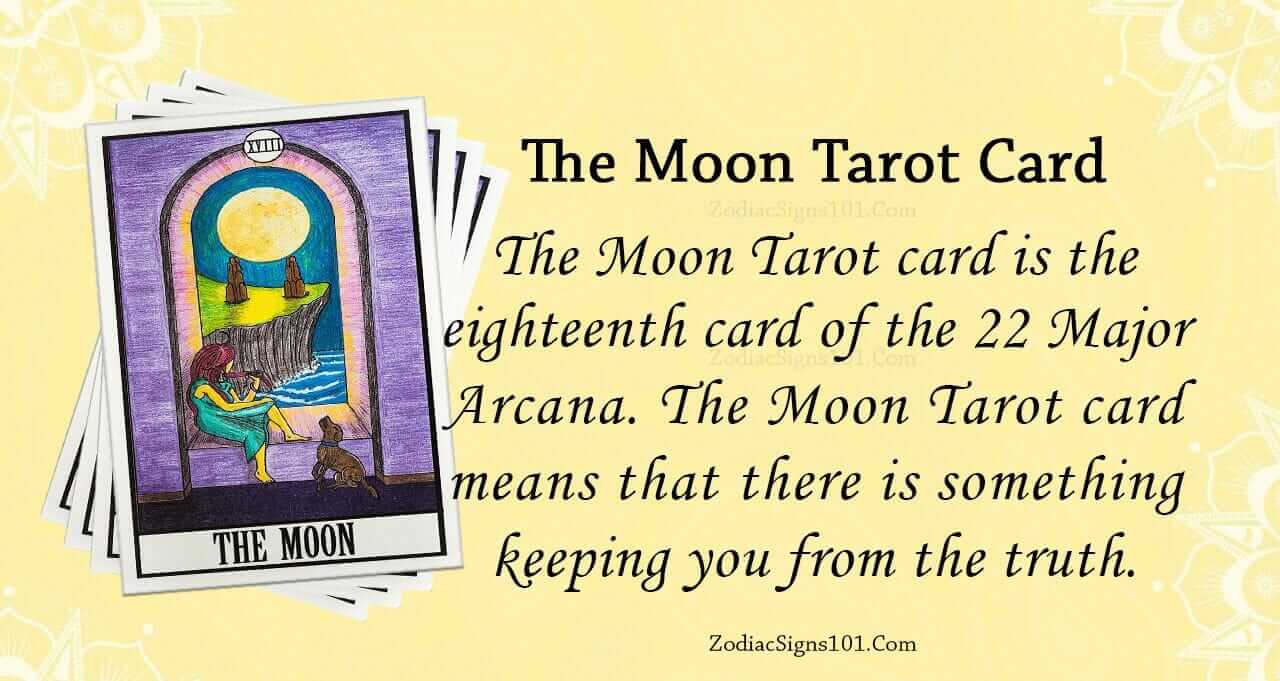 The Moon Tarot card is the eighteenth card of the 22 Major Arcana. This card is filled with symbolism so it is an important one. Like The Star, it means that the healing is completely but still brings a different meaning. In the light of self-growth, you have missed some details and now there is a wall of sorts. You misunderstood something and now comes the trouble of admitting that you have made a mistake. Sometimes, admitting that you are wrong is one of the hardest things to do. However, you need to step around your pride and your ego. 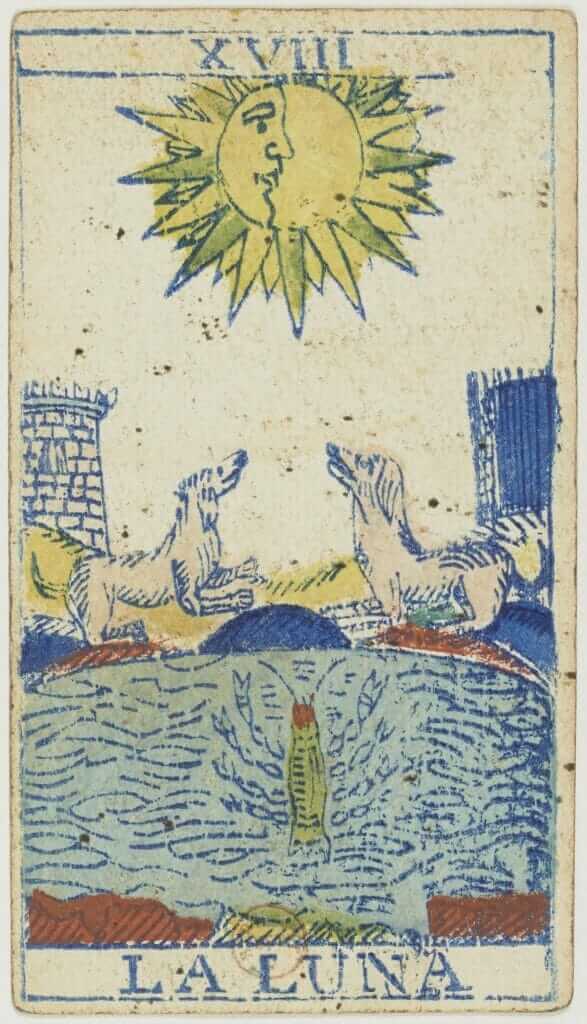 The two dogs on either side of the path deep have symbolic value. They are the barrier between you and your inner self. The Moon herself a symbol that shows you the power you hold inside you. It is trying to shine! At the bottom of the picture is a sea creature. It varies in some decks. In some decks, it is a lobster or a crayfish. Either way, it represents another female element. This one comes from the subconscious though it is rather ignorant. The last thing to consider are the towers in the back. The towers connect to the path that the dogs are on either side of. These two towers are another barrier, but only for people who are at the end of their journey but are pulling back from a complete understanding. 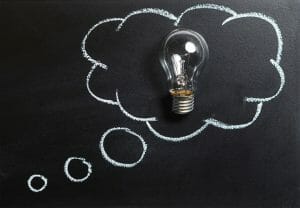 Seeing The Moon is upside down or reversed, means you have fears of what is ahead. However, you may not exactly know what that is. You lost some of the nerve that you to where you are. Relocate that nerve so you can continue down the path and so that you can lose your fear. You will not be scared of the unknown if you have the bravery to learn. 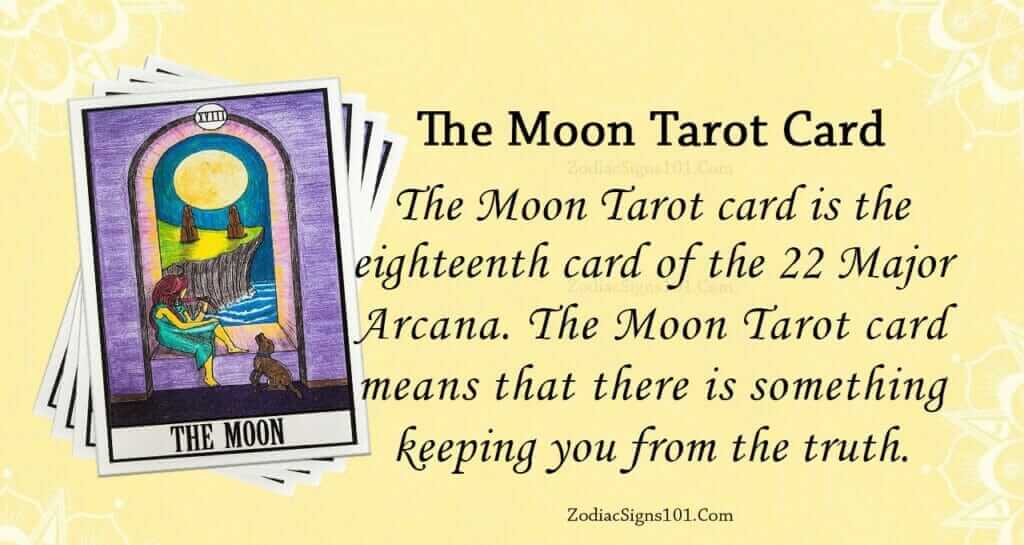 Basically, The Moon Tarot card means something does not make sense or got mixed up because of a misunderstanding. That does not mean you did anything wrong. It simply means that you need to start looking at things with a little more imagination. You can not understand sarcasm or a metaphor without opening your mind and being creative.

If you feel that you did not understand something, then perhaps you are hiding something from yourself. That might sound foolish, but it does happen. You learned something about yourself but you are not pleased with it. Otherwise, you know that the people around you are not pleased with it so you are trying to hide it. This card suggests that you accept and embrace what you learned so you can move on with your journey.

The creature coming from the water can mean that there is something ignorant in the subconscious. Some claim that The Moon is telling of love between a person and a pet. There is a debate on whether or not animals can feel love and anyone who has had a pet know that animals can. If you have gone through a breakup recently, consider adopting a pet.

This card can mean you are hiding something from yourself. In a love reading, that comes when you know there is something wrong about your partner and you will not look at it because you are scared the relationship will come to an end. Relationships need honesty and communication to work. Therefore, if your partner can not be completely open with you, then it might be for the best that it does come to an end peacefully before it blows up.

When you are doing a career reading and you see this card, be careful. Remember how The Moon can mean that things are not as they seem sometimes? This is one of those times. In a career reading, The Moon is telling you to watch your back and to stick to yourself more for a little while. This is because even though the people you work with can be nice, they are trying to throw you under the bus and gain a step up so they can advance. This might not always be the case, but that is what this card in this area.

In the chance of this card appearing as a result of a reading on whether or not things at work are going to go well, you need to focus on the cards around it. This just means that the future is unknown. There are no promises on success or failure. Take what help you can from the other cards in the spread.

The Moon, as an astrological being, is related to cycles. She herself has phases and changes she goes through, as well as having an effect on the oceanianic tides. That being, if you have been having mood swings- it does not matter if you are female or male- The Moon is why. Your hormones are a little out of whack or they are shifting.

The Moon can also have effects on how you are doing mentally and emotionally while also affecting your connection to the spiritual world. Also, keep in mind that you can not know everything about your health. If you have been to a doctor recently, they may have made a mistake. Try getting an appointment with a different doctor for a second opinion if you are not feeling better after having seen the first doctor.

Either someone, or a couple of people around you, are trying to hide something from you. This does not mean it is something bad. They simply are not telling you everything. It might be a surprise or it might be something big. They are your family and friends so you know they are not trying to hurt you. If anything, they do not want to hurt you or they forgot to tell you.

Maybe a friend made a choice and it did not have the outcome they thought it would so they did not tell you because they knew it was wrong and they do not want to lose the friendship they have with you. If you have an idea of who might be causing the worry, then you can confront them. However, if you are unsure, then you might just have to wait it out for when they are ready to tell you and get it off their chest.

The Moon Tarot card means that there is something keeping you from the truth. Something is odd and out of place. Try to figure out what it is so you can keep going and complete your journey. You are scared of the unknown. Be more creative when it comes to problem-solving. There also could have been a misunderstanding, on your part, that you still need to sort out but that you are hesitant to address. Find out what it is that you hiding from yourself so you can move on to the next stretch of your journey.