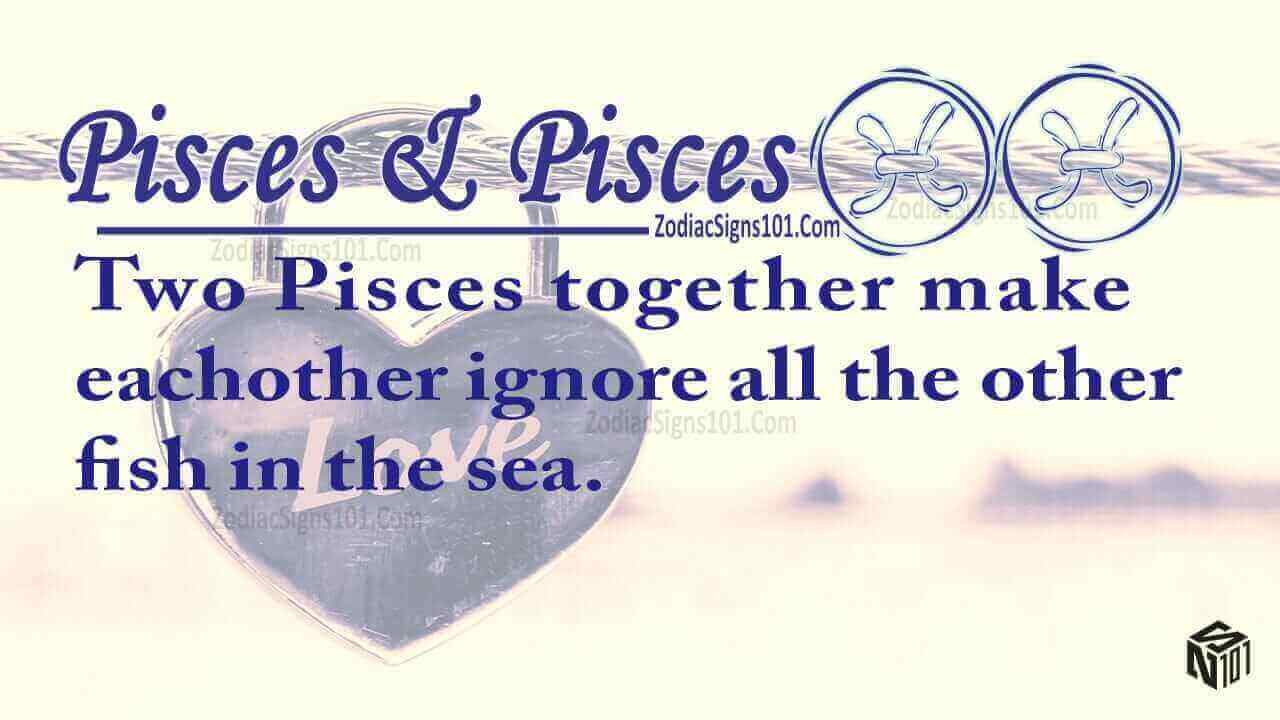 Two people of the same sign can have a happy or tumultuous relationship. This article will take a look at the ins and outs of Pisces Pisces love compatibility to see how well they fare in a relationship together.

Pisces (February 20 – March 20) is full of emotion and love with a personal goal to make people happy.  They live in their dreams and ideas so they may forget about the project they’re working on.  Sometimes their ideas become too elaborate and complex when all they need is a few simple steps.  Even though they keep to themselves, they enjoy watching people in social settings and learning how they interact with others.  They’re also very intuitive and have a good sense about what people need or how they’re feeling.  They strive to help them meet their needs, whether it’s a stranger who needs to find their way or a friend who could use a hug.  Even if they know they’ve made someone’s day, they need some encouragement, so they know they’re on the right track.

Friends can give them the approval they seek, but they can also keep them grounded and help them become more independent.  Mostly Pisces relies so much on others that they may forget to do for themselves.

This sign is also very romantic.  They do whatever they can to please their partner.  They don’t hide their emotions, and they’ll show as well as tell how much their partner means to them.  One thing they like to do is demonstrate their love with romantic gestures or little gifts to make their partner smile.  They’re also tactile lovers who have no problems with a bit of public display of affection like hugging, kissing, and holding hands.

When two Pisces fall in love, they find a connection with someone who completely understands where they’re coming from.  Not only do they know how they feel, but they also learn about them through their intuition.  They’ll still have their differences, but their personalities will be the same as they strive to please each other.  They’re lovely at taking care of each other in one of the most romantic of relationships.

There’s no doubt when Pisces loves another Pisces.  They’re full of big dreams and lots of love, like a happily ever after story.  They’re also connected so wholly that it seems like they were meant for each other from the beginning.  There’s little time for sadness because they’re always making sure that their partner has everything they could need.  These two also have respect for each other.  They have no problem if one of them has aspirations for a career, and the other one wants to stay home with the children.  The same is true if the one who stays home is the Pisces male.  Love and not gender roles dominate Their connection. Their free time will likely be at home where they can be in tune with each other with little outside distraction.

Pisces is a tactile lover.  They show their emotions through their touch.  It can be a reassuring hand on their shoulder or a lover’s caress under the table.  They’re all about cuddling and touching and aren’t shy about it.  This is true in the bedroom.  They use their senses to touch their partner in a way that makes the physical experience very emotional.  This is because they know they can open up entirely to their Pisces partner.  Even if they aren’t making love, they’re still connected when they spend hours cuddling, talking, and forever touching.  Their focus on each other will be mesmerizing.

One of the areas of weakness for Pisces is the ability to be more grounded and realistic.  They’re full of dreams and love imagining their life in a fantasy, but sometimes they need a friend or partner who’ll bring them back to the real world.  For example, if they’re interested in dating a Pisces, they’ll want to see if they like them in return.  Rather than strike up a conversation, they’ll take the indirect approach and send anonymous notes or flowers from a “secret admirer”.

Even after they get the other person’s attention, they won’t act on it because they’re afraid of getting hurt.  This is where their raw emotions come into play.

Pisces May Need a Nudge

They may miss out on an opportunity unless they get a nudge.  Sometimes that nudge comes from a friend who reassures them.  Another Pisces might advise them to continue the indirect approach until they completely miss the opportunity.  Even if two Pisces come together in a relationship, they don’t always make the best decisions for each other.  They may be intuitive, but they won’t make the most rational choices.

When they’re in a relationship with Pisces, it’s more like they’re floating through their emotions rather than acting on them.  No one can help them deal with reality when all they want to do is live in their dreams.  They also don’t know how to handle hardship, as well.  Both of them may blame each other for something that goes wrong, and there’ll be no resolution.  They’re also likely to hold in their blame and anger because they don’t want to confront their partner directly.  Before long, they’ll explode in a way that their partner couldn’t predict because they had no clue that there was a problem.  It’ll also be a challenge for them to break up because they cannot imagine making that large of a decision that comes with a massive impact on both of their lives.

A Need to Communicate

Communication for these two has to be about the positive as well as the negative.  They need to be open about all parts of their relationship so that they don’t have to deal with blame, hatred, or emotional meltdowns.  When they can be a little more assertive, they’ll find that they’re making themselves happy which they can easily forget to do.

When it comes to compatibility, these two signs have a magical, emotional connection that’s unlike any that they may be able to achieve with another sign.  They’re ideal because they understand each other better and know that they’ll be ready to please each other physically, mentally, and emotionally.  Their compatibility is evident in their domestic decisions and their lovemaking.  However, they can also be very compatible when they choose the indirect approach on topics that they don’t want to confront their partner about.  Rather than start the conversation, they avoid it until they come to a breaking point.  Pisces isn’t always direct and needs to find a way to be more assertive in the relationship if they want their voice heard.  They need to show that they can be less dependent on their partner and more independent.  This’ll allow them to appreciate themselves and love their partner more.