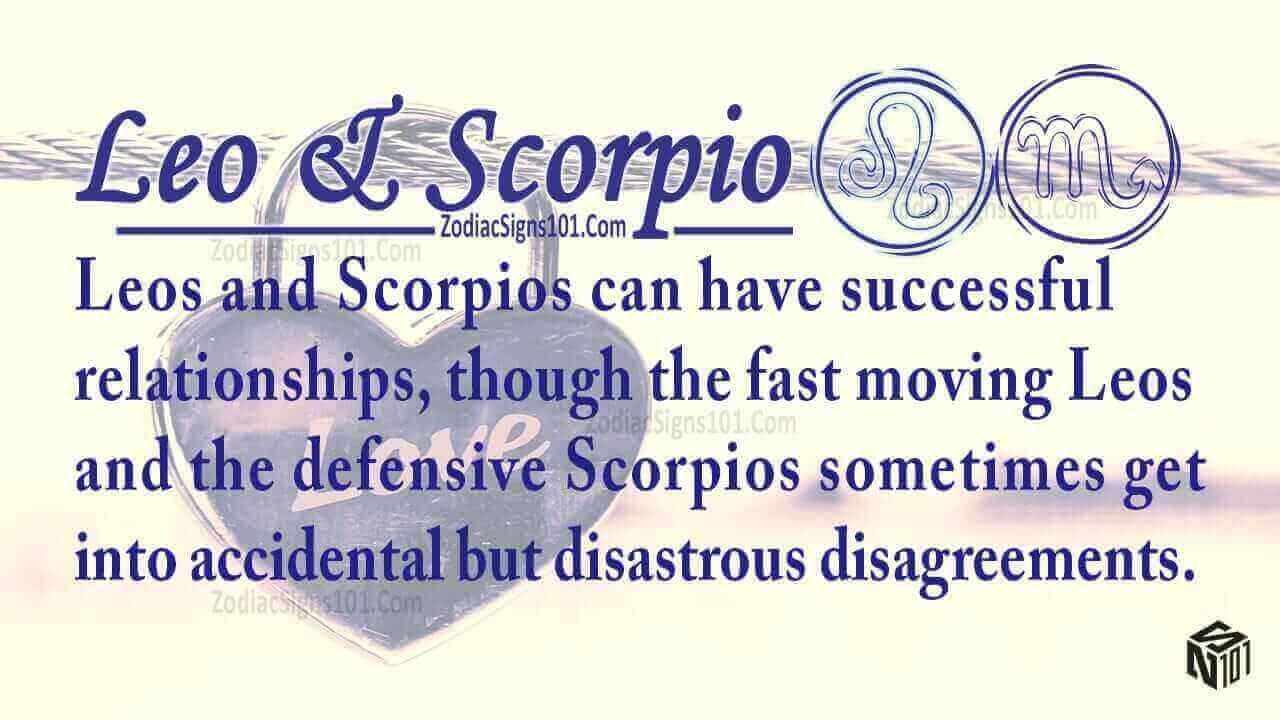 A Leo Scorpio couple will have a lot in common with one another, and a lot of things that make them different. But what does this mean for Leo Scorpio love compatibility?

Leo (July 23 – August 21) has a plan to be the best in their career, love life, and social life.  They’re ready and willing to put in the hard work toward their goals.  While these ambitions may seem high in expectations, this sign has the energy and determination to make it happen.  They love what they do and the excitement it brings to their life.  The result, as well as the motivation from their peers and loved ones, keeps the momentum going.  It doesn’t hurt that they’re competitive.  They love to flirt and be around other people, especially those who can push them and help them reach their goals.  Of course, they’ll create new targets in its place once they’ve reached their original ones.  They’re independent and strive to maintain control in all they do.

Scorpio (October 23 – November 22) is also an independent and motivated sign.  They’re self-motivated to be the best and don’t want to rely on others if they don’t have to.  If they have to work with others on a project, so be it, but they want to be the team leader and call the shots.  They give a lot of attention to the details and are resourceful in their own right.  It’s crucial for them to achieve their goals on their own.  Their personality is shyer, but they show respect to their friends and help them as they can.  However, they rarely reach out to their friends to help them in their most difficult situations.

This couple has a lot of common personality traits, but also several differences. As with any relationship, they’ll find that they have the common interests and personalities that will attract them.  At the same time, they have differences that can balance each other out.

Leo is always ready for compliments and attention.  A partner like Scorpio is happy to give it, especially when they know that it’s part of their happiness in the relationship.  As a hard-working sign, they know how important it is to stay motivated on their path to success.  Both of them are attracted to confident people who have a strong work ethic and ambition. They’re unlikely to fall for someone lazy or who takes advantage of the efforts they put in.

Scorpio, in particular, wants to make sure that the work they do is done well.  Their eye for detail means that they have pride in the little things that make their quality shine.  They love to make their partner shine as well. To do so, they’ll look out for hints so that they don’t have to ask what their lover is thinking about or wants.  This skill can go a long way when they bring on a little more romance in their love lives.

Leo will also enjoy the pursuit of getting to know Scorpio.  A little bit of mystery is how they get the attention they want.  While Leo is more outgoing in their flirting, Scorpio feeds their curiosity little by little to keep them interested.  The anticipation will be rewarded in their conversation as well as in the bedroom.  They bring a level of excitement that can be mind-blowing.  Their energy and creativity will satisfy both partners, as Leo takes control and their partner gives in ultimately.

The dating life of these two signs will be full of interests and intrigue.  They’ll enjoy the discovery of the newness in their relationship.  Despite being personality equals in several areas, they’ll find that areas of control that neither of them wants to share.

Scorpio’s the one who wants to be in charge of the relationship.  They don’t take commitment lightly, and they want their serious relationship to go in the right direction.  Leo wants to be the one who makes the decisions in every aspect of their lives, including the relationship.  They’ll come up with some of the creative, adventurous dates to ensure it meets all of their needs.  Also, they may want to be in control of household spending.  There may also be a disagreement as to how often Leo goes out with their friends compared to the time they spend together as a couple.  Scorpio would instead manage the details and won’t always agree with their partner.

Arguments can get ugly.  Rather than communicate rationally, they’ll fight for power.  In the effort to maintain control, Scorpio will try hard to hold their lover closer. It’s a possessive attempt to keep them at home instead of going out with friends or clients.  The independent side of Leo will have nothing to do with that.  Even their natural, flirtatious charm can get in the way if there’s any insecurity about their love and commitment.  Their arguments may be short and explosive, but they may happen frequently enough to make them lose sight of the qualities that brought them together.  They need to find a way to compromise without heated emotions or hurt feelings.

When it comes to compatibility, these two signs are passionate but complicated.  Their dating life will be the highlight of their time together.  The attraction they have is due to the shared qualities that they take pride in such as ambition.  Their chemistry is undeniable.  If they’re looking for a casual relationship, they’ll undoubtedly be satisfied.

If they work together on projects and use their strengths to the goal’s advantage, they’ll be satisfied with the outcome.  However, if they’re looking to take the next step to a long–term relationship, they need to realize that two headstrong personalities will need to learn to agree and compromise when their two ideas conflict.  It won’t be easy to admit being wrong or to admit that their plan isn’t the best one. But, doing so will save them a lot of headaches and heartaches.  A successful relationship for this pair will require a lot of love and a lot of effort.