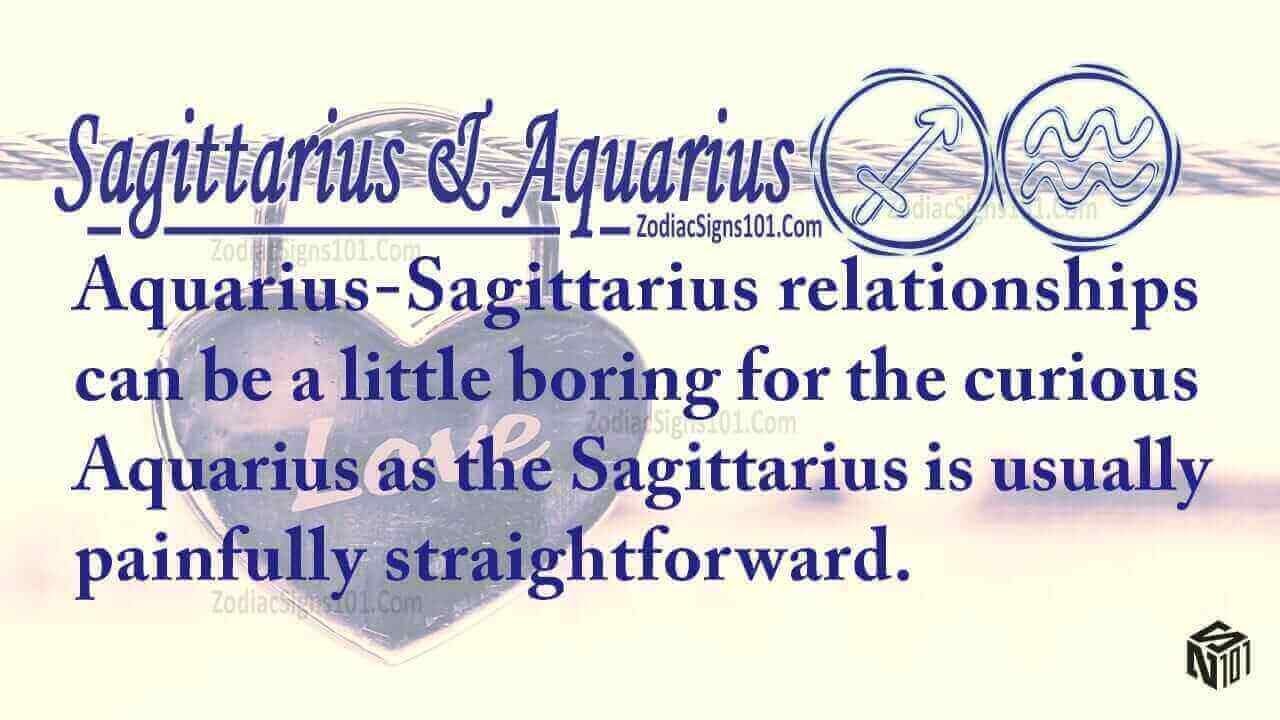 Will Sagittarius Aquarius love compatibility mean a happy ending for couples from these two signs, or will their challenges be too much to overcome?

Sagittarius (November 23 – December 22) loves to be spontaneous and adventurous.  Nothing excites them more than meeting someone and following them on an unexpected trip.  Sometimes their best learning experiences come from the people they get to know.  That doesn’t mean that they don’t try things for themselves.  Some of their conversations deal with their adventures and expeditions that some people wouldn’t consider for themselves.

Sagittarius isn’t crazy, but they are creative.  They can come up with some unique ideas, and with the right connections, they can bring these ideas to life.  They need to be entertained, but they don’t bring drama into friendships or relationships.  They may come off as lazy, but often that’s because they don’t want to do things.  They’re good friends and lovers who’re willing to try anything and keep it playful.  This independent sign intends to find a love that stimulates their mind but doesn’t stifle their urges for adventure.

Aquarius (January 21 – February 19) is the kind of person who looks at the whole picture and finds things that most people can’t see.  They have a creative and artistic eye as well as the intellectual ability to communicate their thoughts and feelings.  They don’t have to be artistic to express their creativity as they use many outlets to express themselves.  Some may find their approach to be unconventional, so, understandably, they were not the best students in a traditional school environment.  They show their intellect in other ways because they do much of their learning through their life experiences.  Whether they discover the things they love in life through music, art, crafts, or the immersion in other languages and cultures, they learned what they’re most passionate about.

Mundane tasks don’t offer enough of an outlet for their energy.  Some may find that they’re emotionally detached.  This could be that they have many ideas but aren’t sure how to connect them to their emotions.  Sometimes they may come across as stubborn or rebellious, but either way, it shows that they do what works best for them.  Aquarius in love needs someone to hold their interest long enough and can keep up with their non-traditional life choices.

A Sagittarius Aquarius love affair will be powerful and exciting, but that’s good for these two. They’re always looking for fun, intellectual stimulation, and something they cannot find from other signs.  They won’t just support each other in their needs and wants, but also encourage them.  However, they need to be able to balance their needs and wants so that they can function as a couple rather than two individuals.

These two signs have the fuel it takes to create a spark and light up something beautiful.  Their connection is intellectual as well as physical.  They’re able to come up with ideas and inspiration for their next adventure and experience, and there’s always plenty of both to go around.  It wouldn’t be a surprise if they kept their passports close for whenever they have the urge to travel.

Both of them are social signs, so they’re comfortable getting to know people and making friends.  They’re also both comfortable in themselves and their partner. As a result, they don’t get jealous or clingy when their partner has fun with someone else. Instead, they’re probably eager to find out more of what was so impressive that got them so animated.  They both want to learn more all of the time, but they’re fascinated by learning through a hands-on approach rather than learning about it in a book or lecture.

Their sexual compatibility has no boundaries.  If they feel it or dream it, they want to experience it together.  Both of them are willing to take risks and try new things, even if it doesn’t go as planned.  Perhaps, if they’re lucky, it will be better.

While there’s little that’s negative about a Sagittarius Aquarius match, they do have to deal with specific challenges to make their relationship work in the long term.  Sagittarius is a loyal sign and has no problem being with someone, but they do tend to focus on themselves more.  This is evident in their trips and experiences that are more for their personal growth than the growth of others.  Aquarius is more in their head.  They love to come up with ideas and plans, but they may not always consider following through with them on their own.

As crucial as loyalty is to Sagittarius, it isn’t of great concern to Aquarius.  They look to make friends and expand their experiences.  They may be in a relationship with their partner, but they don’t see a problem with having other partners too.  This can be heartbreaking, but it doesn’t have to be.  Neither is keen on commitments because they worry about it, affecting their independence and desire to experience life the way they want.  If they put each other first, their relationship can still be healthy without making the other change their personality.  They can still be spontaneous and exciting as long as they communicate before assuming it’s ok with the other.  When Sagittarius thinks about more than themselves and Aquarius includes their partner, they can learn from each other and still maintain the strong bond they have.

When it comes to compatibility, these two signs are exciting and adventurous together.  Their relationship is full of intellectual conversation, engaging experiences, and the potential for an explosive sex life.  While everything looks good in writing, it’s the way they see themselves that can make their connection refuse to bond.  With Sagittarius focusing more on themselves and Aquarius focusing more on the big picture, their worlds can be parallel and never quite come together.  They don’t have to change who they are to make things work but open their vision on the world.  Then they’ll be able to see themselves with their partner for the long term.