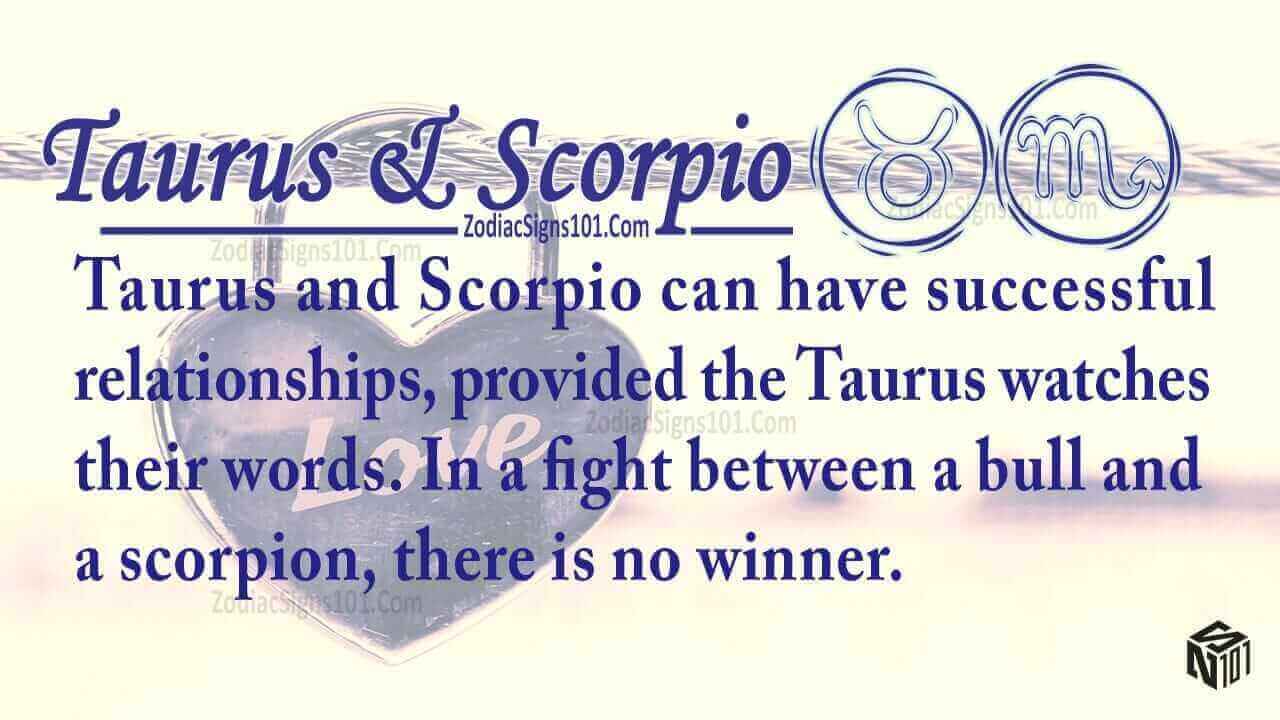 Will a Taurus/Scorpio relationship be a success? Will they be able to connect on all levels or will they struggle to find any common ground?

Steady and friendly, the zodiac symbol of the bull, Taurus (April 21 – May 21) is a great companion.  They’re fun to be with, willing to try new things or take part in an adventure, and they’re good listeners. Not likely to shy away from helping others, they have a sense of calm that is reassuring.  They have leadership qualities and can work well with others when their stubbornness doesn’t hinder the forward motion of a project.  Sometimes they work best with a group to stay motivated to the end.  Ruled by the planet Venus, they’re also romantic and attracted to beauty.

Scorpio (October 24 – November 22) is the zodiac sign of the scorpion and is driven to succeed.  Their independence combined with a shy personality makes them resourceful, creative, and attentive to fine details.  Ruled by the planet Pluto, they want to be able to call the shots and are willing to work up the ranks in business to get to that point.  They also have a say in how their friendships and relationships work.  For example, Scorpio likes to do things with others, but it depends on their moods.  They may come across as bossy, which may conflict with some other signs.  Also ruled by the planet Mars, they understand passion.

A Taurus/Scorpio relationship won’t automatically be a balanced one.  Their ruling planets of Venus and Mars can bring love and passion to the relationship, but Pluto’s drive for power and Taurus’s stubbornness can have a negative reaction.  It can be the most amazing relationship that connects two people, or it can be full of challenges and frustration. If they can find harmony in their relationship, it’ll make it worth their while.

Positive Attributes in a Taurus/Scorpio Relationship

Communication is essential in all relationships, and this comes more easily with Taurus and Scorpio than with some others.  They’re both good listeners and consider what the other has to say.  Scorpio, in particular, is perceptive to their lover’s feelings and moods. They also heed what the other says knowing that it’s not supposed to be mean or spiteful but that they’re trying to work to a compromise.  Changing a person to someone they aren’t isn’t a priority to them.

One of the ways that Taurus shows their affection is with generosity.  Gift giving makes them happy when they know that they have brought a thoughtful token of joy to their loved ones.  Another way they like to express themselves is with touch – whether through shoulder rubs or kisses.

Taurus is committed to their partner in a relationship.  They’re loyal and show how much they care about the ones they’re with.  Ultimately, their goal with their friends is to ensure that they’re happy and do what they can to make sure it happens.  They’re patient and kind in this regard.  Scorpio may be shy at first, but when they make friends, they’re very protective of them. Taurus appreciates this because they also want stability and security in their lives.

The sexual chemistry between Taurus and Scorpio is tangible as they love to give in the bedroom.  They demonstrate their creativity as well as their feelings with role-playing and non-traditional positions.  Nothing is off-limits so long as it increases pleasure and ecstasy.  They focus more on their partner’s satisfaction than their own.  This attention to their partner is important to them both sexually and emotionally.

Negative Attributes in a Taurus/Scorpio Relationship

Even though Scorpio is attentive to their lover’s moods and emotions, they’re very sensitive and moody.  A statement in jest can turn into an argument if they misinterpret its meaning or intention.  When they get into a fighting mood, Taurus will get upset and feel like they cannot be as candid with them.  Taurus, however, can also start arguments on their own.  They tend to be stubborn, especially when they feel like they are right and have to defend their opinions or ideas.  Someone will have to win one of these arguments, and it will not finish up well.  Scorpio may resort to tactics such as ignoring their partner until they get an apology, even if Taurus was not wrong in the first place.

Scorpio keeps their friends, and loved ones close, but they can also become jealous.  This can occur when Taurus wants to spend time with friends for lunch and does not want Scorpio along or if they are getting more attention from a flirt whether or not it is harmless.  What starts as a cute show of loyalty and commitment can easily turn into something frustrating and trying.  They want no one or nothing getting between them and may overreact if they feel insecure.  If Taurus tries to rationalize the situation as something that isn’t threatening to their love, it’ll lead to another argument and a war of wills.  Even if they’re soul mates, the constant tension and arguing can and will drive them apart.

When it comes to compatibility, these two signs have many similarities that attract them to each other and give them so many ways to bond as a couple.  They can both provide stability and security in their homes, openly give tokens of affection, and discuss so much in depth.  Their commitment to each other can make them a compatible couple.  However, certain aspects of their personalities can divide the couple.  It’s their stubbornness and emotional insecurities that can challenge the love they have and question their compatibility.  Along with having good communication, they need to compromise and strive to understand each other.  They also need to reflect on what triggers their disagreements and if it’s worth the risk of losing their friend and partner.  A Taurus/Scorpio relationship can go either way, and it all depends on the efforts they put toward a positive, understanding bond.