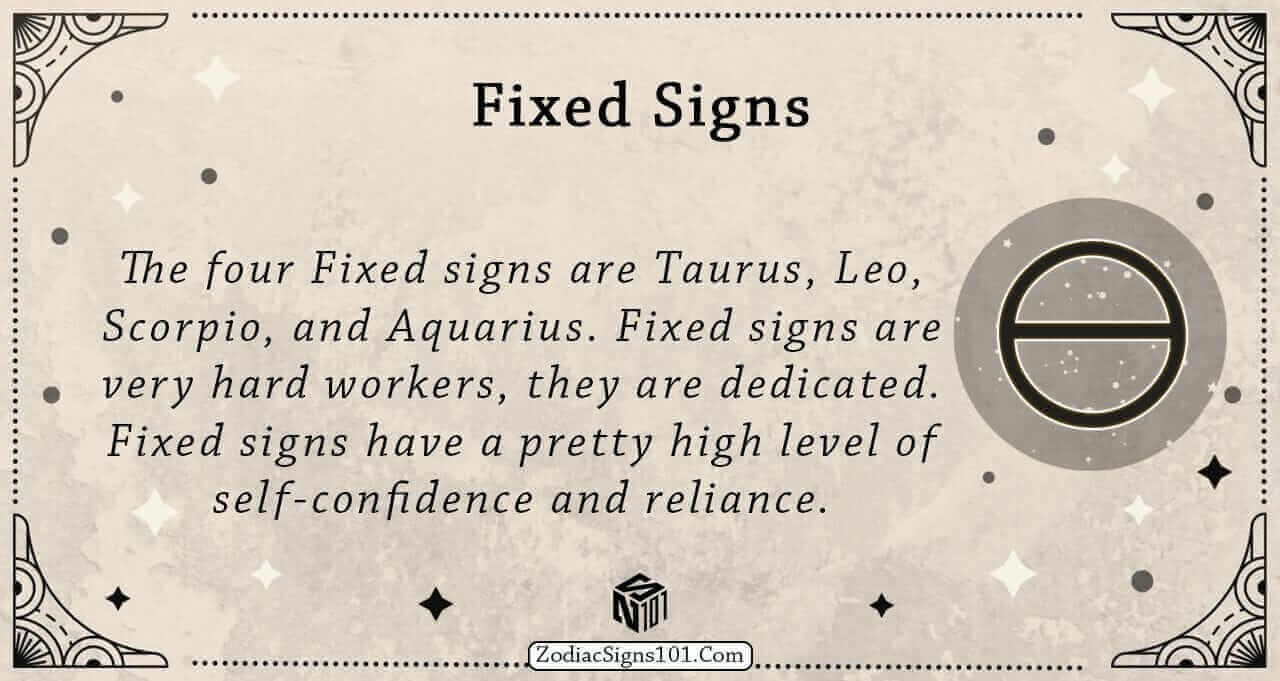 In astrology, there are multiple little groups or classes that everyone fits under in one way or another. There are the moon and sun signs, planets, houses, some people have cusp signs, and the elements. This article is going to focus on one of the three qualities: fixed signs.

The other two Qualities are Cardinal and Mutable. Since there are twelve zodiac signs and only three qualities, each quality has four signs under them. What is important about the qualities of the zodiac signs? They show where the person gets their motivation from, how motivation they have, and why they do things the way they do.

What are Fixed Signs?

The four Fixed signs are Taurus, Leo, Scorpio, and Aquarius.

What Sets the Fixed Signs Apart from the Others?

Fixed signs are almost more steady than the signs that are born under the earth element. Fixed signs are usually calm workers that even enjoy the work and work until the project or assignment is complete. It might sound crazy to others that Fixed signs like working, but to them it is essential. It what they pride themselves on and it gives them a sense of purpose and being. Since Fixed signs do all of this work and they like it, it has also given them an amazing resolute, stability, and determination that some of the other signs lack, envy, or despise.

Fixed signs have a pretty high level of self-confidence and reliance. Sometimes their self-reliance can get in the way and make them a tad cynical and stubborn if they do not want to work with someone or if they do not trust the person. Being stubborn does not bother Fixed signs. If anything it builds them up because it adds onto their determination whether the stubborn bout is to prove someone wrong or to just get something done they themselves do not care for.

Because of the determination that these people have, they can use that determination to go deeper than they have to in whatever it is they are trying to achieve and they usually do. This gives them an acquired knowledge and wisdom.

Fixed signs are not the best at getting things rolling, but rather they will find something that it is already going on and sink their teeth into it until the very end. This can interest them sometimes if what they are trying to join is not all-inclusive or accepting at first because it makes them try that much harder. IT gives them work with a purpose.

When Fixed signs get on a project, even after it is done, it can be really hard for them to let go and sometimes they just do not let go at all. That can be their stubbornness. They know that it is time for something to be over, they see that it is a lost cause, but because of the hard work they put it into it, they refuse to accept this and they might even put even more work into to get life back into the project.

Fixed signs are the type of people to follow their soul or gut feeling. IF they get the feeling that they should be doing something, they see it done to the end. If they get the feeling that something they started has turned toxic and they have to let it go, they drop it like a hot rock with little or no prior warning. Their work is supposed to give them a feeling of purpose so they do not feel anything towards the work that they are doing, then they are likely to either drop the project or have a very hard time of getting it done it if they have to.

Taurus people are often described as the anchors of the zodiac. They are stubborn- but not arrogant. These people are trustworthy, smart, ambitious, and they want other people’s honesty as much as they give others’ their own. People born under the sign Taurus are very strong minded and it takes a very strong force or points to nudge their thinking even a little bit. If a Taurus changes their minds it is because they themselves decided to or they had a change of heart.

Taurus is an Earth sign (this results in being firm-footed and realistic) that is ruled by Venus (give them creativity, tenderness, and dependable).

Overall, Taurus people are devoted, patient, stable, and responsible. They can also be a bit possessive and it can be a little hard to reach a compromise with them. While these people are fans romance, gardening, and hands-on stuff, they do not care for fast changes, their own insecurities, or unforeseen roadblocks.

Leos are ruled by the Sun (gives them their energy and want of being in the center) and are paired the fire element (gives them the bravery to set things going). These people are ambitious go-getters that love it best when they are at center stage whenever they can be. They are also highly creative and they have strength and energy that makes almost every task they encounter possible. When someone hears of Leo, they think of a lion and that is not wrong when it comes to this Zodiac. They are strong leaders that can be a follower but prefer to be a trailblazer.

People born as Leos are proud, strong, loyal, have a sense of honor that not all of the signs have. While Leos being the ones to get things rolling does not sound all the much like a Fixed sign, the fixed point some from how surely-footed Leos are in their ways. They have a way they need to do different things and if it is not done in that way, it can make them angry or hard to work with.

When it comes to Scorpios, they are some of the most observant people you will ever lay your eyes on. They are people watchers and they have a fun time with it, even. Because of how sure these people can be when due to their detail-oriented being, things are usually black and white, there is little to no grey area as far as they are concerned. They have an intuition that other signs lack and a curiosity that outshines that of most other signs.

Scorpios are under the water element. Now when people think of the water element, they think free-flowing and emotional. In the case of the Scorpios, Water comes in because it is where they get their curiosity. Their wonder runs as deep as deep as the sea. Scorpios are under the rulings of Pluto and Mars. When these two rulers- the Gods of war and the Underworld- Scorpios are left with awareness and motivation that can leave other signs shocked. Overall, these people are focused, intense, intuitive, and temperamental if someone gets tries to stop them.

For the most part, people born under the sign Aquarius are shy yet eccentric. They might have trouble getting to know a new person (they love spending time with well-known family and friends, though), but they are not afraid to be themselves all the same.

With Aquarius being an air sign, they are highly creative- which might be where eccentrics is from- and they are more likely to go with the flow of things than other Fixed signs might. Though they are shy, they can be rebellious and get people to their feet as well.

Aquarius people are ruled by both Saturn and Uranus and it shows. Because of Uranus, these people are shy and sometimes even timid. However, since they are also ruled by Saturn, they can be stern when they feel the need to be and they can even fiercely stand their ground. With Saturn and Uranus working together, Aquarius people are amazing visionaries that have the way and energy to bring their varying ideas to the world.

Fixed signs are very hard workers, they are dedicated, and it is going to take a lot to get them to let go of something that means a lot to them. They are smart and not ones to be pushed around. And though it seems like Fixed signs would all be alike because of fixed being a word hitting at unmoveable, each of the four signs is different in their own ways. That is where being a Fixed sign. They are who are they are and not a lot of people are ever able to force them to change their ways whether in action or in thought.