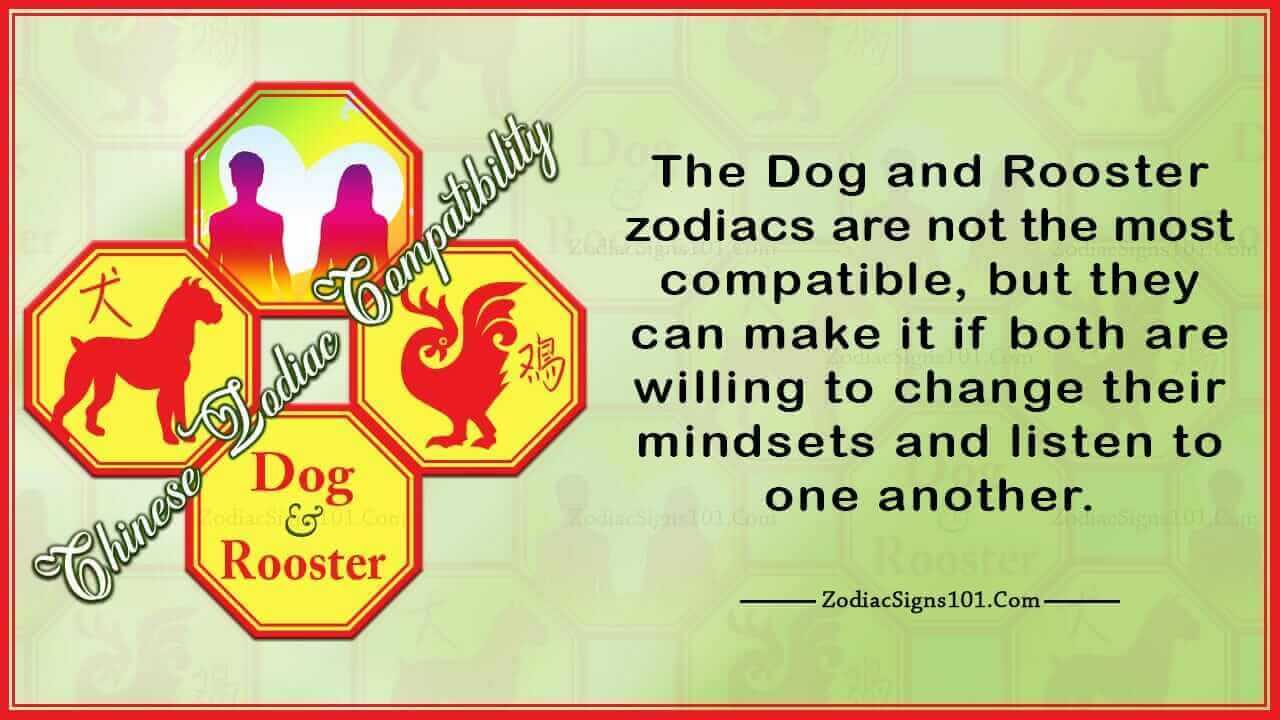 According to the Dog Rooster compatibility, this couple doesn’t make the best pair. Overall, there is a fifty-fifty coin flip on if the relationship will work out in the end. Chances are there is not going to be a lot of love, but rather a sort of indifference like both parties is settling for the match. A “this may as well happen” match. Keep reading to learn more about Dogs, Roosters, and why the Dog Rooster compatibility report shows more chaos than romance.

The two best words to be used when describing a Dog would be honest and loyal. In addition to those two, they are also sincere, stubborn, and they are not big fans of loud life. They would much prefer to have a small and close group over a loud and big crowd. When all is said and done, Dogs like spending time with their family and friends because it can help them to cool down after the bad things in the outside world.

Dogs are some of the least selfish people you can meet. They are very kind and hardly ever put their wants above someone else’s, let alone someone else’s needs. Dogs are bluntly honest when they feel the need to be or simply when they have forgotten their verbal filter. So because of Dogs being cynical of most things and even some people, they can have a snippy side to them that the other Chinese Zodiacs might not have.

Roosters are almost always on time if they are not early. They are not the most loyal people, but they are smart, honest, ambitious, and good at communicating. They can be excited about something one second. Then, half a second later, they could not care less. These people are independent, witty, impatient, eccentric, selfish, and narrow-minded.  People born in the years above are also known for having a hot temper and they are not ones for relying on others when they can help it.

Roosters are fairly imaginative and they can be good at observing others. They are pretty good leaders. Rarely, are they afraid to take the full lead of a situation. Not to mention their ability to adapt to almost any setting gives them a heads up on that leadership. Roosters are intelligent and enjoy deep conversations. It should not be forgotten that while most societies see chickens are being cowards. However, people born in the year of the Rooster have a lot of bravery under their belts and they love to let it shine.

Sometimes, it so works out that the two complement each other pretty decently. Dogs are usually steadfast people who hold close to their principles and do not really jump from idea to idea. Roosters on the other hand, because they are witty and eccentric, can change their minds at the drop of a dime if they so choose (but do not count on being able to talk them into changing their minds) and that can be entertaining in a way to the Dog.

Too Alike or Too Different?

One of the reasons why Dog Rooster compatibility points to failure is because these Chinese zodiac signs are too much alike in their personalities. They are both honest, intelligent, and caring. That sounds about perfect? But when you look at them from a distance, they are also stubborn and blunt. This where the clash comes in. Dogs are loyal while Roosters tend to be a bit flighty.

Things between a Dog and a Rooster are not for the best. They can get along fine in a friendship, but a relationship between these two is not likely to go well. It is possible for them to be intimate at times, but at others, it can be hard for them to stomach each other. Both being stubborn and blunt and bring around troubles as well if they get into an argument. It is not uncommon for both to throw words back and forth at each other, but this can

Both parties are creative at times but in very varying ways. A Dog is creative in ways of spending time while the Rooster is cleaver in lines of work and the Rooster can be known to hold this above the Dog or even taunt them with it.

Roosters are usually very controlling and will not back not even an inch until they are in complete control. This can annoy and even anger the Dog. After a while, the Dog may be able to show the Rooster that they will not be controlled and they can reach some form of a compromise that leaves both parties as content as can be.

Rooster and Dog zodiacs are not the most compatible, but they can make it if both are willing to change their mindsets and listen to one another. This can be hard for both of them to do because of how stubborn and close-minded they can be, but it can take time. If it is discovered by either person that it will not work in the end, they can still be good friends or even amazing business partners or coworkers. 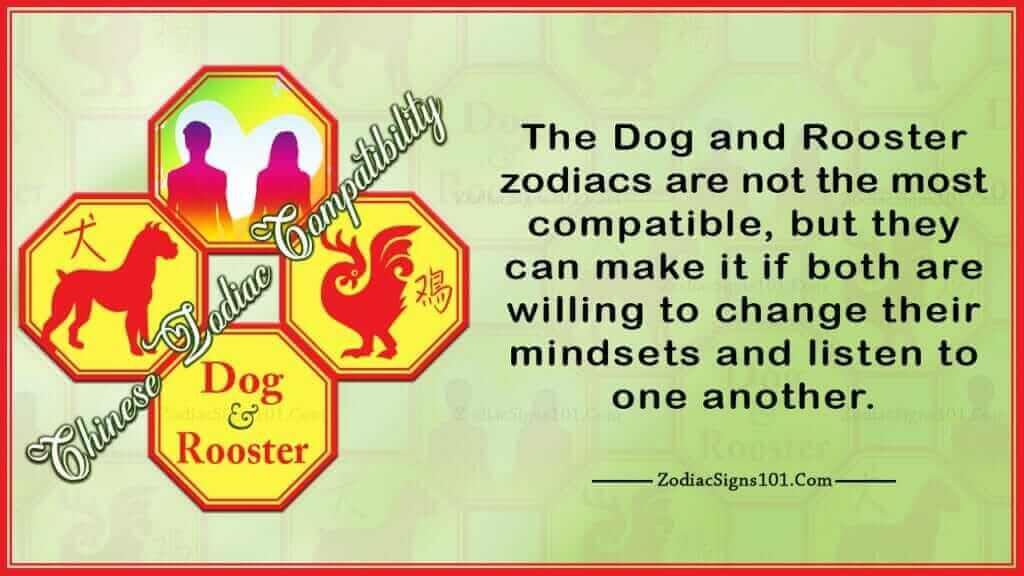 Dog and Rooster being business partners is one of the smartest pairs this match can make. They do not have to be with each other all the time, they can combine their organizational skills, and there can be a tiebreaker present for if they get caught in a stubborn headlock. So while a relationship might not work out in the end, that does not mean that can not get along at all.