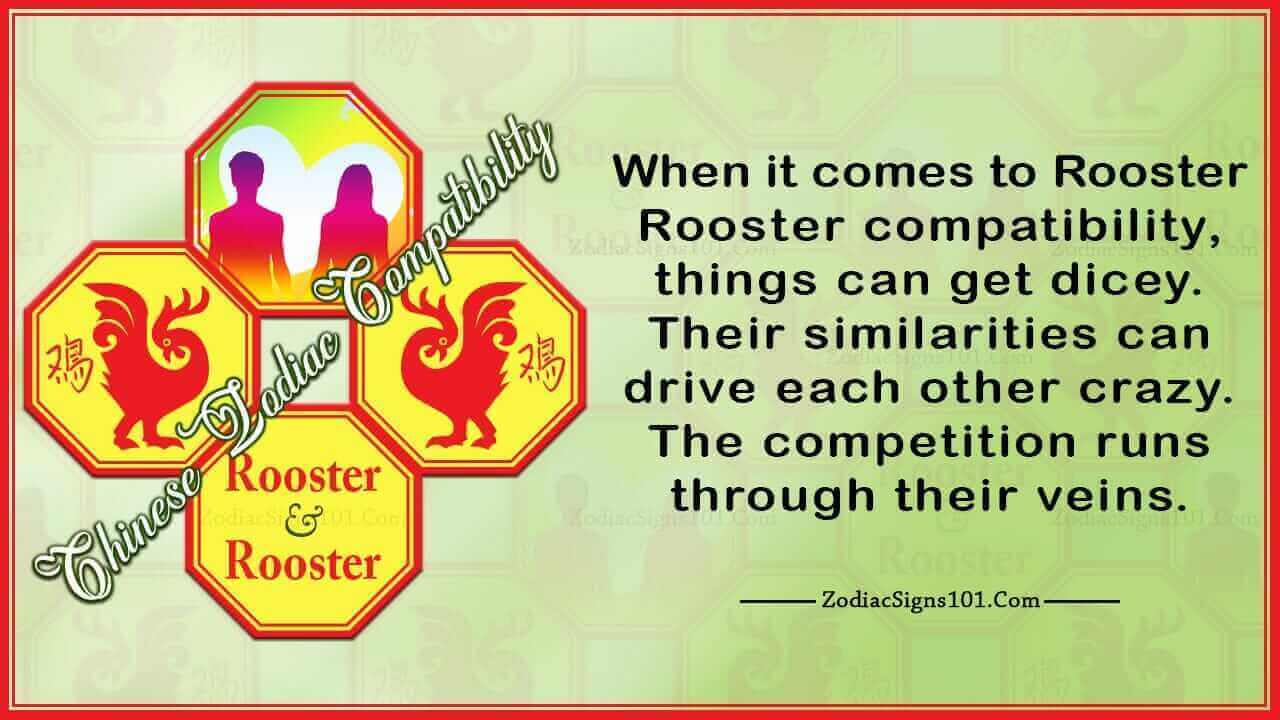 When it comes to someone born in any of the years above, the best four words to sum them up are luck, work, money, and love. Overall, they are interesting people. They are eccentric and they are not at all shy to show it. Some would even call them flamboyant when it comes down to it. These people are very hard working determined so that they can get things done. In fact, is not rare for a Rooster to have multiple projects- that they willingly took on- going on at once. They take challenges with a grin to prove to both themselves and other people that they can do it.

Roosters are usually very organized people. Every little thing has its place on a certain shelf. They come about this need for neatness naturally, and they can either try to help other people to become more organized or they just clean up after them. Roosters can be a little impulsive. They can be fond of one person for a while and then the second they have lost all interest and are then interested in someone else. This goes for objects well. They can be saving up for something for months and then find something and they want that instead, completely forgetting about the first object in a matter of seconds. They can be greedy and overly proud at times with how much success they tend to have from diving headfirst into their challenges.

As far as Roosters are concerned, being paired with another Rooster is one of the worst choices they can possibly make. They have a very low chance of getting very far into a relationship. They can often feel like they are better than the other and this can cause a number of fights over petty things that do not need to be fought over. Roosters can be stuck in trying to outdo each other which just leads to more stress and cause more distance between them. Two Roosters can be strong in love and not get along.

Things can start out well and strong in the start because they can find that being so alike is a good thing; they agree on almost everything, their house is immaculate, and it goes on as an almost perfect match. However, as the two get to know each other better, then issues of which one is more capable of different things. Instead of the cute TV idea or loving rivals in the kitchen resulting in a playful food fight, it can actually result in a painful breakup.

Even if the two Roosters do not split it off, it might be best for both of them as well as the people around them. Thought it seems like being in a relationship with someone so like you would be paradise, there is no balance. This can lead to a lot of different arguments that neither person wants to have. These arguments can be over almost anything and none of them are pretty. If they have differing political views or if they stand on different sides of a cause or feelings of an organization, that can make some sparks fly- and not the good kind of spark.

Roosters have a strong sense of perfectionism. Everything has to be perfect and if it is not then there is a problem. This can show itself in a relationship. While a Rooster may think that pointing out some sort of flaw- whether it be in personality or in appearance- they tend to shine a light on these. While the Rooster criticizing might think they are helping the other by showing what needs fixing, it can be really quite painful for the other.

This goes hand in hand with Roosters butting heads to show each other up. Roosters are very strong leaders so putting two leaders together might cause even more problems. Putting two Roosters together results in both of them trying to get into the higher leadership role or the “head of the house”. This is part of the reason why Rooster Rooster relationships don’t always work out. This is not always a good thing and causes result in a hard time for both parties.

A couple for Rooster Rooster compatibility is not the smartest match to go with. It should probably be avoided. While love can bloom from the pair, it is rarely a happy one. Two roosters together can pick each other part instead of building each other up. The area in which they live will be very clean and neat but is it worth all the fighting?

They are not the most cooperative seeing as how they are both leaders and both want things done their way. If they happen to want the same thing then it works out perfectly but if not words can get strong and ugly and someone is likely to get hurt. There are not a lot of plus sides to this match to honest.

Two Roosters can get along as friends because they are not spending all day every day with each other. However, that still does not mean it is ideal. As far as business partners both being Rooster goes, it might be worth a try. Do not hold your breath. Two people fighting over who the leader of the business is and how things are going to get done? Something as simple as a stationary pen might get them going. So maybe give the relationship, friendship, or partnership a try. However, try not to get too angry at each other if things do not happen to work out.