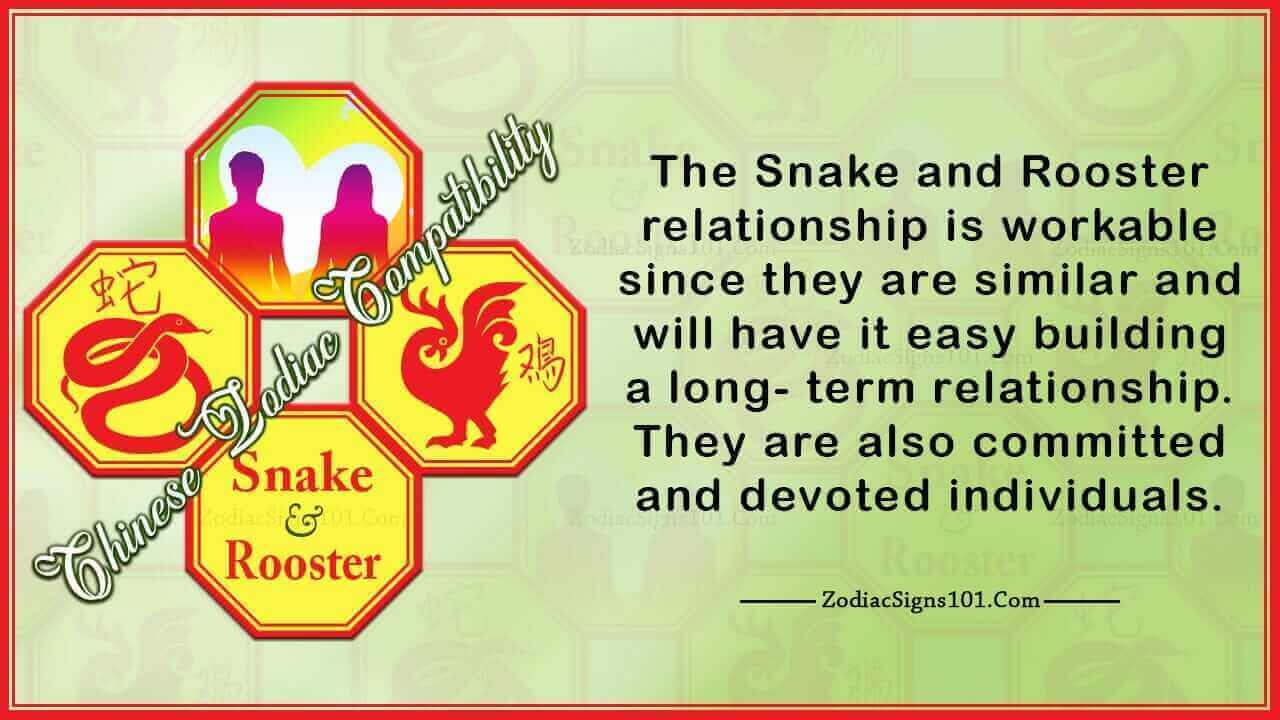 The Snake Rooster compatibility is high since these two have so much in common. Due to their similarities, they find it easy to create a strong relationship. This is because the understanding between them will be strong. Both of them possess amazing traits so they will be important to each other. Although they have some slight differences between them, they will be able to complement each other well. The Snake Rooster relationship looks workable. Will this be the case? Let us have a look at how this Chinese compatibility will work out.

The force of attraction between the Snake and Rooster will be strong. Each of them will fall for the other’s wonderful traits. The Snake finds the Rooster’s charming and social nature to be fascinating. Roosters love to be out of the house sometimes and while out, they participate in social exchanges. The Snake will love to join the Rooster in their numerous expeditions. On the other hand, the Rooster will fall for the Snake’s charisma and an admirable companion. This strong attraction between them will set the foundation for the success of their love match.

They Are Quite Similar

The Snake and the Rooster have things in common. Neither are outgoing. Although the Rooster loves social engagements, they adore homely comforts. The two love spending their time at home and will not bother the other to do things they will not be comfortable with. In addition, the two tend to be social. They enjoy spending their time with friends, family, or business partners. Also, the two are stable characters. They will be happy to settle down as soon as they feel they are perfect for each other. Since they enjoy similar things, they love spending quality time together. This will contribute to a strong love match between them.

They Will be Important to Each Other

The Snake and Rooster possess wonderful character traits so when they come together, they will be able to bring their traits to the table. They will complement one another well and will be important to each other. The Rooster pays attention to all major details. They will ensure their home is clean and tidy. The Rooster will be tasked with decorating their house and making sure everything is in perfect shape Moreover, Roosters are committed, trustworthy, and devoted individuals. The Rooster will never cheat on their mate. They will do all they can to make their partnership perfect. The Rooster is also caring so they take care of the Snake. On the other hand, the Snake is hardworking and good with money. The Snake will be the one tasked with fending for their family. Looking at this, the Snake and Rooster will form a great team.

The Downsides to the Snake Rooster Compatibility

The Snake Rooster relationship looks workable. However, just like many other relationships, there are some problems that will face them. Let us have a look at some.

One major problem that faces them comes from the Snake. Snakes are usually emotionally insecure so they love to be encouraged on a constant basis. This is the only way they are able to feel safe with their feelings. This is something the Rooster might not be able to guarantee. Roosters are outgoing and sociable so they usually have little time to think about feelings and emotions. The Rooster also loves to be out of the house and would not spend time at home with their Snake mate. Issues will arise between them. The Rooster sees the Snake as nagging. However, the Snake will choose to look for someone that will take care of their feelings. For them to have a perfect relationship, the Rooster has to understand the emotional nature of the Snake. This will help them to grant the Rooster the emotional security they desire.

The Rooster is a natural perfectionist so they want everything around them to be perfect They set high standards for those around, including their mate. The Rooster will set these same goals for their Snake mate. The Snake is not resourceful in life. Due to this, the Rooster might end up criticizing them and this, in the long run, will not go down well. It will lead to numerous problems between them. The Rooster has to expect less of the Snake. This is the only way they will be able to have a happy relationship.

The Snake Rooster relationship is workable since they are similar and will have it easy building a long- term relationship. Neither are outgoing and love spending their time together at home. This will enable them to create a strong bond between them. They are also committed and devoted individuals. Therefore, they will work extremely hard towards making their relationship a success. Despite this, there are some things that will face them. However, they will be able to solve them easily. The Snake Rooster relationship is a match made in heaven.