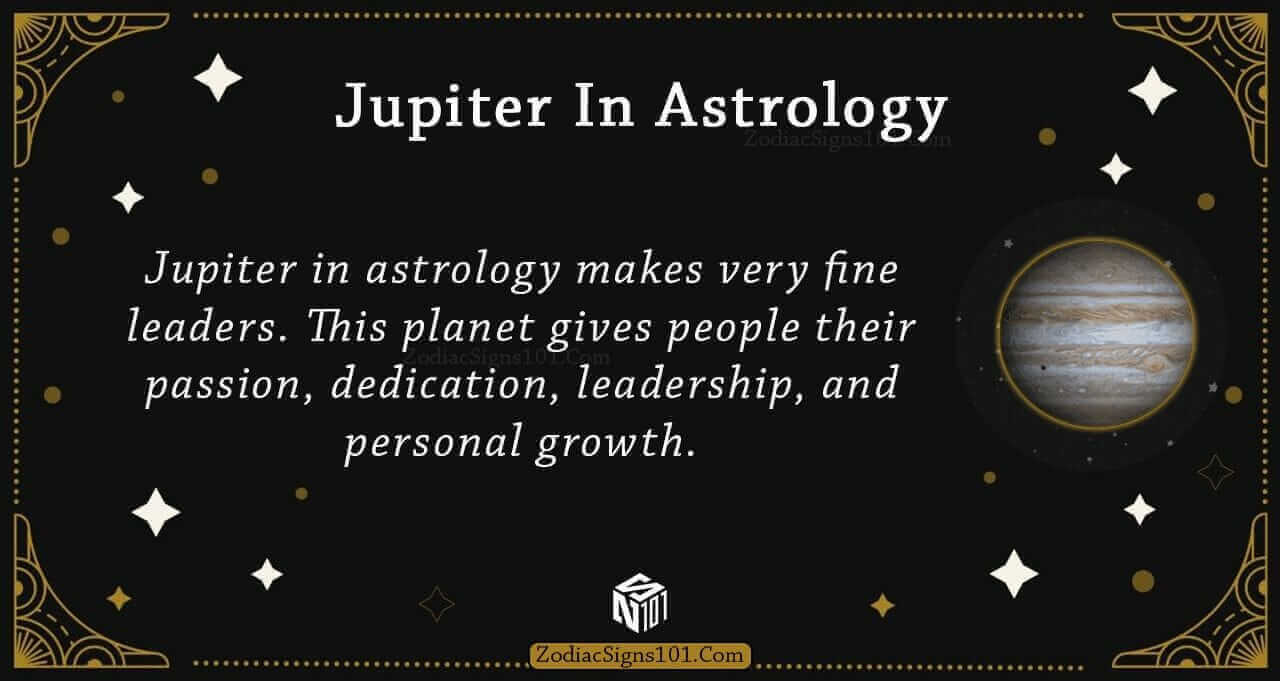 Jupiter, overall, stands for knowledge, strength of expansion, and authority. The planet also rules over sportsmanship, while trying to bring everyone prosperity. Jupiter in astrology grants people the ability to see other things and to broaden their horizons with new ideas and hobbies. People get their loyalty, goodness, luck, optimism, generosity, and helpfulness from Jupiter.

Jupiter also rules over religious and government leaders.That includes people like generous friends, judges, and marriage protectors. When someones take in a sudden leap of faith with fingers crossed that things are going to play out for the best, it is Jupiter guiding those actions to nudge them from their comfort zones.

Jupiter is the largest planet in the Solar System so it takes a while for the planet to get around the sun. While Earth goes around the Sun in 365 days, Jupiter takes roughly 12 of our years to orbit the Sun. Jupiter has four moons going around it compared to the one of Earth.

When a planet is in retrograde, it is spinning backward on its axis. So when the planet itself is going backward, that means that everything it rules over also goes backward. When Jupiter is in retrograde, it can play a major role in leading that someone does. They can become overconfident which can result in serious problems if they are too bossy without being understanding towards the people working with them. They can become self-indulgent and obsessed which is not the best thing for a leader to be. If things start to feel off or if it noticeable to oneself that they are acting differently, perhaps they should try their best to humble themselves or to take a step back so that they do not become their own worst enemy.

How Jupiter in Astrology Affects Personality

People guided by Jupiter are able to see the bigger picture. This gives them a strong craving for having a purpose and making a change in their lifetime. Going by this, these people are heavily interested in humanitarian efforts and philosophy. When Jupiter followers get an idea in their head, it does not take them long to get their idea or daydream to become a reality. It rare for the idea to fail.

Jupiter in astrology leads people to set large goals for themselves, no matter what it is that the projector time may be. Those born under Jupiter are motivated when they set difficult goals for themselves. Curiosity brought by Jupiter also helps to make these people passionate about their project.

People following Jupiter are generally happy people. They have close friends and they always have something to do, they make strong leaders so they are able to lead their friends in these projects. They focus a decent amount on personal improvement so they are not just leading their friends to do well on things, but they are also leading themselves in a way. It keeps them loyal and stops them from being hypocritical.

Jupiter is tightly linked to growth and it shows. People that are in touch with Jupiter use their curiosity to let themselves grow both mentally and emotionally. A new subject, cause, effort, or hobby catches their attention and they jump on it. They might even continue learning it even after they have mastered it. If they feel that the new interest can make a change in the world around them, they will see it through to the end.

Emotional growth comes from the bond that  Jupiter people make with those that they lead or influence. They get close to them and open up more and build relationships with them. From there, they have a stronger emotion that maybe they did not know they were able to feel before. Emotional growth can be linked to mental growth. They become impassioned by the cause of effort. Also, they get excited and attached the subject or hobby they have taken up.

Those led by Jupiter are gentle leaders themselves. They do not take command of things by storm but rather they get the movements started themselves. Often, others are fast to follow. There is a fast growth of loyalty that spreads quickly between the one guided by Jupiter and those that follow them.

Jupiter is all for helping people and making positive differences in people’s lives. There are a couple of career paths might work best for someone who is heavily guided by this planet. These careers include a lawyer or judge, a teacher or professor, or maybe something along the lines of a priest, preacher, or missionary. At times, people following Jupiter make amazing farmers.

Jupiter in astrology makes very fine leaders. This makes perfect sense when it is considered that Jupiter is the father of all the Gods in Roman mythology. This planet gives people their passion, dedication, leadership, and personal growth. It can help people to find their self-confidence when they get in touch with Jupiter.

Leaders with Jupiter in their birth charts are generous, friendly, easy to talk to, loyal. Thought they may set the bar rather high for themselves, and thereby the people working with them, they will be with the people working alongside them every step of the way to help them get there.