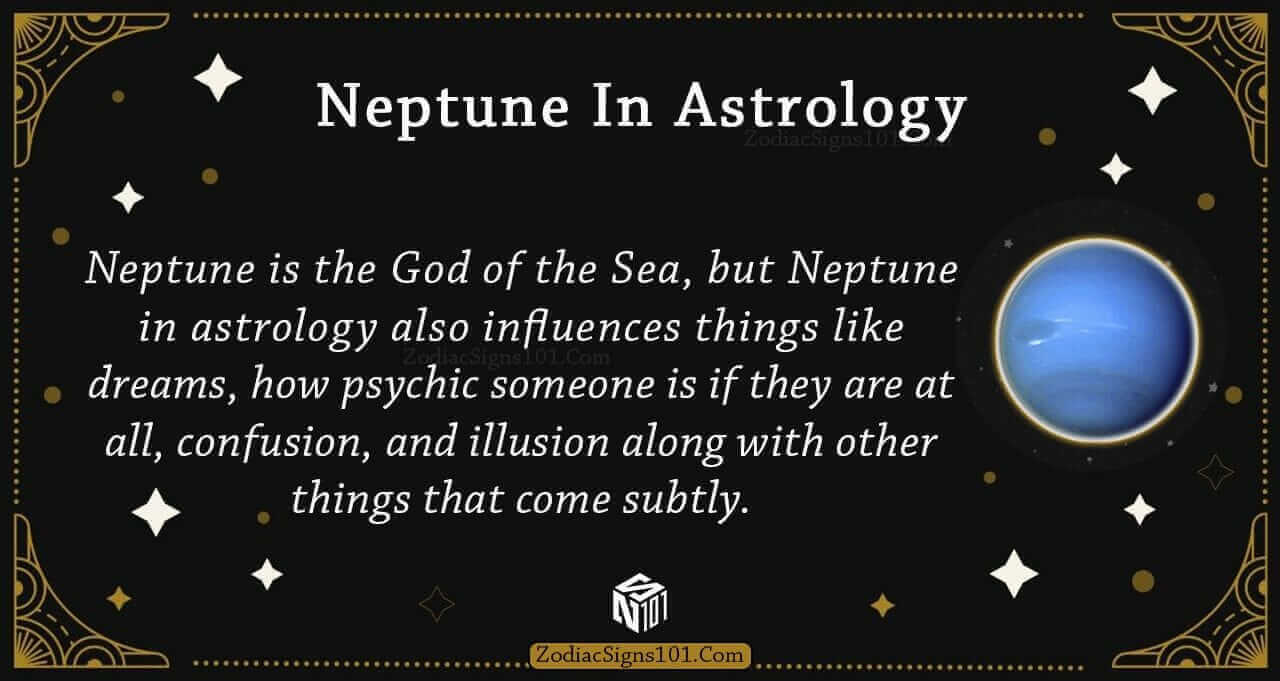 Neptune is the God of the Sea, but Neptune in astrology also influences things like dreams, how psychic someone is if they are at all, confusion, and illusion along with other things that come subtly.

For the most part, Neptune in astrology shows itself as positive things such as spiritual enlightenment, youth, and intuition.  The good that it brings is also shown through compassion and mercy. Some of the “worse” side it brings variations of trickery, guilt, deception, and even addiction.

When people think of the sides of their brain, the left brain is always logical and analytical. The right brain, on the other hand, is all creativity and emotion. Neptune is the unblocked tap to the right brain.

Neptune itself is considered both an ice and gas giant, It has the second strongest gravitational pull in the Solar System. Neptune has a couple of rings around it, but not nearly as many as Saturn does so not a lot of people mention the rings. This was one of the later found planets, as it was not first seen until the 19th century. The average temperature of Neptune is about -214 degrees Celsius. Part of why it is so cold is its distance from the Sun. That distance is the same reason as to why it takes the planet about 165 years to orbit around the Sun once.

When Neptune is in retograde, most people have a bad time. Almost everything is completely backward. The strong emotions are still there. Instead of Neptune being comforting and taking people away to Neverland a while, they are dropped into reality without a working parachute.

People who usually see the world through rose-tinted glasses are now seeing the ugly truth of things. While this time may seem scary to them, this time gives them a chance to grow more spiritually and it gives them more time to really to get know themselves. It gives them the chance to see what really is going well and what needs fixing before too long.

The best advice that can be given to people who are suddenly faced the mess of reality when they return from Narnia is to follow their gut. Even if things feel off a shaky, following their gut is the best possible thing that can be done.

How Neptune in Astrology Affects Personality

Neptune is a very gentle and loving planet that brings people to find their dreams, their illusions, and helps them to fully touch on what gives them a feeling of magic and fantasy. This planet, rather teaching hatred, tries to teach people to love each other and themselves. People born under Neptune cannot stand the coarseness and abrasions of hatred.

To further teach people how to love one another, Neptune allows us to be good with communication so everyone has a more sound understanding of everyone else around them. The planet is a very sensitive one. The people who are most in tune with it make some of the best artists because they need a way to express their feelings and love.

All of this sounds amazing, but it should also be noted that Neptune can lead people to addictions if they are not careful. Neptune in astrology can open up floodgates of feelings and emotions or it can totally close those. People who follow Neptune have to be careful because this can be a lead in for drugs and alcohol and their hold is hard to break.

In certain ways, Saturn and Neptune work together to help people find their passions, loves, and interests. Neptune helps people to be compassionate and helpful towards each other. At times, it can get to the point where people will sacrifice things, including their own health, to help others.

People guided by Neptune are not large fans of confrontation. They are rather calming and peaceful people when they have a good grip on their emotions. These people are not the best at hiding emotions from others but those who are have taken the time to learn how to build the walls. Distrust, anger, and pain are emotions just as much as joy, sadness, and excitement are.

Once again, Neptune and Saturn work together to bring people closer together or to help them find rest and break from the mundane. Neptune is what gives people their sense of fantasy and magic. When people have to get away from the real world for a while and they find solace in magical places like Middle Earth or Narnia.

Imagination also plays into how people release their emotions in healthy ways. By doing this, they can try to avoid the danger of drugs and alcohol that Neptune can sometimes cause. Neptune releases the imagination people need for their talents in the fine arts.

Due to the gentle, artistic, and loving nature that Neptune brings, people guided by the planet should consider a career in the fine arts. Acting, singing, painting or sculpting, pottery, writing books or poetry, or dance are all great careers for someone born under Neptune. Do something that completely lets your right brain run wild can explore.

Neptune is all about emotions, dreams, and imagination. Let your inner Peter Pan soar, rather than anchor the Jolly Roger down in one spot for too long. People lead by Neptune are gentle, loving, and are not large fans of confrontation. They vastly prefer peace and harmony to anger and hatred,. Still, they can most certainly feel anger after they try to hide it for too long.