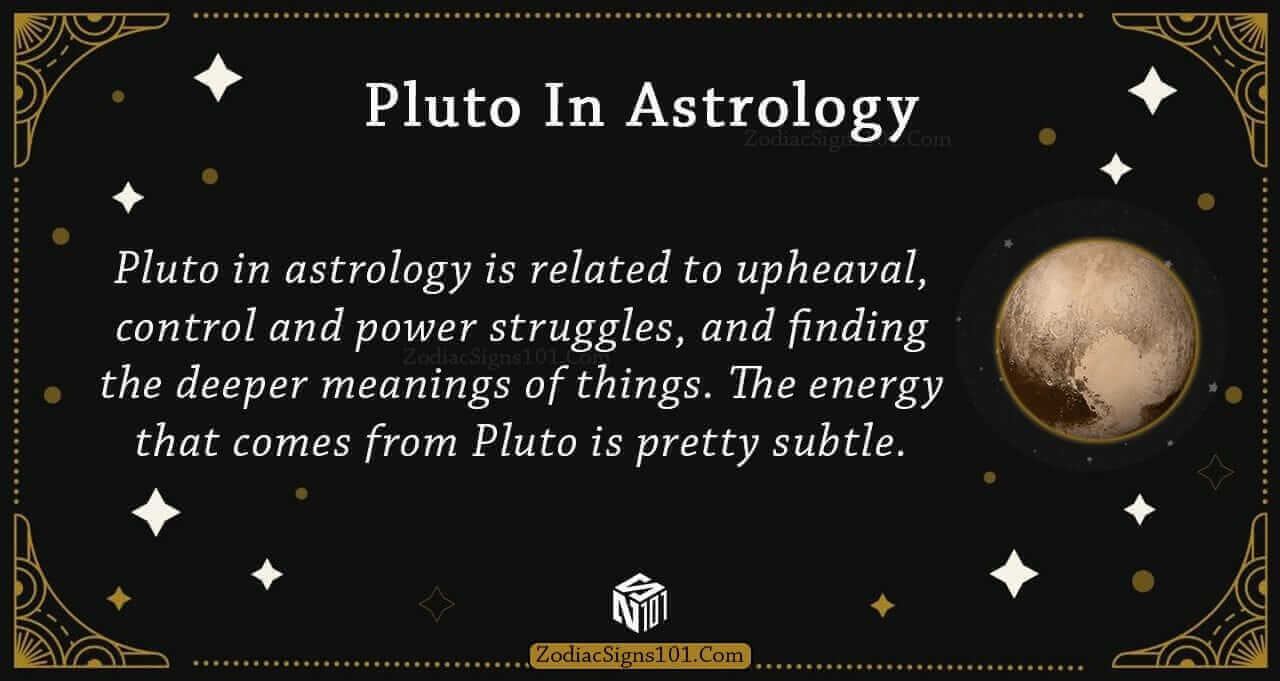 When it comes to Pluto in astrology, this planet is all about changing under the surface. Self-transformation in a few different ways including little tweaks in the subconscious are all controlled by Pluto.

This planet is about the endings of things as well as the rebirth and coming growth. Pluto teaches us that something must be destroyed before something new and better can be built there.

Pluto in astrology is related to upheaval, control and power struggles, and finding the deeper meanings of things. The energy that comes from Pluto is pretty subtle. However, the results the planet brings can bring massive changes.

Pluto is the (dwarf) planet farthest from the Sun.  Pluto was discovered in the 1930s. It takes Pluto 248 of Earth’s years to make a full orbit around the Sun. The location of the planet had been predicted before it was officially found. It was so hard to find because of the distance from Earth and how small it is. Pluto baffles some people because the little planet is smaller than a good number of moons in the Solar System, but it still orbits the Sun.

In the past, there has been a debate about whether or not Pluto is a planet or not. Right now, NASA considers Pluto a dwarf planet. However, no matter what Pluto is considered in astronomy, it has always been considered a planet in astrology since its discovery.

With how long it takes Pluto to go around the Sun, it has a longer retrograde period than most of the other planets. Pluto’s retrograde lasts usually about five months of the 12 in a year. Some retrogrades leave people feeling like their world is falling apart, lost and confused, or just that everything is backward and upside down. The retrograde that Pluto has is not really a bad one.

People born under Pluto are released from how intense and almost brutal the planet can be when Pluto is in retrograde. While the planet is spinning backward on its axis, people still learn lessons. However, they learn their lessons at a slower pace than they usually would. It is less like a bandaid being ripped off. People usually feel refreshed, rejuvenated, and stronger once retrograde is over.

This plant does not get nearly as much recognition as it should. For one so small, it really does some amazing things. Pluto in astrology brings people’s biggest mistakes into the light of the Sun. It shows them what their undoing is, was, or will be. However, this planet also gives them a chance at redemption. Once a person reconizes the bad in their life, they can work to improve themselves. Pluto helps a person to see their true self.

Pluto helps us to see things, even if we do not want to see it –their past, their want for power or money, all of the secrets. This is part of how Pluto undoes the bad so that people can rebuild.

People who are ruled by Pluto are possessive at times. It can be with money, in a relationship, a wide amount of things. They are not always cruel to get or keep what they have, but they are certainly protective of it once they get it.

How Pluto in Astrology Affects Personality

Edward Lorenz created a theory called “The Butterfly Effect.” He asked “does the flap of a butterfly’s wings in Brazil set off a tornado in Texas?” and since then the theory has been taken in different ways. Going from a question based around science it has been expanded into the idea that anyone small action can have a monumental result later down the line in time. This idea has a lead way to the makings of books, movies, and videogames.

Now, what does this have to do with Pluto? Pluto is one of the smallest planets in the Solar System but still has a huge effect on the lives of people on Earth. Pluto and the planets that make decisions work together to make the Butterfly Effect. Whatever Pluto brings into the light, the other planets have to figure out what to do with the new information. That can strongly affect and even completely change what has been going on before which ties back to Pluto wanting change.

The thing about Pluto is that it relieves the truths of different things– not when the people are ready but when the planet itself is ready. If something in a relationship is wrong, Pluto does not try to hide it. Rather, Pluto brings things into the light. This way, people can see what is real. However, they don’t always like what they see.

It is sort of like a chip in a teacup. You can notice the very beginnings of the crack in the ceramic and keep ignoring and using the cup. However, sooner or later the crack is going to deeper and at some point, it is going to start leaking. Pluto is what causes the leaking so the cup has to be replaced or fixed.

The issue can be in a job, in a relationship, or with how someone is living. Once Pluto points out the problems in a person’s life, they can go on to fix their issues. As mentioned, the timing of the reveals does not always help the situation. The author Lemony Snicket once said: “If we waited until we’re ready we’ll be waiting for the rest of our lives.”

Pluto is all about making changes or guiding us in making changes. It does so pretty effectively, though not always in the kindest way possible. This planet is like the Phoenix and Alchemy.  People born under Pluto destroy and remake– rising from the ashes if you will.

The planet can be rather harsh and cold at times, but seeing as Pluto is the God of the Underworld (Hades in Greek mythology and Osiris in Egyptian), it could probably be worse.