Triskelion Symbolism: How is this Emblem Important to You?

To fully comprehend the triskelion symbolism, you may need first to know the underlying meaning of the triskelion itself. It is an ancient symbol of the druids, a motif, that has triple spirals that are joint together in the middle some triangle. One can say the structure of the triskelion replicates the Archimedean spirals. In some circles, it is the representation of three human legs. This symbol comes from Sicily, and it means the Isle of Man.

Also, it has other names like Tree Cassyn Vannin. However, in the ancient lands of Brittany is the triskelion. So, like most of the other essential emblems in life, this too has meaning that is very important to us. In the Celtic culture, it bears the definition of passive and active. When you closely stare at the symbol, it seems like something that is always moving. The logo signifies the active parts of our life we invest through the aid of this symbol. Also, it represents how the cosmos gives us a response to our efforts.

On the other hand, the passive part represents the faith, belief, prayer and meditation that we invest in the hope that the universe can reply to us. It is a simple concept. The triskelion only shows you that you need the help of the heavenly beings at times. When this happens, there is a harmonious balance that will help you out.

Symbolic Meaning of the three Arms of the Triskelion

Just by the first look of the triskelion, you will notice that it has three extensions at the edges with spirals. They stand for various things depending on the culture and the belief that you hold about it. Some of these include the mind, spirit, and body. On the other hand, there is the symbolism of Father, the Son, and the Holy Spirit. However, in some of the cultures, they believe that it represents the past, present, and future. In short, there are several symbolic meaning of the triskelion that has a lot of purpose in life.

The combination of these arms is what brings harmony to give the life of any personal meaning. To understand this, people must know that they need to be both active and passive.

Moreover, you cannot work yourself to death or worry that much. Also, you need to have faith in the things that you are doing or working towards will work out. The moment that one of these is cut off from your life, then you will notice exact problems.

In Celtic culture, they understood that these arms of the triskelion needed to go hand in hand. Moreover, they would plant, hunt and even plunder. However, they would also take time to pray to their gods for guidance in life. Also, they knew that there is the presence of the supreme beings in their life and that they are always watching.

Representation of the Three Realms by the Triskelion

Like in most culture and beliefs the triskelion also has the three worlds that make up the entire universe. There is the spirit world that carries the life of the gods and goddesses.

On the other hand, there is the celestial world where the forces of the universe reside. Lastly, there is the world that we live in. The world of living souls, plants, and animals.

This is why the number three is always a significant number in the universe because it represents that lives of all the things in the cosmos. Also, the triskelion describes the phases of the moon and how they affect the three realms of the universe. You know that there are three primary phases of the moon those are the full, half and the new moon.

Association of the Triskelion Symbolism to the Lunar

When you are looking at the association of the triskelion symbolism to the lunar, there some of the traits that you cannot miss. Some of these are intuition, spirituality, illumination, subconscious, feminine, hidden desire and mastery. These some of the meaning of this symbolism as it touches on the matter of the lunar effect. This is one of the reasons why the triskelion’s appearance is a lot in the life of the Celtic people. Moreover, it seeks to teach and guide them in ways that they can live full feelings lives.

Triskelion Symbolism in the Christian Faith

Early in the 5th Century, the Christians took up the teaching of the triskelion into the faith. This took place among the British and the Irish culture when the Romans went there to spread the word of Christianity. However, when you touch on the Christian side, the three arm stands for the Christian triplicates. Later, the triskelion would appear in most of the Celtic Christian arts. Some of these were the cross and Christian manuscripts. Moreover, there are some of the triskelia that would end up on the widows of the churches especially the roman catholic ones. 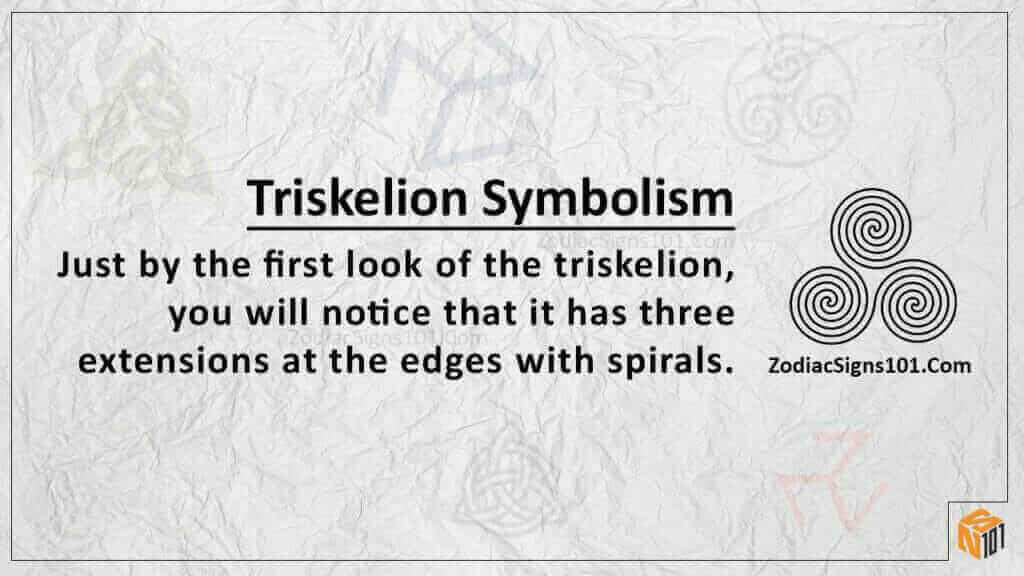 Representation of the Triskelion in the Contemporary Society

Many people and countries adopted the symbol and are using it on things like their flags and logos. For example, the United States of America’s Department of Transportation is using it on their logo. On the other hand, the flag of Sicily has it to represent the Isle of Man. Also, the coat of arm of the Füssen is also having the three extensions of the Triskelion. There are many more places that it appears meaning it represents a lot to the people that are using it.

Triskelion symbolism is an okay way to learn the inner working of the universe and how it represents itself. The people that are having belief on the methods and teaching of the triskelion are most likely to have a quiet life on this earth. Moreover, there is no way that one lifestyle can entirely work without the other.