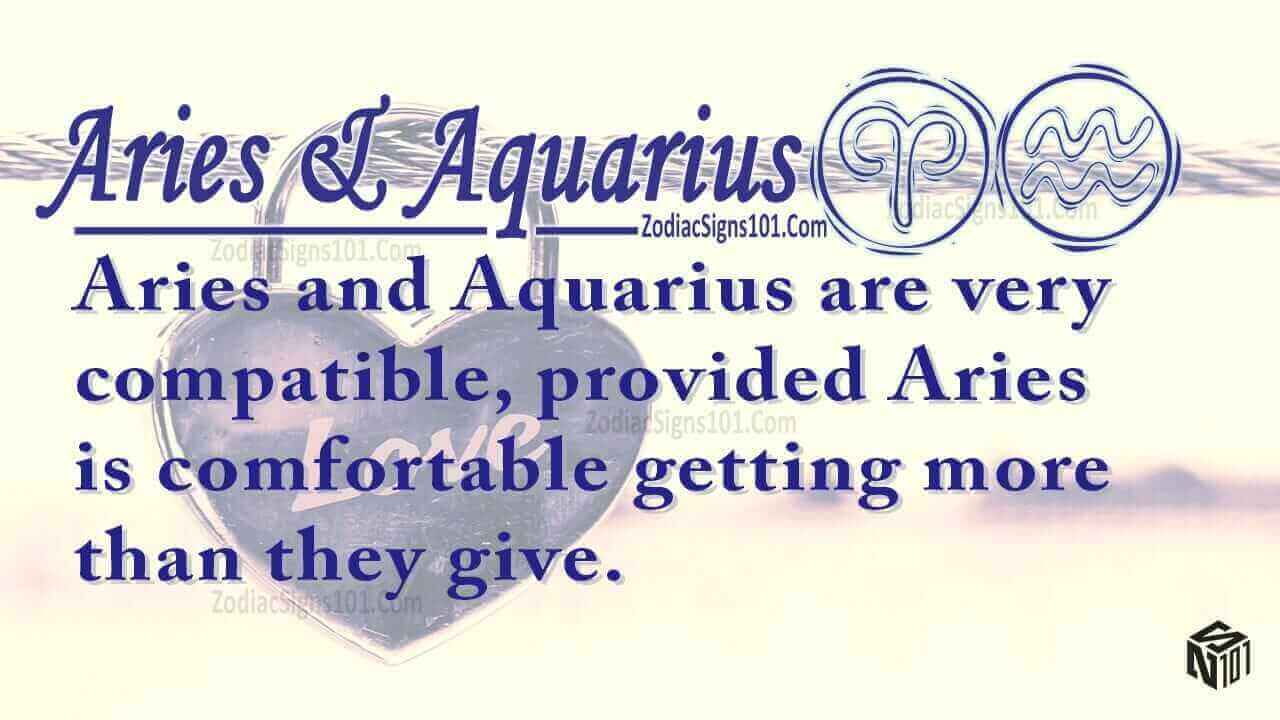 What do these two zodiac signs mean concerning their compatibility?  Will they be able to connect on all levels or will they struggle to find common ground? Here, we take a look at the harmony in an Aries/Aquarius relationship.

Leadership, confidence, and courage are just a few characteristics of individuals born under the sign of Aries (March 21 – April 20).  This zodiac sign is ruled by the planet Mars which is named after the Roman god of war.  Aries likes to be spontaneous and looks for a new adventure at every chance they get.  They don’t want to be held back by anything or anyone because their independence is that important to them.  Their enthusiasm is contagious as it draws people to them and often leads them to have many followers to their strong personalities.  Aries enjoys trying new things and diving into projects that excite them until they have reached that goal or lose interest.

Aquarius (January 21 – February 19) is ruled by the planets Saturn and Uranus.  They also hold tight to their independence just as Aries does and want to be able to express their creativity on their terms or else they aren’t happy.  People born in Aquarius are most likely to be the student in the classroom who is very intelligent but doesn’t learn traditionally.  Hands-on projects, immersion experiences, or artistic tasks are generally their forms of learning.  Aquarius may seem aloof and uninterested at first, but they’re good friends and show how much they care.  They believe in conversations with substance and love that doesn’t become stagnant or routine.

There’s no rush for Aquarius and Aries to start dating right from the start.  Aquarius may play hard to get and maintain an air of mystery.  As they get to know each other better, Aquarius will open up, and the love affair will blossom slowly.  Both Aries and Aquarius are hard-working, adventurous, and independent, which they can respect as a characteristic they share.  That respect for their differences will also carry over because they’re not concerned about changing the other.  Even if Aries is ready for a long-term relationship, Aquarius isn’t so quick to settle down.  Patience will help keep this couple together for a long time.

Positive Attributes in an Aries/Aquarius Relationship

Respect for each other is one of the most positive of any attribute in an Aries/Aquarius relationship.  Aries admires Aquarius’ creativity and the work they produce be it for their employment or their hobby.  Aquarius look up to Aries for their enthusiasm for life and the energy they put into their passions.  Both Aries and Aquarius struggle in completing some of their projects.  For this couple, they have similar traits that connect them and allow them to understand each other.

Aries is straight-forward and approachable while Aquarius can be a bit serious and self-conscious in new social settings.  They can help Aquarius connect more with their circle of friends and can also be supportive when Aquarius needs confidence in their tasks.  At the same time, Aries may be confident, but they know that Aquarius is knowledgeable about many things and may look to Aquarius for new ideas and guidance on a variety of topics.  This guidance can boost Aries in the areas where they falter, mainly when their impulsive decisions affect their project’s success or completion.

When Aries and Aquarius fall in love, their connection is sealed with respect, acceptance, and understanding.  They love the person they’re with, regardless of strengths and weaknesses.  They bring elements of lust and laughter in their sexual encounters and enjoy each other to the fullest.  With Aries’ intensity and Aquarius’s creativity, they’ll never be dull in bed together.  Aquarius may be pleasantly surprised by Aries’ sexual creativity as they explore new positions and experiences.

Negative Attributes in an Aries/Aquarius Relationship

Aries can be stubborn and set in his or her ways.  One of the reasons why their ideas fall apart is because they don’t heed the warnings of those around them. Aquarius is more flexible to change and is often there to support Aries and help them through many projects.  Even if Aquarius is not keen on one of Aries’ latest ideas, Aries may be able to woo him or her to agree to be right, and Aquarius may accommodate to that charm.

One thing that is true about Aries is their need for attention.  They attract friends and love being in the center of it all, but they mainly want it from their partner.  Aquarius may not always have as much focus on Aries as he or she desires, especially if the attention is on another person, and this can set the stage for negative feelings.  Aries can be very demanding, clingy, and jealous which leads to arguments and uncertainty.

That uncertainty may be accurate as Aquarius is the most likely to cheat in a relationship when they’re getting bored or yearn for something new and thrilling outside of their feelings for Aries.  Cheating is less likely to occur when Aries and Aquarius have an emotional connection that’s strong and a sexual connection that’s ready to be explored at any time they need that spark between the two.  Aquarius can and will understand that a one-night stand outside of their current relationship with Aries isn’t acceptable.  Trust and respect will carry this relationship into a marriage.

When it comes to compatibility, these two signs complement each other with their support in each other’s weaknesses and make them a better person when they are together.  This couple has the energy to meet their needs.  Their differences contribute to their compatibility.  Even though Aquarius has a more creative personality, Aries has the drive to make the relationship thrilling and exciting for their lover.  Aquarius can boost the intellectual connection while Aries can amp up the excitement.

It’s not to say that an Aries/Aquarius love connection doesn’t come with its challenges.  These two need to remember to nurture their love for each other.  They can do this with compliments and signs of appreciation.  A little bit of attention goes a long way to maintain trust and fidelity.  They need to remember to respect their differences because that may have been the element that attracted them to each other in the first place.  Since creativity is part of what makes Aquarius tick, Aries can boost their intellectual strength in addition to their spontaneous ideas to find new ways to keep the love alive and kicking.