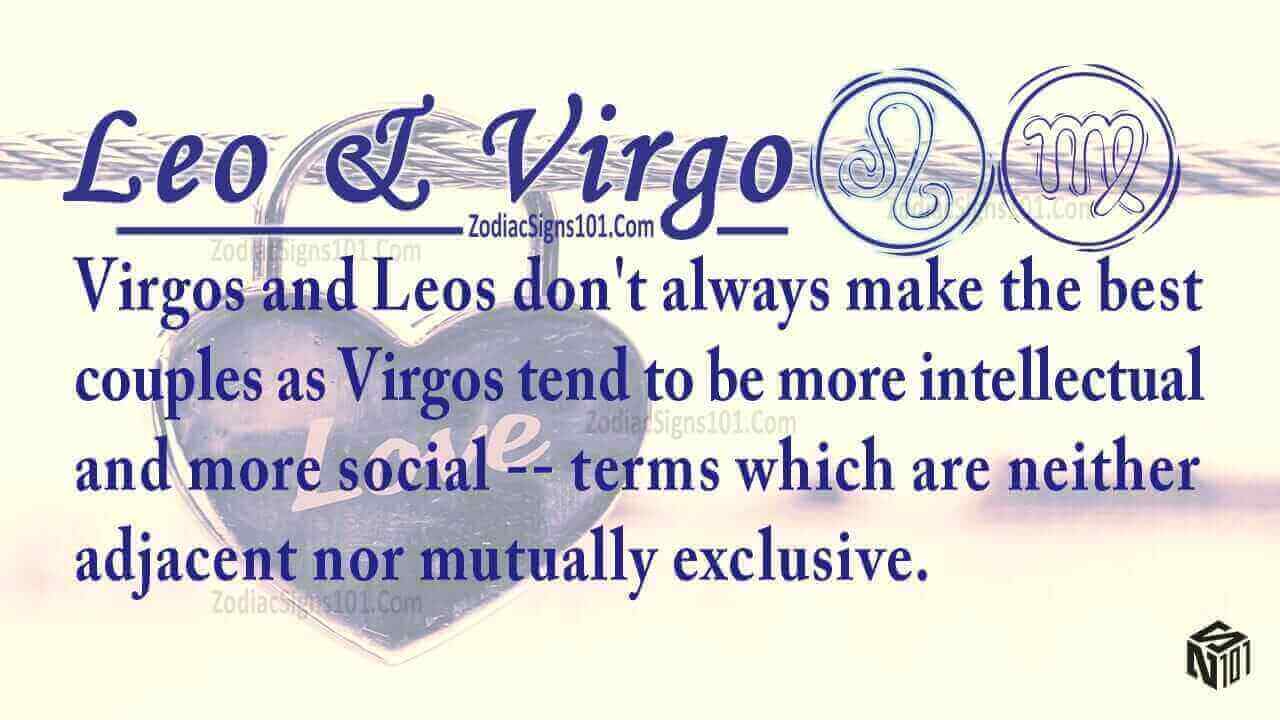 Leo and Virgo can be intense on their own, but will they have what it takes to commit to each other in a loving, long term relationship? Take a closer look at Leo Virgo love compatibility.

Leo (July 23 – August 21) has a personality that takes charge in situations so that they can control the success of a project.  They’re ready to prove their worth to a company, a client, and their circle of friends.  With hard work and high expectations, they take their energy and make the best of their life.  Their competitive nature pushes them to succeed because they don’t want to accept failure.  They’re also fun to be around with their charming smile and flirtatious personality.  Leos love attracting attention and receiving compliments that boost their self-esteem.  Their love interests ideally let them make the major decisions as well as gives them the independence to do what they want.

Virgo (August 22 – September 23) is the perfectionist.  They analyze details so that everything goes off without a hitch and won’t let a problem go unsolved.  Routine is an essential part of their life so that nothing is missed. Their focus and dedication to their work can leave little time for fun – which means relaxing with a few friends or just a book of logic puzzles.  They’ll date, but they won’t fall in love unless they’re confident that they’ve found someone they want to commit to.

While it may not be evident at first, these two signs have more in common than you might think.  Because they’re both independent, they’ll have to make an effort to allow the relationship they want not to get bogged down by their individual goals.

One thing that’s noticeable about a Leo Virgo connection is the ease they have when they talk.  Both of them are good at communicating, and they’ll be drawn by the topics and ideas that come out of their long talks.  Leo loves to learn new things and gain further insight into ideas that interest them. Virgo, on the other hand, has an extensive background knowledge of a variety of situations.  Their next meeting will be on their minds when they learn something else to add to their following conversation.

Leo is charming and entertaining, flirting with their partner and enjoying the attention they get out of it.  If they were into acting, they would easily take the leading role.  Virgo is loving and will give them the attention they seek.  They prefer to be out of the spotlight and play the supporting role for those they care about.   Both are comfortable with how it turns out and wouldn’t have it any other way.

They have confidence that attracts the other, but they don’t have it the same way.  Leo exudes confidence even if they don’t have it completely.  It’s part of their persona of success.  Virgo, on the other hand, is confident in the work they put out because they know it’s perfect because they give 100% in everything they do.  They share a strong work ethic and drive to succeed because they both know what they want. Plus, they both have high goals to reach.  They also understand the importance of having an active support group with their friends and family for those times that they struggle and worry about all they have to do.  They also share a need for stability, particularly financial stability.

Both signs work hard for their money, but how they spend can cause arguments. Leo likes the social status and the material items that come with spending, but they also think about the future by saving for hard times.  They’re aware that hard times can come and those funds can keep them in their current lifestyle.  Virgo thinks that perspective is boring and doesn’t reflect the purpose of excess money.  It may be reinvested into their lifestyle, but not necessarily what they need for their security.

Leo uses their social skills to network, so they may spend long hours at work, entertaining clients, or spending time with their friends.  Virgo is more of a homebody compared to their partner.  They too work hard, but they also have goals to be the best in their job while raising a family.  This can mean they take on a lot and want their significant other to be a part of it all.  They understand the importance of their work and respect their dedication to their career, but they miss having the whole family together more often.

Both of them want to be in control, but the family is one of those areas where they cannot agree who is in control.  They’re both capable, but they’re conflicted when it comes to equal say.  Leo wants to be the head of the household in all respects of the title. However, Virgo is quite capable of managing it and won’t have anyone disturb the perfection they’ve made.  Virgo’s practicality can also dim the romantic gestures and attempts made by their lover.  It isn’t that they’re cold or frigid, but logic and emotion don’t always blend.

When it comes to compatibility, these two signs have a great deal of respect for each other as they’re at the top of their game. Despite this, they need to work together so that they can be at the top as a team.  They can support themselves and each other’s goals, by agreeing on their shared relationship goals.  There needs to be trust in their partnership and respect for their decisions.  While they may not always agree, they’ll know that it’s done for their benefit and success in the long term.  Communication will help in their compromise.  They’re both smart and can handle many situations, so they’re capable of putting the effort and confidence into their relationship.