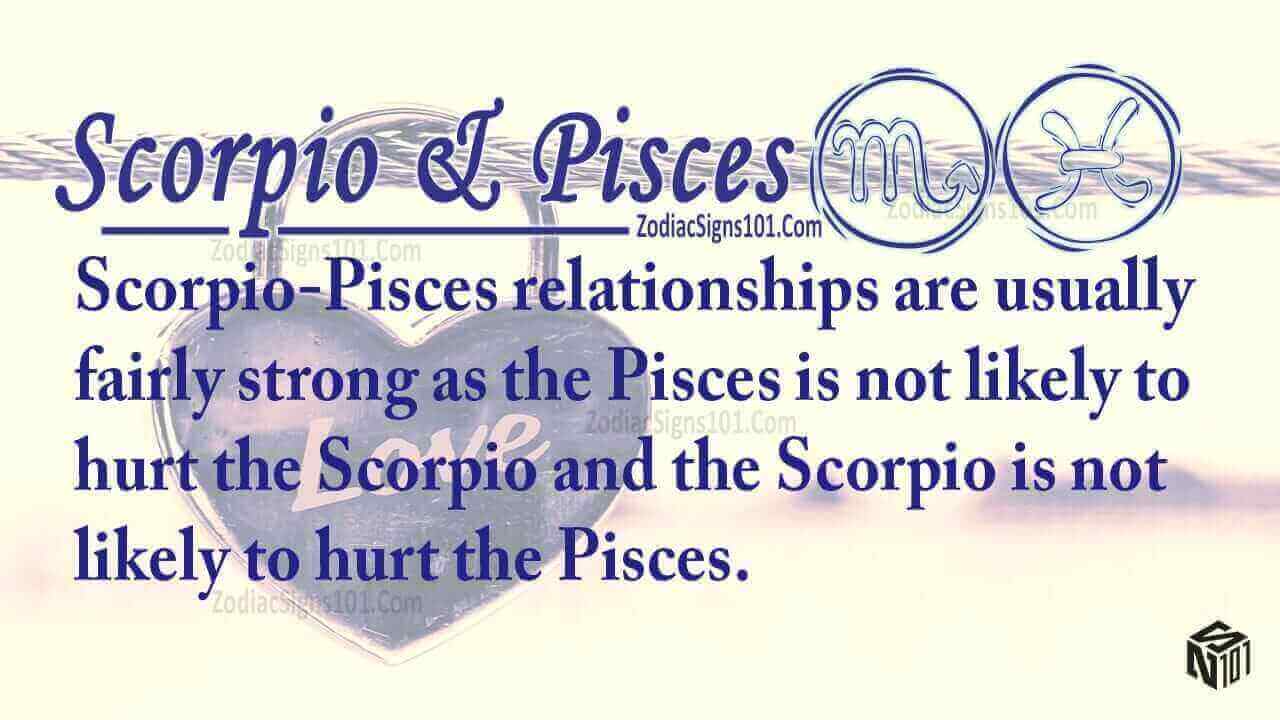 Will it be a happily ever after for these two? Read on to find out about the ups and downs of Scorpio Pisces love compatibility.

Scorpio (October 24 – November 22) is a no-nonsense kind of person who wants to be successful.  They want people to take care of their needs, but they also want to do the work themselves to prove that they’re the best in their field.  If they have to work alongside others, they’d rather delegate and make the decisions because they’re confident in themselves.  Not only that, they keep an eye out on their competition when it comes to promotions or achievements.  If they aren’t successful, they’ll start planning how they’re going to do better.  It’s that determination and intensity that gives them a strong work ethic but weak social life.

When they have friends, they still want to call the shots when they get together.  They will, however, take good care of them when they need it.  The same is true when they fall in love.  They’ll be the ones making the decisions, but they’ll also be the protector of the ones that are closest to their heart.  Not all of their lovers can handle the power they bring into the relationship, while others can love them without making them feel weak or inferior.

Pisces (February 20 – March 20) is very intuitive to emotions.  Since they’re ruled by the moon – which controls emotions – they‘re very familiar with the changes in moods.  They experience it themselves quite a bit.  They’re generally daydreamers who need some guidance to get them back on track when it comes to working.  Their creative ideas can make their life more complicated than it seems, so they need to find a way to stay on track.  They’ll also seek encouragement to make sure that everyone’s happy and they’re doing the right thing.  Even though they come across as shy, they enjoy being around others and making them happy.  When they’re dating, they’ll do what they can to make their partner happy with romantic gestures and little surprises.  They’ll also be very open with their emotions and support their partner’s emotional well-being.

While it may seem unusual, the connection between Scorpio and Pisces is strong.  Scorpio wants to be in control, and Pisces has no issue with that.  The one in control will also do what they can to protect the trusting nature of their partner.  In return, Pisces will take care of the emotional side of their partner with love and devotion.  To maintain the bliss of this relationship, they’ll have to make sure they nurture the positives and establish boundaries. Better communication will help them avoid the brunt of the negative attributes.

As much as Scorpio enjoys having power, they’re also a protector, and their friendships are bonded with trust and loyalty. If someone’s being taken advantage of or hurt, Scorpio will be ready to attack for the honor of their partner.  They know that their lover is kind and generous but can be taken advantage of.  Since that partner may be the only one they share their sensitive side with, they’ll do their part to take care of them.

Pisces will love this kind of attention from their partner.  When they fall in love, they give their whole heart and take care of their lover with a great deal of intuition.  That care can be anything from making their lover’s favorite meals or choosing a movie that they heard was their favorite.  They watch and learn so that they can make their partner comfortable, and Scorpio enjoys being treated with such love.  Since Scorpio has career goals that include executive levels, Pisces would be an ideal match because they’d rather be the one to take care of the home and children.

The roles of the protector and the nurturer carry over in the bedroom as well.  Their emotional connection means that they can be who they are without any barriers.  They understand what the other needs without saying much at all.  Still, they’ll connect mentally because they’ll always find something to talk about.

The protector, like Scorpio, is equipped to take on any challenge.  It’s like they have armor so that they can handle anything that comes their way.  When they get angry or agitated, they’re likely to strike whether it’s with their sharp tongue or devious attacks.  They’re easily jealous and have a hard time expressing their feelings, especially when something upsets them.

However, this isn’t the same for Pisces.  Their heart is on their sleeve, and they don’t know how to defend themselves because they prefer to avoid conflict or confrontation.  By avoiding these things, they aren’t able to express their feelings either.  When both of them bottle up their emotions, there’ll be a time when something sets them off.  They need to be able to say no more than they do, and they need to be able to tell their partner when something is bothering them.

When there’s a problem, their weakness in emotional management can result in the two of them arguing.  If the car breaks down, it’s either Scorpio’s fault for driving too erratically, or it’s Pisces fault because they didn’t take it in for repairs.  Pisces is likely to take the blame to avoid the fight, but they’re doing themselves no favors and need to speak up more.

When it comes to compatibility, these two signs complement each other with love and devotion.  Their lifestyle choices also complement each other.  Both of them will be satisfied with their role and how they take care of their partner.  Their love will nurture each other emotionally through their intuition and ability to read each other, but communication is essential for the more trying, emotional times. As a couple, they need to learn how to express their feelings more so that they aren’t holding in negative emotions that could ruin their relationship.  Boundaries are also important to establish because of the unique partnership these two have.  They make their partner better at what they do, fill the emotional bucket and reassure each other of their love and devotion.  Once their communication is in order, they’ll be able to reap the benefits of their love compatibility.