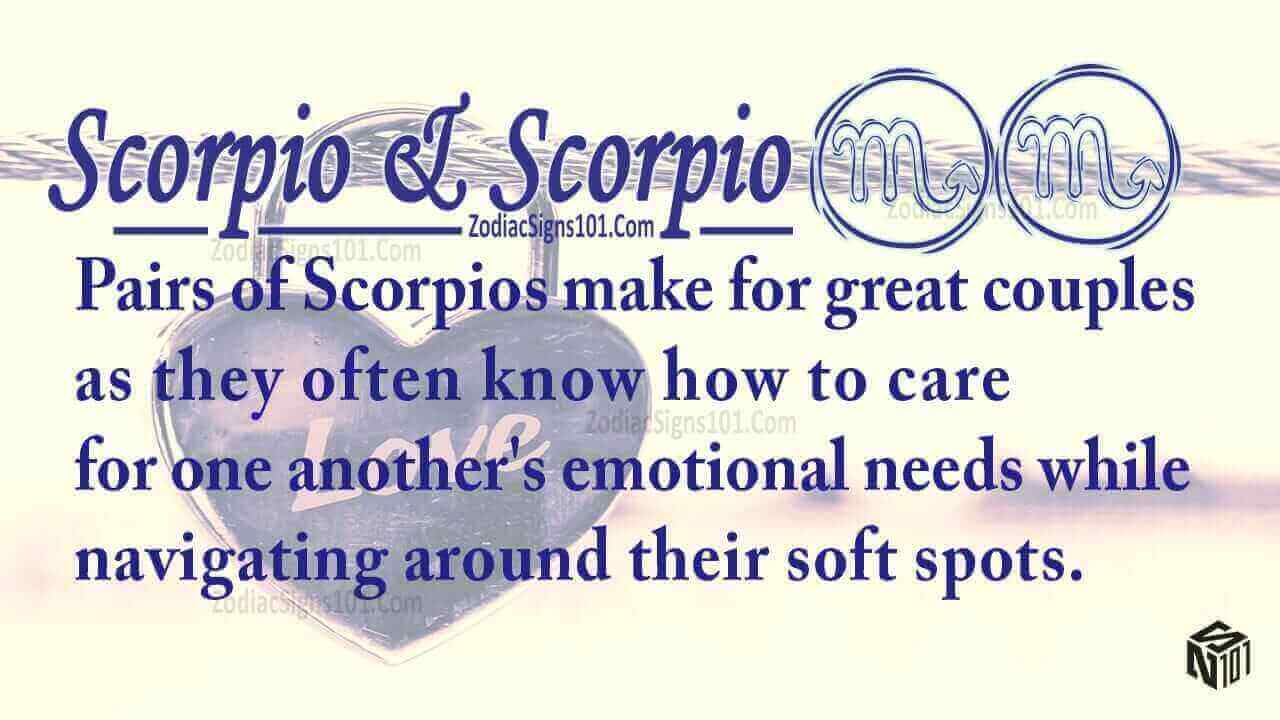 Scorpio (October 24 – November 22) is an intense sign.  Ruled by the planets Pluto and Mars that control power and passion, respectively, they’re driven to be a dominant force.  In their careers, they work their way up with their strong work ethic and their attention to the detail.  They’re ambitious enough to go from a minimum wage worker to the CEO of the business.  Sometimes they’ll do things by whatever means possible.  Business is business, and they won’t have anyone step on their toes.  For this reason, some people don’t want to have much to do with Scorpio so that they can avoid their anger or payback.

In their love life, they love with their whole self with trust and loyalty because they want to find someone they can spend the rest of their lives with.  It’s crucial for them to find someone who shares their traditional values and sense of responsibility.  They also want someone who’ll be loyal and truthful because those values are important to them.

Their independence means that they don’t want anyone’s help when they’re trying to prove their worth and no one will be able to change who they are as a person.  They prefer to work alone because they’re confident in their abilities.  There’s a competitive edge about this sign.  It isn’t about winning races as much as it’s being the best person for the job.

It takes a strong personality to stand up to them and a flexible nature to negotiate with them.  These kinds of complications make it difficult for them to make and keep friends.  They can get possessive when it comes to the people that are close to them.  They’ll protect them, but they may also try to dominate their time together.

A Scorpio Scorpio relationship can be advantageous because no one understands them like others of the same sign.  Both of them work hard and are goal-oriented.  Both of them are introverted and prefer to spend quiet time at home over socialising with large crowds.  They share the same interest for knowledge and hold conversations at the same level of intellect.  There’s an understanding that their intensity is either all or nothing, highs and lows.  There’s little balance when it comes to the emotions of Scorpio.  While this seems to be the most ideal for love compatibility, they have to deal with several issues to ensure that their love for each other is meant to be.

This couple has an understanding.  They respect each other when it comes to their work ethic, understand the drive they have to succeed and know that when one person has set their mind to finishing a project or take on a challenge, it’ll be done to the best of their ability.  These two may not ask each other for help, but if they do, it’s because they need it.

The best thing that can happen when two Scorpios get together is that they know what to expect.  They know the best of their personality and have already dealt with the worst of it.  They want the same things, like a stable home and financial security.  Both of them know that they’re committed to their partner with complete love and loyalty.  They’ll do what they can to protect each other and will readily accept the support and protection from their partner.  If something goes wrong, they’ll have the energy to push through and make things right again.

Their love life is also very intense.  They’re full of energy and excitement as they try to outdo their lover and compete over who can bring the most satisfaction.  The attraction is so hot that it’s a wonder that they’re able to keep it together when they aren’t in the bedroom.

There’s so much passion and intensity with this relationship that it’s inevitable that something will explode.  Their possessive jealousy may cause that explosion.  They want to be committed to someone they trust, but there are several instances which challenge that trust.  This could be from outside influences like someone flirting with their partner, or it could be that they cannot decipher their lover’s mysterious behavior.  Their fighting spirit can do more than protect their lover; it can also be used against them.  Both of them use whatever means necessary to find out the truth and have revenge if their heart is hurt.

Not every Scorpio Scorpio relationship implodes.  Trust is the key to harmony over anger.  The same is true for open communication.  The first thing that both of them need to do is find a way to remain calm.  They aren’t very impulsive so they should be able to breathe before they speak.  If they love and trust their partner, they’ll be able to express their feelings rather than keep them inside.  When they communicate how much they mean to each other, they’ll be able to focus on the positive.

It may be difficult at the beginning of the relationship to determine who’s in control.  There may be times that it’s better for both of them to step back and let one take charge.  Other times they’ll find more harmony by working side by side for the shared outcome.  By working together, they can strengthen the bond of trust between them.

When it comes to compatibility, a Scorpio Scorpio couple is either one that everyone envies because of their intense love or be the couple to avoid with their jealousy issues.  No matter how good or bad it gets, it’s all because of love.  They love with such intensity that they’ll do whatever it takes to show their appreciation to their partner and the world.  By understanding who they are in terms of their zodiac personality, they can bring out and protect the best in them.  At the same time, they need to remember that their partner wants as much trust as they do.  For their relationship to be compatible instead of destructive, they need to be comfortable enough to talk about their concerns and emotions. Doing so will ensure that their intensity goes in the right direction.