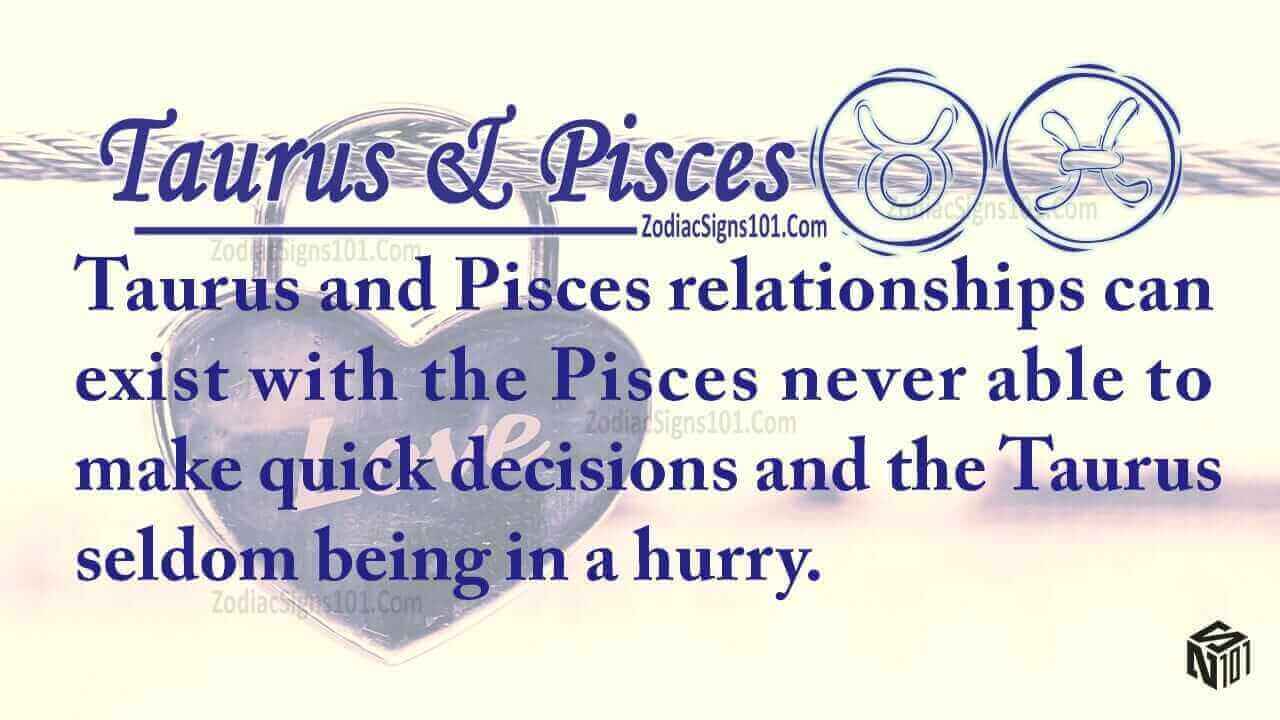 What do these two zodiac signs have in common and what does this mean for their compatibility?  Will they be able to connect on all levels or will they struggle to find any common ground? Take a look at this article to find out more about a Taurus/Pisces relationship.

A friend like Taurus (April 21 – May 21) isn’t one that would let a person down.  They’re ready to help anyone who asks and they’ll remain loyal for as long as they can.  They’ll give their time, money, and even gifts to show how much they care.  What they prefer, is a stable environment where they can build a home and make it secure for their family.  Part of their personality is their stubbornness and need to be right.  They love to be in love, so romance is important in their relationship.

Pisces (February 20 – March 20th) always want to help others, but needs encouragement to keep them on the right track.  Their preference is to help a group on a task rather than lead one.  Often described as moody, dreamy, and sensitive, they’re also intuitive and adaptable to their surroundings and the people they’re with.  They’re most comfortable being around other people and this makes them balanced between the real world and their imagination.   As a lover, they want to please their partner and allow their emotions to be their guide.

The similarities between Taurus and Pisces allow them to be more compatible than some would imagine.  They’re empathetic to each other’s feelings and enjoy deep conversations.  Both genuinely care and want to make sure the other feels secure.  At the same time, their personalities can get in the way of their relationship and their compatibility.

Positive Attributes in a Taurus/Pisces Relationship

Family and traditions are important values for both Taurus and Pisces.  Whether it’s immediate or extended family, they make them a part of their lives and enjoy spending holidays and celebrations with them. The traditions that they’re familiar with are crucial for them to share and carry on in their own family.  They also don’t hold back on gifts.  Holidays are exciting for them because they can bestow gifts and special presents.  They’re selfless and enjoy seeing the smile on their friends’ and family’s faces.

Friends are also important to both of these signs.  Just like they‘d take care of each other, they care for their friends with empathy and kindness.  They listen, they share, and they advise with a sense of calm that makes people comfortable when they need it most.  This is also ideal in times of sickness.  Both of them will nurse a friend or their loved one back to health or check on them frequently during recovery.

A sexual relationship between Taurus and Pisces overflows with romance and excitement.  Seduction plays a big role in their romance.  Gifts like flowers and candy are just a start.  There’s also couples’ massages or romantic getaways for two so that they only focus on each other.  Suggestive texts and other messages only build the anticipation for what they share together.  Pisces adds a little creative variety to pleasuring their lover.  They’re willing to try new things and explore as many options as possible that Taurus will also enjoy.

Negative Attributes in a Taurus/Pisces Relationship

While this couple shares values, interests, and a taste for romance, there are aspects of their personalities that keep them from becoming the dream couple.  For one, Taurus has a stubborn streak and strongly believes they’re correct so much that they’re not as receptive to compromise, even with their partner.  Pisces is more flexible and may accommodate to their wishes and demands. But, if they’re passionate or confident on their position, they won’t hold back on any argument.  They may also do what they choose and opt to leave out Taurus.

Another personality trait that differs between the two is their outlook.  Taurus is more practical and organized in their thoughts and plans.  They’re more likely to follow a routine in order to meet their goals.  Pisces is more focused on the adventure and follows their imagination more than a schedule.  This free spirit approach to life is likely to frustrate Taurus, especially when a sudden change of plans throws off anything they were ready to do as a couple.  Pisces may get bored with their lover when they’re not embracing their own creative flow while Taurus may start to believe that their partner will never be realistic and share the same goals.  Any argument will lead to someone’s feelings getting hurt, Pisces in particular.  They tend to be more sensitive and have their feelings hurt more with less effort than with other signs.  Even though Taurus is empathetic and careful about what they say to people, they may feel that they have to filter their words more in order to keep the peace.

Both signs need motivation to do some things.  Whereas Pisces goes with the flow, Taurus tends to procrastinate and work up to the last minute.  Without a focus on responsibilities such as chores, bills, and work assignments, they’re more likely to debate more about who failed or who needs to step up their game rather than get the job done.  The lack of accomplishments will drive a wedge further between them.

When it comes to compatibility, a Taurus/Pisces relationship is great fro dating.  Their days and nights will be filled with fun times along with family and friends, a shared interest in bringing joy to people, and a sexual romance that’s guaranteed to bring pleasure to both of them.  They have common interests and would be able to keep each other occupied in conversation and activities.  However, if they intend to take this relationship into the long term, they need to take a serious look as to how they’re going to work things out.  They need to accept each other’s differences and figure out compromise.  Taurus can work on being more flexible in order to consider other options while Pisces can focus on not giving up so easily when feelings get in the way of what needs to get resolved.  They’ll be able to remember what brought them together and share the same kind of love and care for each other that they give to their friends and family.