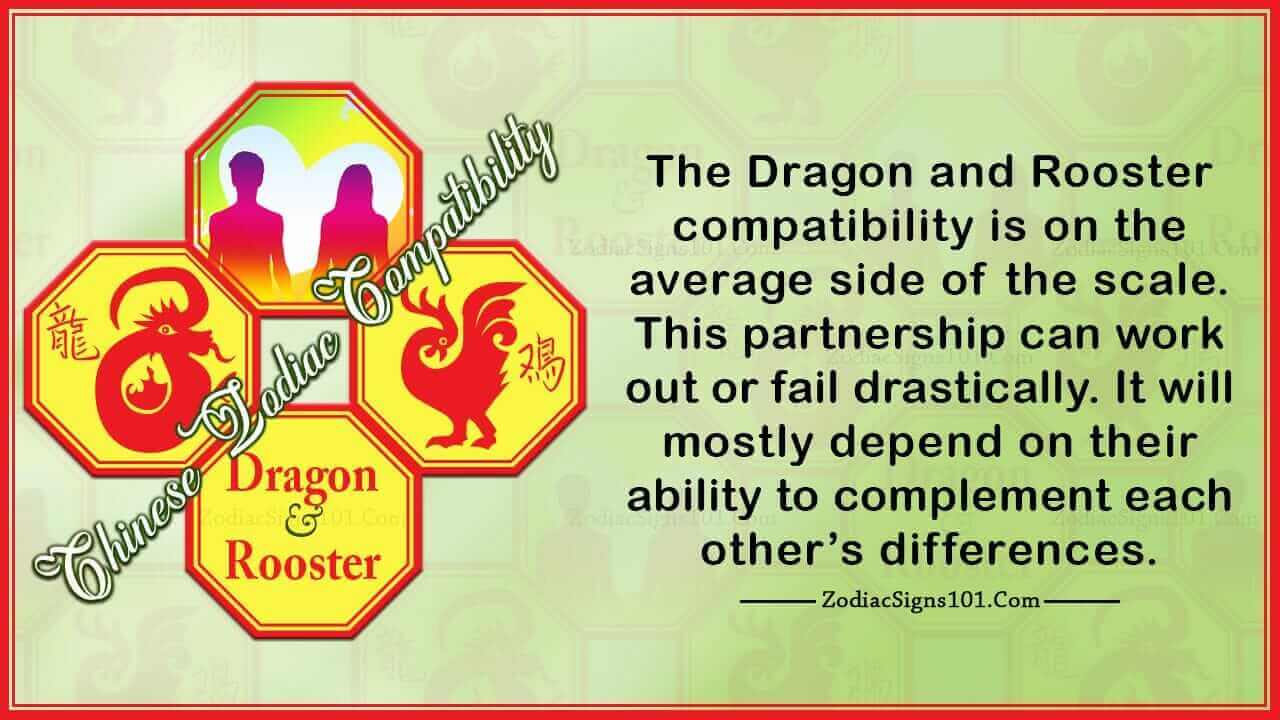 The Dragon Rooster compatibility is on the average side of the scale. This partnership can work out or fail drastically. It will mostly depend on their ability to complement each other’s differences. If they are able to do this, chances are, they will enjoy a very passionate partnership If they fail here, then their relationship will be filled with lots of conflicts. The Dragon Rooster compatibility looks like it has a  fifty-fifty chance of being successful. Will this be the case? Let us have a look at whether this partnership will be a success or a complete fail.

They Complement Each Other Well

The Dragon and Rooster are different. However, they can use their differences in a complementary way. The Rooster will be able to offer the Dragon the stability they really lack. When the Dragon gets over excited, the Rooster will try to bring them down.

In addition, the Rooster will offer their resourcefulness to the partnership. The Dragon can depend wholly on the Rooster to give utmost attention to each and every detail at hand. The Rooster will be tasked with handling the business end of things while the Dragon will keep their relationship fun and exciting. As long as these two are able to appreciate their differences, the odds of the Dragon Rooster compatibility being a success will be quite high.

A Shared Sense of Commitment

The Dragon and Rooster are very committed to each and every activity that they engage themselves in. The Dragon is loyal, faithful, and is always willing to share these traits with anyone that is loyal and faithful to them. On the other hand, the Rooster is very responsible and is always motivated by a genuine desire to offer service to others. Due to this common devotion, the two will put in the needed effort to make sure their relationship becomes a success.

The Downside of the Dragon Rooster Compatibility

Just like many other relationships out there, the Dragon Rooster relationship will not lack its own issues. Let us have a look at some problems that will face these two.

Dragons are quite social. They love to be out of the house where they meet lots of people and make new friends. They thrive through social exchanges and would never sacrifice this kind of lifestyle for anything. Due to their social nature, the Dragon will probably have a very large circle of friends. On the other hand, the Rooster is rarely interested in social exchanges. They would rather spend their free time at home where they feel safe and secure.

Due to these differences, these two will have different ideas of how they should spend their free time. The Dragon will suggest they go out while the Rooster will say they should stay in. They will start forcing their different social inclinations on each other. At this point, their relationship will have a very high chance of crumbling. They will have to make necessary adjustments in their characters. The Dragon will have to learn to live a steadfast life and the Rooster will have to enjoy a public life a little more.

Another issue that the Dragon and Rooster will have to deal with is the egoistic nature of the Dragon. This is because the Dragon’s ego makes them to be quite controlling in a partnership. The Rooster does not like to be controlled and will hardly follow the Dragon’s commands or decisions. The Rooster is a perfectionist and when they realize the decision made by the Dragon is not good, they will not hesitate to disapprove it. The Dragon will view the Rooster to be quite critical in nature. 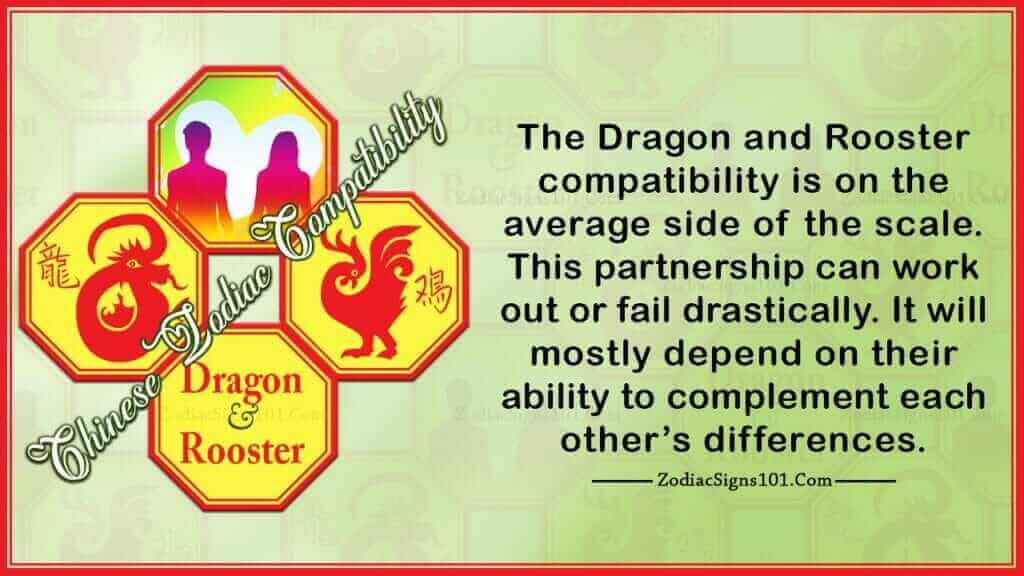 A relationship between the Dragon and Rooster can be a success or a complete failure. They are quite different. The Dragon is outgoing, fun loving, and always in search of mental stimulation. On the other hand, the Rooster is usually calm, withdrawn, and does not thrive well in public places. They will have very distinct views and will clash on various subjects. While one will suggest that they go out and have fun, the other one will suggest they stay in and enjoy their time at home. Due to this, it will be quite hard for them to get along so they will need to complement each other. It is only when they are able to do so that they will enjoy a happy and everlasting relationship.