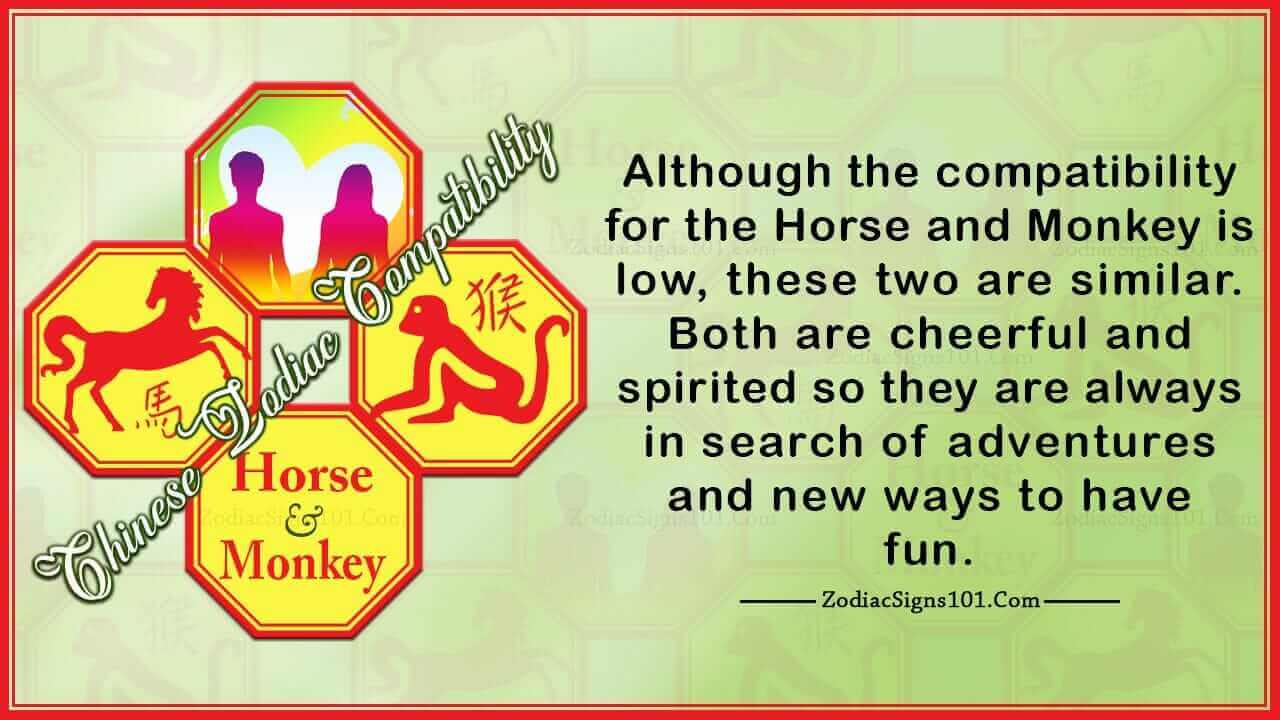 The Horse Monkey compatibility is low because the two are different and have a hard time forming a long term relationship. They possess different personalities, interests, and hobbies. Due to this, they find it hard to get along. Although both seem to be gregarious, the Horse is on the extreme side. The Monkey has a hard time getting along with the Horse. They need to put in hard work and effort if they want to achieve a happy relationship. It looks like there will be minimal hope for the Horse and Monkey. Will this be the case? This article looks at the Horse Monkey Chinese compatibility.

Although the compatibility for the Horse and Monkey is low, these two are similar. Both are cheerful and spirited so they are always in search of adventures and new ways to have fun. Therefore, when both of them come together, they love to go on adventures occasionally. Their relationship will rarely be a boring one. They will be able to keep each other mentally stimulated. Due to this, they form an exhilarating and exciting relationship.

They are Important to Each Other

The Horse and Monkey will be important to each other. They possess wonderful traits that will allow them to offer each other numerous benefits. The Horse is energetic so he offers all his enthusiasm and energy into the relationship. They work extremely hard to make their partnership successful. On the other hand, the Monkey is understanding. They are able to understand the Horse’s need to be out and about as much as possible. The Monkey will not keep bothering the Horse with commitment concerns. Also, the Monkey is also positive, high-spirited, and humorous so they will be able to offer the Horse the excitement and happiness they desire.

The Horse and Monkey are seductive and, as a result, they use their romantic side to seduce one another into lovemaking. While in the bedroom, the Horse offers its energy. On the other hand, the Monkey provides their creativity. They create a perfect blend that will aid them when forming an intimate physical relationship.

The Downsides to the Horse Monkey Compatibility

Although the Horse and Monkey are similar, there are things that hinder them when trying to achieve a happy relationship.

Will They be Ready to Settle Down?

The Horse Monkey compatibility brings together two partners that are outgoing and adventurous. They love to be out of the house whenever they can be. While out, they discover new people and places. Both love living their lives like this so they would not consider trading it for anything, not even their relationship. While still in a partnership, they still want to go out once in a while with their friends. They have to adopt a stable life if they want a happy relationship.

The Horse Monkey relationship combines two partners that are always in search of the public eye. This will be dangerous for them since it sprouts aggression in their relationship. The Horse is impulsive and acts fast when the two argue. On the other hand, the Monkey hates being defeated and will not back down when the two are faced with a disagreement. For them to have a long-lasting relationship, they have to learn to seek attention less often. This is the only way they will avoid getting jealous of one another. Also, they have to learn to solve their problems instead of competing over who is wrong or right.

The Horse Monkey relationship combines two of the most egoistic beings in the Chinese Zodiac. Both feel they know best and that their ideas are superior to others’ so they should be listened to without question. The Horse puts themselves first in everything and feels they deserve better treatment compared to others. 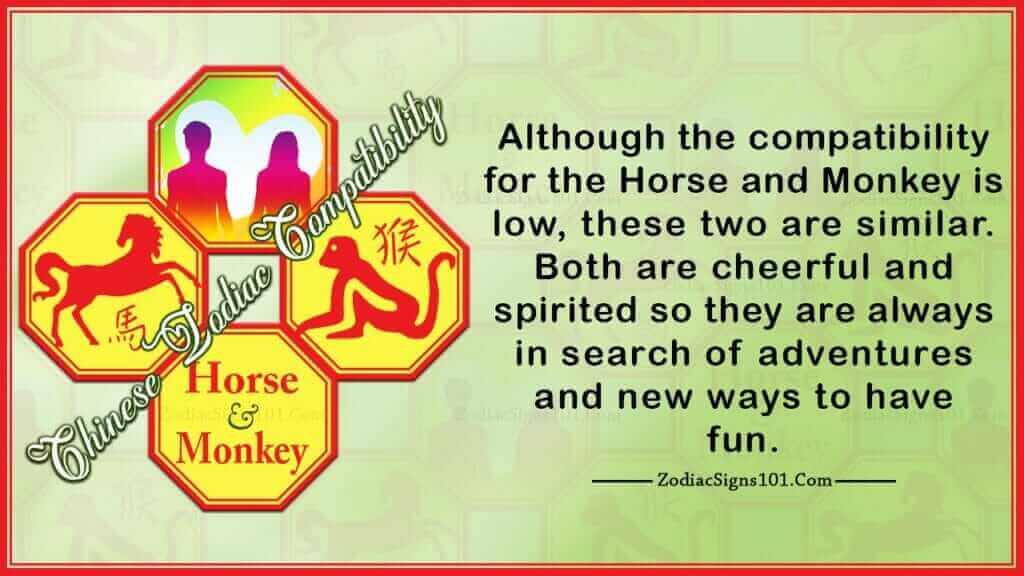 On the other hand, the Monkey believes they know everything under the sun. It is bad for them, especially when they are faced with a disagreement. They will not be able to solve it as they create a mountain out of a small issue. For them to enjoy a relationship, they have to learn to go easy on their egotistical nature. This is the only way they will be able to solve their issues. It also helps them along perfectly.

The Horse Monkey compatibility is not workable at all. Although the two are similar, they will have a hard time creating a long-lasting relationship. The two are outgoing and probably will not be ready to settle down. This means they will not be able to put in the required effort to make their relationship a success. They have to work on their ego in addition to their attention-seeking. An effort is needed from both sides to make their partnership successful. If they are not able to put in the needed work, they are better off as friends. This is because they end up hurting each other in the long run.