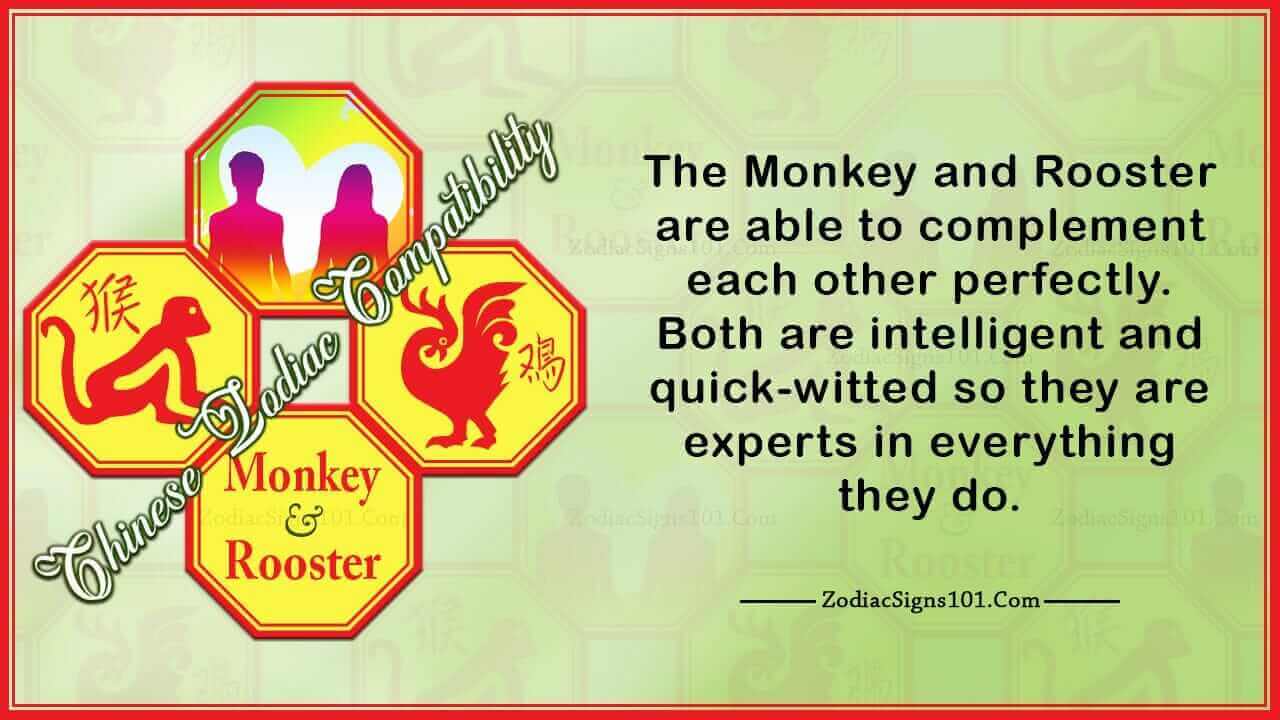 The Monkey Rooster compatibility is average since it does have the potential of being a success but might not work out either. Seeing as they are different, the success of their relationship depends on their ability to complement each other. If they are able to compromise, they can create a happy union. This partnership looks to be on the moderate side, will this be the case? This article looks at the Monkey Rooster Chinese compatibility.

The attraction between the Monkey and Rooster is strong. Each of them will fall for the other’s different and positive characteristics. The Monkey is sociable, friendly, and intelligent. These are some traits the Rooster will find fascinating. The Rooster loves joining the Monkey on their many explorations. The Rooster generally loves this new lifestyle the Monkey offers to them. On the other hand, the Rooster is dedicated, caring, and humble. Such attributes will be appreciated by the Monkey. They know the Rooster will take care of their desires in the best way possible. This strong attraction between them will set the foundation for the success of their relationship.

Although the Monkey and Rooster are seen as different, there are some things these two have in common. First, both are intelligent and quick-witted so they are experts in everything they do. Through their common intelligence, they come up with lots of ideas. They can implement these ideas together. They could be great business partners if they combined these traits. Moreover, they find each other’s sharp mind to be adorable. They challenge one another on a mental level. Through this shared characteristic, their relationship will be exciting.

They Complement One Another

The Monkey and Rooster are able to complement each other perfectly. The Monkey offers its gregariousness to the relationship. Through this, they take Rooster on many explorations. On the other hand, the Rooster is stable and practical. They help to bring the Monkey’s ideas into life and make them work. Through their stability, the Rooster encourages the Monkey to stick to their main course and not to deviate in any way. If they could continue supporting each other like this, the Monkey and Rooster are likely to create a long-lasting relationship.

The Downsides to the Monkey Rooster Compatibility

Due to the many differences the Monkey and Rooster have, there are some issues that are likely to face them. This part of the article looks at the potential problems that will face this partnership.

A Monkey Rooster compatibility brings together two egotistical characters of the Chinese Zodiac. Due to the Monkey’s intelligence and exploitative nature, they think they are a know-it-all. The Monkey, therefore, expects people around them to follow their decisions without question. This individual tends to be enraged when someone tries to oppose their opinions. 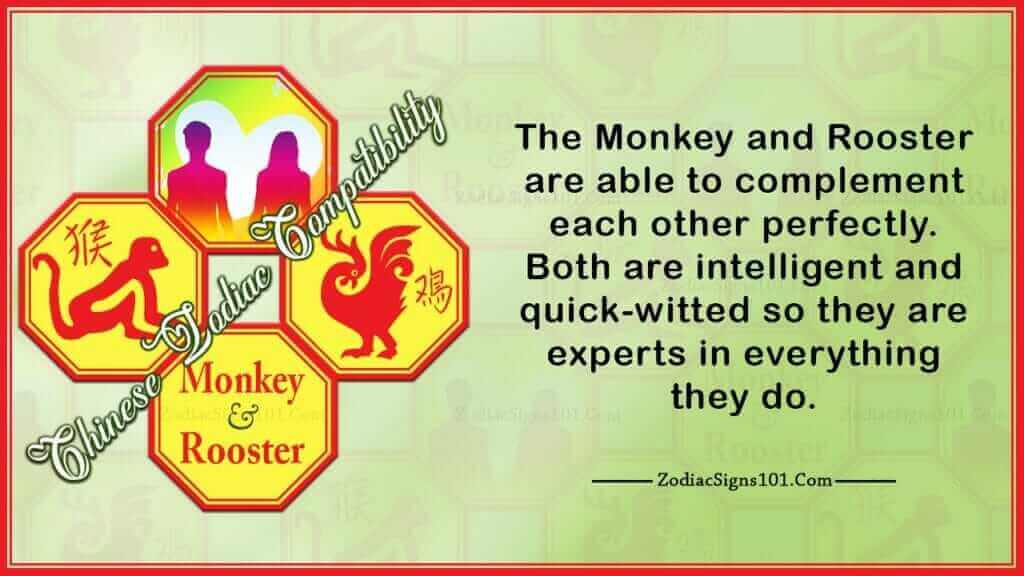 Oppositely, the Rooster loves it when everything around them is in perfect shape. Because of this, the Rooster believes their opinions are perfect and should be implemented without a doubt. When two partners like this come together in a romantic relationship, they occasionally disagree. It is until they work on their self-centered nature that they have the ability to form a wonderful relationship.

The Rooster is a natural perfectionist so they are detail-oriented and attentive to what happens around them. The Rooster feels there is always room for improvement in whatever they do. Therefore, they work hard to make things better. Problems arise when the Rooster pushes the Horse into being perfect. The Rooster will, at some point, want the Monkey to stop partying and take care of things at home. Since Roosters value their freedom, the Horse needs to calm down if they do not want the relationship to end.

The Monkey Rooster compatibility is on the average side but has the potential of working out. At the same time, the relationship can be a complete failure. The two lovebirds are different and this may hinder their success. However, they can have an amazing relationship if they work together.