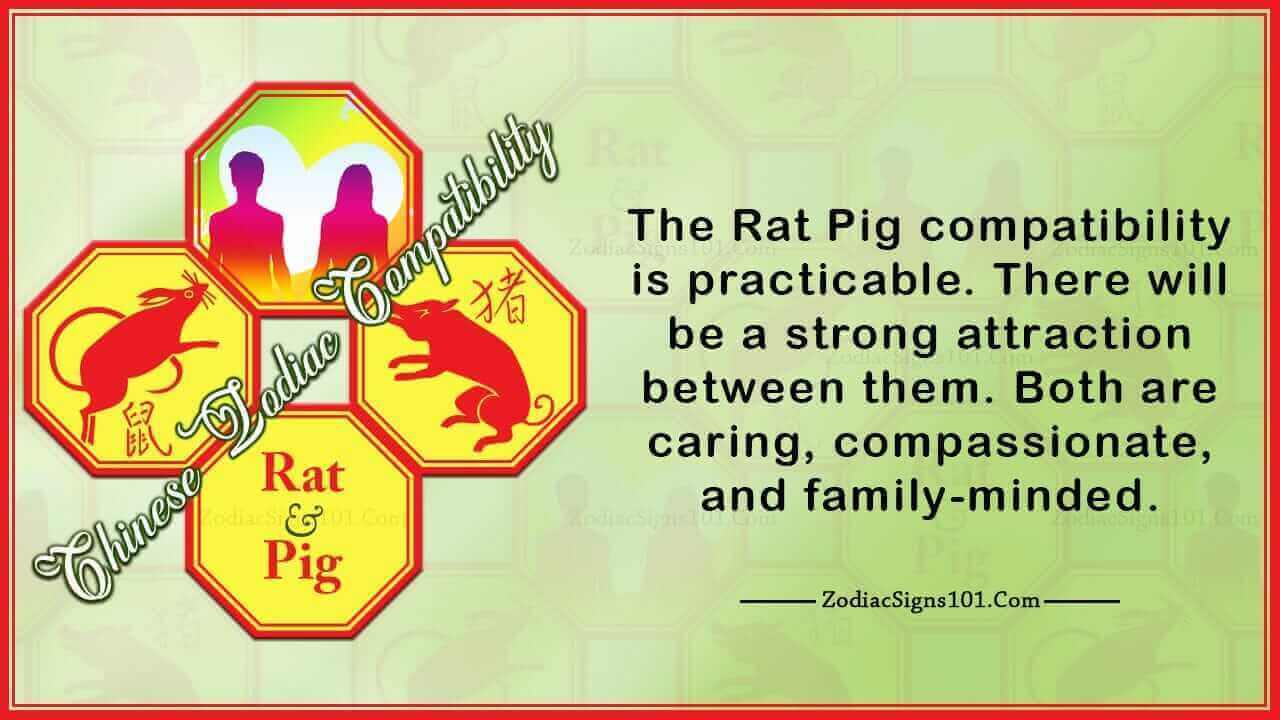 The Rat Pig Compatibility relationship might look strange at first. The Rat and Pig are different. However, on the inside, this relationship is workable. They are able to blend between their numerous differences to create a perfect match. They get along quite well since they share a lot of similarities. Both are caring, compassionate, and family-minded. They will thus work hard so they can make their relationship successful. Moreover, they will create a great mutual understanding between them. Also, they respect each other and will be able to handle any issues between them.

There will be a strong attraction between the Rat and Pig. They will be attracted to each other’s different traits and approaches towards life. The male pig will be fascinated by the beauty of the female Rat. He will love the ease she communicates with. On her part, the female Rat will fall for the caring and compassionate nature of the male Pig. She will also love his intelligence, creativity, and innovativeness.

However, there will still be a strong attraction if at all the Pig was female and the Rat was male. The female Pig will admire the warmth and companionable nature of the male Rat. She will also fall for his idealistic and visionary character. She knows that there will be great things in store for the future if she chooses to remain with this man. On his part, the male Rat will be attracted to the charm and beauty that the Pig lady holds. He will also fall for her kindness, humanity, and love. The strong attraction between these two will create the foundation for the success of their relationship.

There are a lot of things that the Rat and Pig have in common. First, they are both family-oriented. They put their families first. They love to be around family and friends at all times. In addition, they are both loyal and faithful to those they hold dear. This will be very important for their love match as it is evident that they will put in the needed effort to make their family great.

Another thing that they have in common is that they are both sociable. The Rat loves to be out of the house where he meets a lot of people and makes lots of new friends.  Rats also thrive on social exchanges and generally love to talk. On the other hand, Pigs are sociable in their own unique way. Despite the fact they love to keep things to themselves, they are highly likeable individuals. They show love and care to all those around them. These similar traits will suit them quite well. It will enable them to get along quite easily.

They Will Form a Financially Stable Relationship

The Rat and Pig are both good at making money. Although Pigs may seem to be a bit lazy, they love finer things and therefore they must work for them. But although they are lavish spenders, Pigs keep their finances in respectable order. On the other hand, the Rat is an expert when it comes to making money. The Pig can thereby entrust the Rat to make all money needed in this relationship. A combination of these two will then create a home where there will be minimal cases of financial instability in this relationship.

The Downsides of the Rat Pig Compatibility

The Rat Pig compatibility looks to be very ideal. However, this does not mean that they will not have some issues between them. Let us have a look at some possible drawbacks of this relationship.

The Rat and Pig have distinct personalities. While the Pig is caring and compassionate towards other people, the Rat is all about achieving personal goals. Due to this, the Pig might conclude that the Rat is selfish. On the other hand, the Rat might see the Pig’s efforts to help others as useless. They simply will not understand each other’s view of life. They will have to be patient with each other and take time to comprehend how the other partner works.

The Two Need to Work on Different Emotional Levels

The Rat and Pig are different when it comes to showing their feelings and emotions. The Rat is emotionally aloof and keeps emotions closely guarded. Rats do not like to showcase their feelings to the world. On the other hand, Pigs are sentimental and have their own way of showing emotions. In the Rat and Pig relationship, the Pig will expect constant reassurance from the Rat. This is something that the Rat will definitely not be in a position to offer. The Pig may end up being disappointed as he or she will feel unloved. Due to this, the Pig may end up looking for other options where he or she will feel loved and treasured. They will have to create an emotional balance if they want their relationship to be perfect.

The Rat Pig compatibility is practicable. There will be a strong attraction between them. The Rat will be attracted to the Pig’s stability, tenderness, and compassion. On the other hand, the Pig will be attracted to the Rat’s free-spirited and carefree nature. This strong attraction will create the basis for the success of their relationship. In addition, they also have some similar traits that will help them to get along with each other. Despite this, there are some issues that will come between them. These issues will be caused by their personality differences. The success of their union will depend on their ability to solve the problems that will come between them.