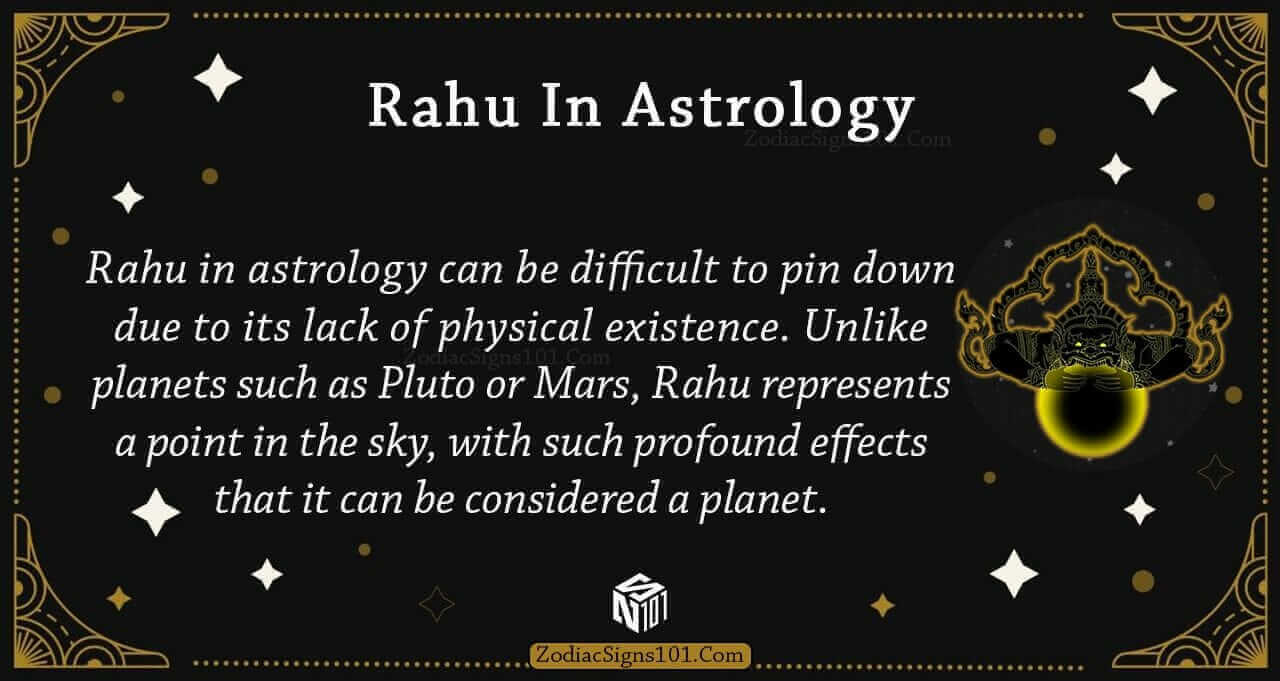 Broadly, Rahu in astrology can be difficult to pin down due to its lack of physical existence. Unlike planets such as Pluto or Mars, Rahu represents a point in the sky, with such profound effects that it can be considered a planet. This point is the Moon’s north node. Known as the ‘dragon’s head’, and is appropriately named due to its enormous effect on our behavior.

Rahu in astrology connected to potent energy. Its effects can be considered broadly negative, with Rahu representing thievery, manipulation, aggressive tendencies and poor habits. However, there is a dichotomy to Rahu that can turn these related effects into positive energies.

The aforementioned origin of the planet Rahu is unlike many of the other planets in the zodiac. Rahu in the astrology, in Hindu culture, was created by the gods and demons coming together, stirring the ocean to from longevity-granting nectar. A jealous demon disguised himself as one of the gods and placed himself on the left side of the Moon and the right of the Sun. Rahu stemmed from the head of this demon when the Sun and Moon revealed this disguise to Vishnu and beheaded it.

This caused eternal enmity between Rahu, it’s partner, Ketu, born from the body of the demon’s corpse, and the Sun and Moon. As a result, Rahu in astrology is strongly connected to scheming, planning, an arrogant nature, and jealous tendencies.

Rahu almost always moves in retrograde, though this can be difficult to read due to the location of Rahu in the sky is an intersection point. This is where the paths of the Sun and Moon cross, rather than a physical object.

Rahu will change zodiac signs once every eighteen months and will make a complete orbit of the whole zodiac in 18 years, wherein powerful changes can occur while it exerts forces on one’s life. These can explain many periodic shifts in mood, passion, and interests in certain fields. Due to Rahu’s nature as a shadow planet, those affected can become obsessed with the dark, underground areas, and ferrous compounds.

People born under Rahu can have a number of traits. When positively placed, such as in Taurus, it can create planners, intelligent thinkers, and politicians. However, the negative effects of Rahu’s influence can also be potent. These include encouraging vices such as smoking, drinking, gambling, bad hygiene and jealousy, and poor financial sense.

Rahu in astrology is a double-edged sword. Those who boast great intelligence and social stature are often such due to Rahu’s influence, such as politicians, investigators, and managers. In addition, Rahu is often associated with the darker underbelly of professions and personalities.

As a result, many miners, in a physical sense, and with drug dealers and casino workers in a moral one. The effects of Rahu in astrology are not wholly good or wholly bad, as, with many planets, however extreme cases of these are frequent, owing to the powerful origins of Rahu as a planet.

The important lessons to learn when studying Rahu in astrology are twofold. The first is Rahu’s power. This shadow planet can wildly and potently affect a person’s personality, profession, and choices. This is for better or for worse in extremis. The mainstay of the positive effects of Rahu in astrology, be it in the more mainstream aspects of society, such as in politics or media, or in the rather more unsavory, darker parts of our society.

It is these dark influences that can be difficult to escape. Rahu, as a result, can be responsible for moments of weakness and rough patches. This is due to its long time in any one zodiac. It is a powerful planet, but this power can be corrosive and damaging.