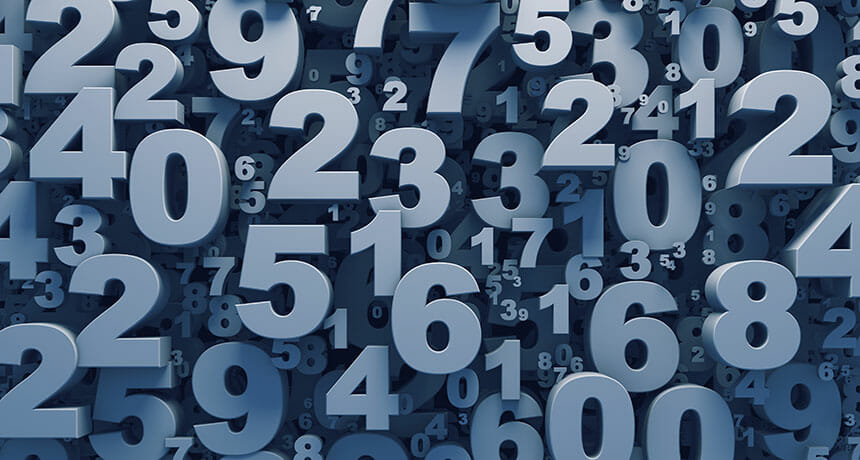 Numerology Numbers and their Meanings

Numerology, simply put, is the art of pulling guidance and meaning from a string of numbers. There are special numbers (Life Path numbers) that are meant for you. However, other numbers can also provide you with meaning and messages. Math helps people to understand things like time, money, and so many other things. Numerology is a spiritual kind of math that helps people to understand relationships, life, jobs, rough patches, and so on.

Numerology numbers show themselves in varying ways. Through the date, the time, your or someone else’s birthday, a license plate, the number of letters in your name, you can find deeper meaning in the world around you.

Numerology has ancient roots, which help to make it all the more impressive. Some people see this art as a link to the Bible, Tarot, the Hebrew Kabbalah, and Astrology. All of these studies use numbers so show varying and important things. Some studies are finding that Numerology goes back to the ancients of Greece, Egypt, Japan, Babylon, China, and Rome.

Your Life Path number is also known as your Birth Path number. It’s easily calculated by using your date of birth. It will open a whole new world of communication once you find it. Here is an easy, three-step calculation to find it.

Everyone’s Life Path number means a different thing. These numbers can give aid in a couple of different things. They can give hints towards hopes and fears, personality traits, career decisions, struggles in life, talents, and romantic partners.

If someone has a single digit number, then the meaning is pretty easy to find. However, if the number is a double-digit higher than ten but is not 11 or Twenty-two, then it gets confusing. If your number has two digits, then all you need to do is either take the meaning of both numbers for different messages, or you can find a way to combine the two that feel right to you. When trying to find a meaning that works well, try not to stress over it too much. You will know when you have found the right meaning.

Cardinal Numerology Numbers and Their Meanings

One stands for creativity, independence, and change. These people are the first to make a change. They are also brave and focused. If you are the leader of a group that has someone with this Life Path number, then you might want to keep your wits about you. They can be a tad rebellious at times. They have a habit of hiding their insecurities behind their humor.

Number Ones are made amazing leaders that have creative ways of overcoming different obstacles that may arise. Great jobs for Number Ones are managers, investors, CEOs, or entrepreneurs. Their strength can sometimes come off as demanding and critical because they tend to be perfectionists. However, they are usually fair. They are honest and impassioned. Despite how creative they are, they also have a talent in coming to practical actions and solutions.

Two is a sign for balance. It is sturdy, reflected, and diplomatic. Number Twos can bring change, conflict, and agreement. Some people feel that Two gives more a feminine vibe because the balance that comes with it naturally gives a sense of strong emotion, persuasiveness, and compassion.

The best jobs for people with number Two are teachers, therapists or counselors, diplomats, mediators, negotiators, and caregivers. They are artistic, poised, influential, deep thinking, social, charismatic, and trustworthy.

Three is branching away from the starting roots. It is the growth of being able to express oneself. This number is also seen as one of the strongest because it contains so many triplets: the beginning, middle, and end; birth, life, and death; Heaven, Earth, and Hell; the body, soul, and spirit.

People with the number Three are outgoing, easy to talk to, charming, optimistic, and fun loving. If you are going to talk to someone with the number Two, make sure to leave yourself a decent window of time because they can be highly talkative and it may take them a while to finish their ideas.

The number Four is a whole circle. You have the four seasons, the four elements, the four cardinal directions on a map or compass, four arms lines to a cross, and so on.

Those who are born with the number Four are quite special because they are difficult to throw off balance. They work best with sciences or jobs that deal strongly with discipline. These people are also easy to depend upon, but they have some trouble relaxing at the end of the day. Four people are loyal, organized, strong,  they attention to detail and they have a system of some sort of almost everything.

Five is another completed circle like Four, but with another connection. With the number Five, you have the five senses (touch, hearing, sight, taste, and smell). Flowers such as the lily have five petals.

People linked with the number Five are very friendly and social people. They do best in fields like sales, hospitality, real estate, and other jobs where they have the chance to interact with others while getting a job done. These people are usually restless, loving, wondering and longing for adventure, non-judging, and free-spirited.

Six is seen as the ultimate balancer. There are six sides to a die, six points to the Star of David and the Seal of Solomon. This number is also thought to be the bringer of chance (think of the dice), love, beauty, luck, and health. The main reason why the number Six is the thought to be the biggest balancer is because of the way six-pointed stars point. The four elements and sexes. The upward points showing male, the Heavens, and Fire while the bottom points gesture more towards Water, the Earth, and women.

People of the number Six are some of the kindest, caring, and compassionate people roaming this planet. These people are always feeling the need to help someone with whatever they can. Because of their desire to help others, the best jobs for Sixes are teachers, stay-at-home parent, counselor or therapist, and a nurse or a doctor. These people are peaceful, supportive, nurturing, and they give some of the best advice you could ever hear.

The number Seven is finality for a lot of groups. Looking at it, there are seven musical notes, days of the week, Pillars of Wisdom, Ancient Wonders of the World, and ages of man. Seven is a completion: Three (body, soul, and spirit) plus Four (Water, Fire, Earth, and Air).

Number Seven people are very interesting people. They rarely care about what or mind what people think of them. They are quiet, intuitive, fair, and sensitive. People who have these traits almost always are deep thinkers and analytical problem solvers as well.

The number Eight is often showed in the final step. Circles and squares become an octagon with eight sides. This number brings rhythm, resurrection, Felicity, and regeneration.

Those people under the number Eight driven by hopes and wants of success. Because they want success, they are sometimes blunt. They think it is the best way to get things across to get things done. They are practical and hardworking leaders that are willing to take risks and they make good diplomats.

The number Nine is very powerful because it is a multiple of Three. There are nine-pointed stars. They hold the meanings of fire, man, mountain, cave principles, water, and women.

People who are leaders with the number Nine are seekers of justice and they are strongly passionate as they to reach it. They have an ever-steady ground of what is right and what is wrong. At times, their sense of this can be strong enough that it makes them hard to talk to but they are almost always willing to help others. They are nurturing, loyal, compassionate and creative, and they can be a bit spiritual.

These people are very hardworking leaders that do not like wasting time that could be spent doing something worthwhile. These people are stubborn and usually, don’t relax until everything they had planned is done and dealt with. Ten leads people to be positive and strong without being overbearing and harsh when they are leading others.

Despite being a leader, people guided by this number can be rather submissive towards others. They are smart and daring while being creative and having a strong and vivid imagination that can power them with new ideas when they are struggling with something.

Master Numerology Numbers and Their Meanings

The number Eleven is a bit of a tricky one when it comes down to it. Eleven provides a connection to the subconscious. This number brings imitation and dreams, but it is not always the best at reaching those dreams so it can spike insecurities and fears.

People being lead by the number Eleven are usually introverts because their insight is a blessing and a curse sometimes. They love to dream but they do not like other people’s drama so they can make up their own in their daydreams but then they need to recharge from other people’s. These people are free-thinkers, inspiring, empathic, usually anxious, and they hold a sort of intrigue that draws people to them. Number Elevens are most likely to be Psychics.

People lead by the number twenty-two are strongly connected to their Higher Self as well as their spiritual guides. Twenty-twos people are amazingly selfless. However, that sometimes brings them problems because when they get caught up in taking care of or helping others. When this happens, they forget to take care of themselves. They are humble and wise visionaries. If there is anyone that gives others around them the feeling of a peaceful old soul, it is people lead by the number Twenty-two.

There are many different numerology numbers, and while this is the just the basics of the most powerful numbers, it is a decent start. Following articles will be covering more of these numbers and what they mean.

Each person wondering the Earth have different numbers and they are special to them. It is possible for more than one person to have the same number, but the number means certain things that might night apply to others.