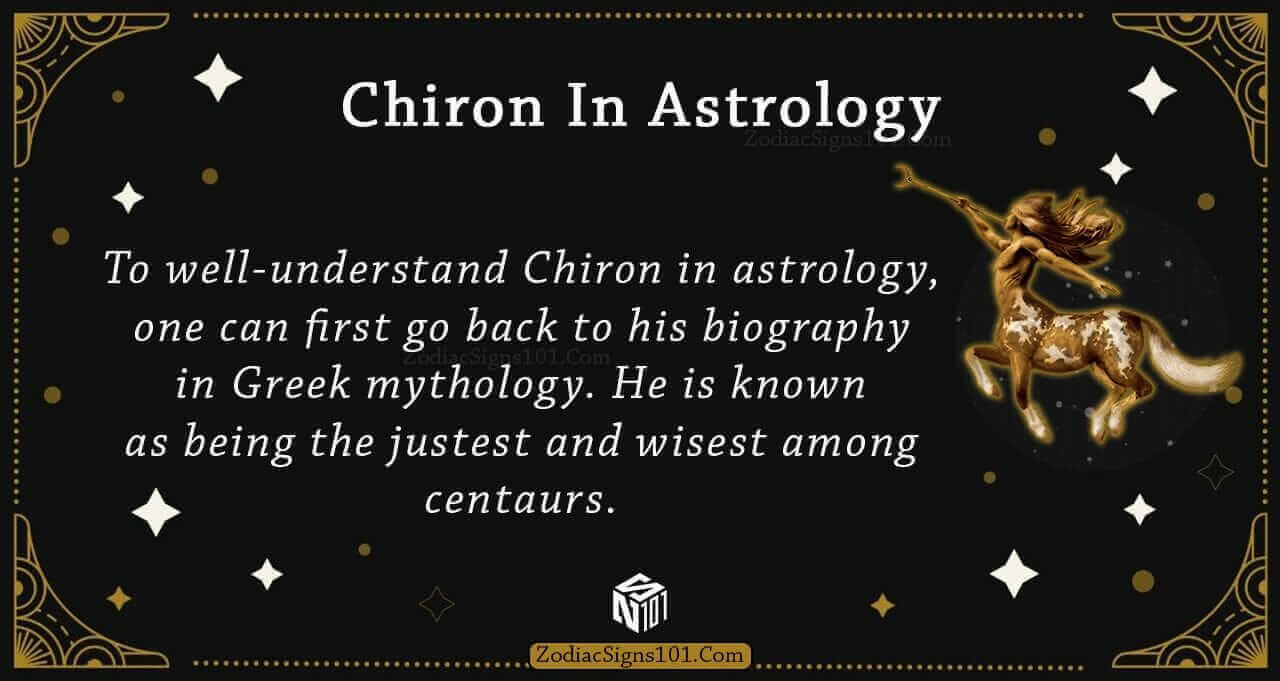 To well-understand Chiron in astrology, one can first go back to his biography in Greek mythology. He is the justest and wisest among centaurs. He is an immortal Apollonian as opposed to others Dionysian centaurs, gods and semi-gods notorious of being lecherous, wild and drunkards.

Chiron, the son of Saturn, half human and half horse, a centaur having come out of an illegitimate sexual affair, first abandoned by his mother Philyra out of shame and disgust. He was then adopted and raised by the wisest Appolo himself as a foster father, learned the art of medicine, herbs, music, archery, hunting, gymnastics and prophecy. He rose over his beastly nature, becoming a healer and a wise tutor, the teacher of masters, mostly the Greek legends, including Achilles and Dionysis, giving them insights into the art of healing and prophecy.

Chiron was discovered in the late 20th century. Its nature icy, ice originating from water, one of human four natures related to emotions and feelings. However, when orbiting around the sun, Chiron’s icy nature turns out to be gas. This refers to human spirituality.

Chiron in Astrology and Mythology

The nature of the role of Chiron in astrology can be easily understood from his mythological accounts. First and foremost, he is a centaur who was left by his parents. He suffered from a legacy of rejection that he experienced very early on in his life, an experience that made him take care of himself, carving his way to become a healer to wounded people.

Also, there is another account claiming that he experienced a very dramatic death, having sacrificed himself to enable human-kind from using fire. He was terribly injured when a poison arrow struck him in the knee. Try as he might, Chiron was unable to heal himself. The pain accompanied him for the rest of his life. Therefore, Chiron’s death has a sense of irony in that he was not able to heal himself. His being the master of healing could not save him. So, he willingly gave up his immortality. Zeus took pity on Chiron after his death and placed him in the stars for all to see.

The word “healer” perfectly represents the planet Chiron. This represents the deepest wounds of ours in relation to our efforts to heal them. People can make use of his positive energy, facing all kinds of adversity and low self-worth to overcome the wounds.

In other words, there is a duality between lower and higher characteristics of human beings. This originates from Chiron’s status as a centaur who became a wise master of healing. On the same way, “a- looked-down” wounded human has the potential to make a change. Helping others, healing their wounds, and, thus, turning lemon into lemonade make us more like Chiron.

We might not succeed in helping ourselves out. Deal with the wounds that seem to be there with us all our lives. Sometimes, it might be, if it is not indeed, insurmountable. Still, in our attempts to seek remedial solutions to our wounds, we get the right experience and knowledge that enables us from helping others. Hence, we become wounded healers in like manner with Chiron.

In brief, once you are born, you have to accept your fate. Life does not supply you with that magical stick with the mantra ABRACADABRA, and bingo! Your problem is over. Absolutely no. This is the rule of life. Nobody is immune to problems and crises, be it physical, spiritual or psychological.

You might have problems that will just co-exist with yourself the whole of your life on planet earth. Your problems seem insurmountable at times. You might choose to go on singing the blues so long as you live. On the other hand, you might be intelligent enough to understand that such problems are just there to polish your personality.

Use these challenges to become a greater person, understanding that it is much more of the spiritual, mystical dark night of the soul, acquiring the most important prerequisites that make of you a wounded healer, just as surely as Chiron.